The portrait miniatures conservator who sees the bigger picture 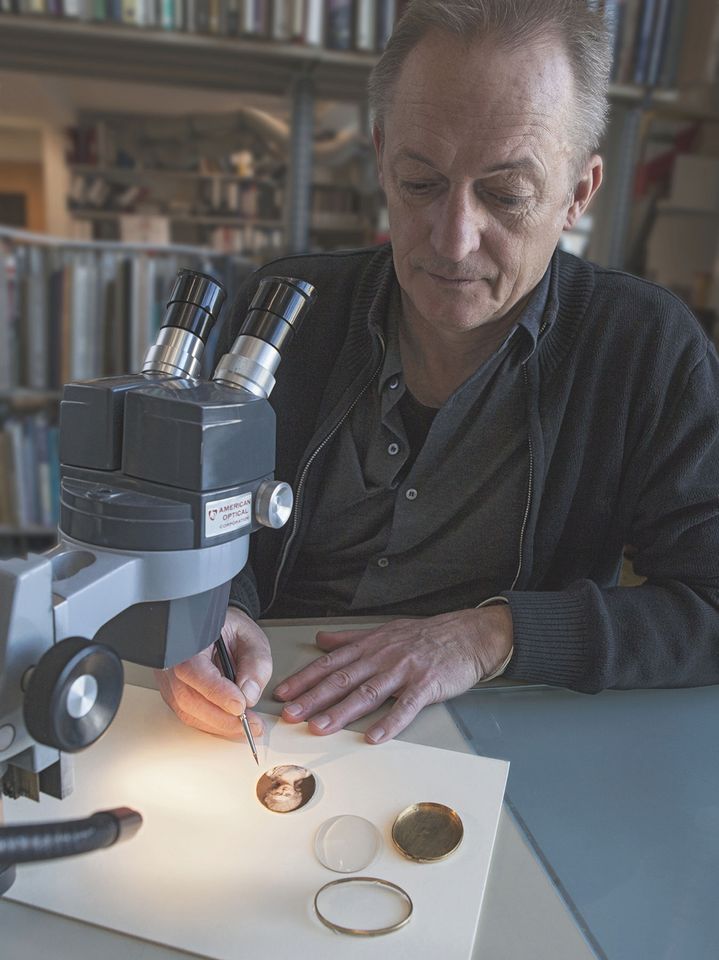 If you ask Alan Derbyshire how he came to specialise in the conservation of portrait miniatures, he says it was “being in the right place at the right time”. He joined London’s Victoria and Albert Museum (V&A) as a paper conservator in 1983 and later spent two years training under the museum’s miniatures expert Jim Murrell. He assumed the role of the V&A’s go-to person for miniatures after Murrell’s death in 1994 and has gone on to become a world expert in their conservation. His achievements in the field have not gone unnoticed. Derbyshire is the recipient of the 2018 Plowden Medal—the highest accolade in conservation awarded annually by the Royal Warrant Holders Association. We asked him about his work, his favourite artists and what collectors need to know.

The Art Newspaper: What are some of your favourites pieces that you have treated?

Alan Derbyshire: “It’s not so much individual pieces but artists such as Samuel Cooper, John Smart, William Wood and Nicholas Hilliard, who painted many famous faces including Queen Elizabeth I. Also Isaac Oliver, who was trained by Hilliard. You get a sense of it being an arcane, secret art that required one-on-one training to understand the materials and techniques involved.”

Tell us about your interest in the miniaturist William Wood.

“Wood painted around 1,200 miniatures between 1790 and 1808. He kept fee books in which he described in incredible detail how he painted each miniature. He constantly experimented with materials. The books, now in the National Art Library at the V&A, record details such as materials (for example, if he used distilled or river water) and how much he charged the sitter. It’s a goldmine of information. He also used a code for his pigments, so he wouldn’t have to write out their names in full and I’ve been working with conservation scientists to match the numeric code with specific pigments. I’m trying to get grants for this and to digitise the books. If we can make them available online, they will become a valuable resource for collectors and institutions.”

You often reconstruct miniatures to see how they are made. Could you tell us some more about that?

“Conservators don’t just mend objects—our expertise includes an understanding of materials and techniques. We often try to reconstruct how artists would paint using their treatises, examining miniatures and carrying out analysis. The problem is that there are often gaps in information about their processes. For example, Nicholas Hilliard describes how he painted rubies, emeralds and pearls. We know he would paint a tiny area of pure silver on the miniature’s surface and then use a hot needle to place a dot of coloured resin on to the silver. The silver acts as a reflector through the resin. The slight mystery was that [contemporaneous] treatises state that miniatures were placed in front of a fire, but they don’t explain why. We found that when you draw the needle away you are left with a little peak and not a globular ruby. When we placed the reconstructed miniature in front of a heat source, the resin went back to its perfect, globular shape. If we hadn’t done the reconstruction, we wouldn’t have known exactly how the process actually worked. This is the type of art technological research we’re doing to gain a fuller understanding of what we’re looking at.”

What are the most common mistakes that collectors make when it comes to caring for miniatures?

“Deterioration is often caused by mould, which occurs when humidity and temperature levels rise within the microclimate of the locket. Most people don’t realise that their portrait miniatures have mould because they cannot easily recognise it and once the damage is done it is hard to rectify. The ivory supports that were used from around 1700 can also warp and crack and the paint layers can flake. Often people lock their miniatures away in a drawer or bank vault for security reasons. I would not advise storing them on their own in a metal safe, as changes in relative humidity will be absorbed into the miniature. Instead I would recommend that absorbing materials such as paper or silica gel are placed with miniatures when in storage—these will act as a buffer against environmental changes. I would also suggest that collectors examine their miniatures every few months—and preferably with a magnifying glass as it is difficult to detect signs of deterioration with the naked eye.”

What about light levels?

“Miniatures, like all painted objects, can fade. Fading on them is more critical because the paint layer on the vellum or ivory [support] is very thin. Fading is irreversible—once it’s gone, it’s gone. I would never advise hanging a portrait miniature on a wall where natural light comes in. They really shouldn’t be on open display all the time. I would recommend a lockable display case or cabinet that is kept covered most of the time. At the V&A, we have devised a visitor-operated, infrared lighting system in which the lights are activated as visitors approach and they only stay on for four minutes at a time.”

“I have run workshops all over the world—the US, Canada, Europe, Australia and here in the UK. As you can imagine, it’s a very specialist field. You can’t train someone in portrait miniature conservation in two or three days so my workshops for conservators, curators and collections managers focus on training people to recognise conservation problems before they get too bad and require interventive work. I have also spent the last few years training one of my V&A colleagues, Dr. Victoria Button, in the more specialist skills required to carry out in-depth treatments - succession training is vitally important so that knowledge and skills are not lost."

How does it feel to receive the Plowden Medal?

“I’m honoured. It’s the highest and most prestigious award in the conservation profession. It’s especially important because it is the result of recommendations from peers and although the prize is annual, if they do not feel there is a suitable candidate, the award is not given that year. It’s wonderful for me personally but also for my colleagues and the V&A itself. More and more television programmes are focused on the public's fascination with how things are made and the materials and techniques used by artists. Anything that draws attention to the important work of the museum, our conservation department and the profession in general is great.”