‘You can’t exactly walk a picket line in a pandemic’: New York union leader Maida Rosenstein on the crisis for museum workers 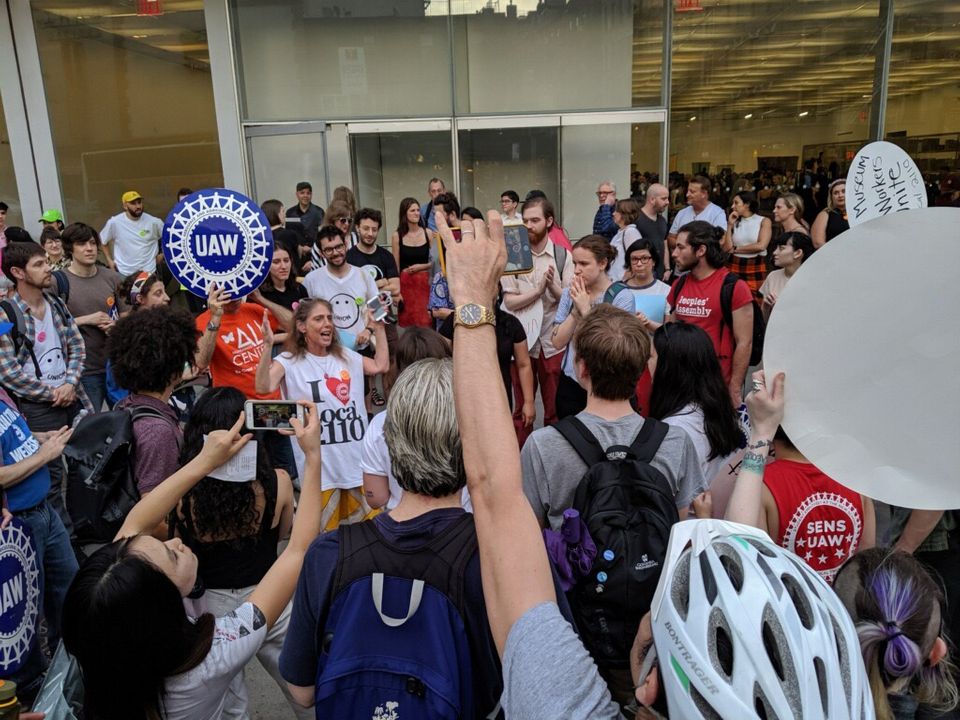 Maida Rosenstein (centre) at a union rally at the New Museum

Last week, the Museum of Modern Art’s director Glenn Lowry spoke with other institutional leaders about the cuts the museum would make to its staff and programming as it looks to reopen in the wake of the Covid-19 pandemic. Meanwhile, at museums across the country, the fallout from coronavirus has already spelled doom for freelance and contract workers. We spoke to Maida Rosenstein, the president of United Automobile Workers Local 2110, the union that represents hundreds of employees at New York museums, including MoMA, the Whitney and the New Museum, about what the organisation has been doing to maintain jobs for its members.

Were any employees laid off in MoMA’s reductions?

The museum eliminated positions through a voluntary retirement programme for qualifying people, basically a buyout. Other positions were vacated before the outbreak and will remain as such. Some workers were not granted employee status, like education contractors, and therefore MoMA could just get rid of them. This will inevitably create workload problems after reopening.

Were there negotiations in the lead-up?

MoMA had to negotiate with us last month as they made plans for coronavirus. They were already closed and losing money from ticket sales and retail. They wanted to eliminate more positions, but we eventually settled on two-year wage freezes to guarantee ongoing jobs.

As a union, how do you reconcile recent renovations with this news?

That whole plan is wrong, and not just with MoMA. Most cultural institutions are not publicly funded or viewed as resources for the welfare of people. They rely on wealthy donors and trustees financing them… These big museums want to become attraction spaces, which is very costly.

Why are museum unions gaining popularity?

We use our collective leverage to prioritise workers at the institution. Most museum employees are very committed to its mission and not just there to make money. Increased interest in unionisation shows these issues are part of a larger picture as museums become overly corporatised, commercialised, and disconnected from community outreach.

Those workers make vital connections between the museum and the community despite no job security or healthcare. They lead tours, give school programmes, and work with children. That the museum delegated these tasks to people who are placed in the most precarious employment conditions speaks to the view of its own educational mission. It’s unclear who will carry out these tasks now, and they may just do less of it.

At this point, direct action is out of the question. Their contracts are terminated, and a strike would be difficult. You can’t exactly walk a picket line in a pandemic.

about 6 hours ago
Assailing leadership, two former board chairmen say they are rescinding $50m in planned gifts to Baltimore Museum of Art