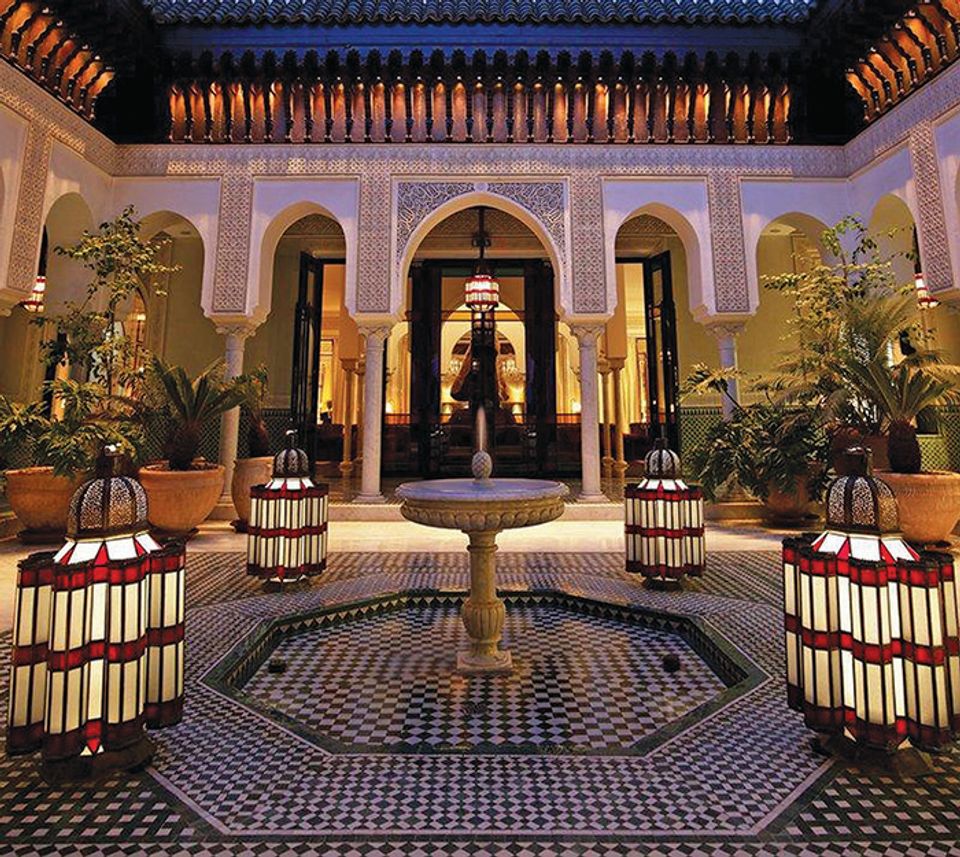 La Mamounia, the historic hotel that will host the fair Sutton

1-54, the six-year-old London/New York fair for contemporary African art, launches a new edition at Winston Churchill’s favourite hotel in Marrakech, La Mamounia, this week. Positioned on the cusp of Africa, Europe and the Middle East, and with a burgeoning contemporary art scene, Marrakech is a natural fit, says the fair’s founding director Touria El Glaoui, herself a native Moroccan.

A lack of state support means that Morocco’s art scene exists largely in the commercial sector, But the country’s pool of private patrons is still relatively small. Around 20% of the 100 VIP collectors who are expected to attend the fair are Moroccan, El Glaoui says. They include King Mohammed VI, who opened a museum in Rabat in 2014; the construction magnate Mohamed Bouzoubaa, who opened a vast new art space in Casablanca in November; and the real estate developer Alami Lazraq, who is launching the Museum of African Contemporary Art Al Maaden to coincide with the fair.

However, the bulk of buyers are not native. They include a stalwart group of French and Belgian collectors who have second homes in the country (“major collectors, not just boho second-homers”, El Glaoui says). In addition, a growing band of collectors from Francophone countries in Africa, such as Senegal and Cameroon, are expected to make the journey to Marrakech.

The mix of galleries is also international. Out of 17 exhibitors, three are from Morocco and ten are from Europe, including the London- and Berlin-based gallery Blain Southern, participating for the first time. Laetitia Catoir, a director at the gallery, says the growing local and regional collector base coupled with the spurt of museum openings were factors in deciding to exhibit. “Due to the strength of the fair’s VIP programme, we also expect quite a few international collectors to travel,” she says. The gallery is showing works by Abdoulaye Konaté from Mali and Moshekwa Langa from South Africa.

Given the current spotlight on contemporary African art, it is not surprising to see big international dealers arriving on the scene. But do the smaller African galleries worry about their artists being cherry-picked?

Not if the artists maintain relationships both ways, says Chahrazad Zahi, a director at ­Casablanca-based gallery L’Atelier 21. “You could think of it as competition, when in fact it creates visibility for our artists. We welcome them being placed with bigger galleries,” she says, noting that the Moroccan artist Safaa Erruas has recently started working with Officine dell’Immagine in Milan, also showing at the fair. In Marrakech, L’Atelier 21 will present a mixture of Modern and contemporary artists, including Saâd Ben Cheffaj and Yamou.

London’s Vigo Gallery has promoted art from Africa and the diaspora for the past six years and will offer rare works on paper from the 1970s by the Sudanese artist Ibrahim El-Salahi (priced at £25,000 each) and photographs by Hassan Hajjaj, the British-Moroccan photographer whose solo show closed at Somerset House last month (£2,500 to £15,000). Founder Toby Clarke says: “When there is strong interest in an area like this, time will tell which are the most enduring and interesting artists. Quality and time are the great levellers.”