While some sculptures go into hibernation, curators let winter work its magic on others 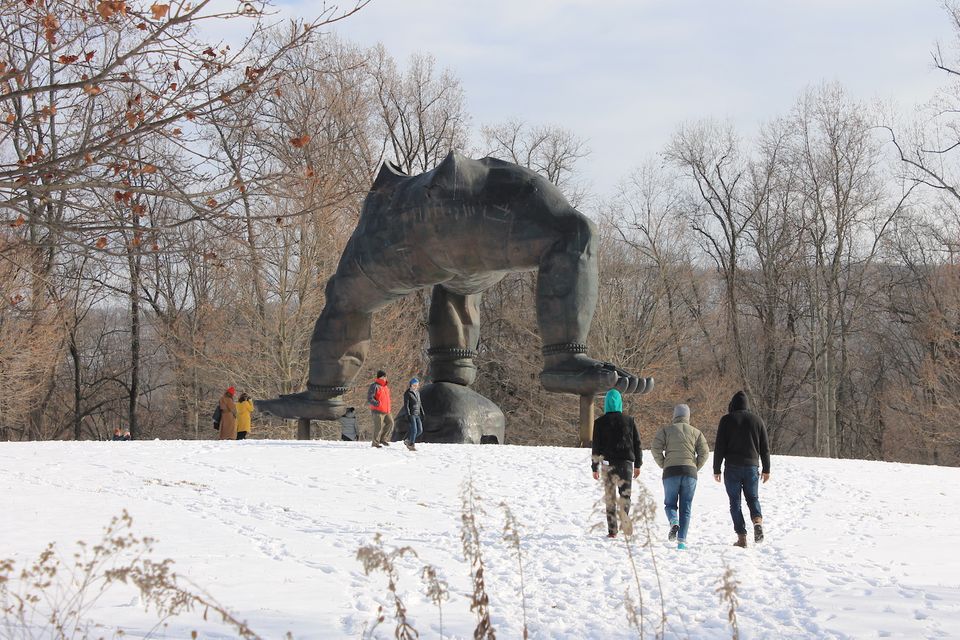 As frigid temperatures and snowfall descend on upstate New York in the wintertime, some sculptures in the Storm King Art Center enter winter hibernation, while others get bundled with plywood for the season. Nora Lawrence, the senior curator of the outdoor museum, says that more works remain outside than one would expect, and attests that the harsher weather does add an unmatched amount of magic to the panoramic sculpture park.

Among the works off-view in the winter are a series of eight abstract geometric sculptures by the artist David Smith that flank the entrance of the centre’s museum building—including the 1960 work Three Ovals Soar, in which three disks teeter from a thin stainless steel pedestal. “The works are surrounded by large trees and would make it, but it’s an added precaution, since these are smaller-scale works and important pieces for us,” Lawrence says.

A cornerstone of the collection, Isamu Noguchi’s granite “peach pit” sculpture Momo Taro (1977-78)—which the artist fashioned from a boulder found in the Japanese island Shōdoshima that he split in half when it was too large to move—is on view but partially blanketed. “It’s a touchpoint for people in our collection but there’s the danger of water collecting and freezing in the peach pit, where people climb in and sit,” says Lawrence. “We cover that entire part with plastic for safety reasons but also so that water can’t penetrate it and hurt the stone.”

The cedar and graphite work Luba (2009-2010) by the German-American artist Ursula von Rydingsvard, a monumental honeycomb-shaped work that is open to the air, is covered with plywood during the winter. The “drainpipe” portion of the sculpture Wayside Drainpipe (1979) by Claes Oldenburg and Coosje van Bruggen—in which water flows from a steel pipe positioned above a pyramid of stones—is also covered with plywood. Conservators additionally place supports inside Magdalena Abakanowicz's Sarcophagi in Glass Houses (1989) as a precaution against the snow’s weighing too heavily on the glass and steel roofs of the four structures.

Some works were made to withstand the elements, such as Richard Serra’s site-specific weathering steel sculpture Schunnemunk Fork (1990–91). “Serra wanted his works to age slowly and naturally,” Lawrence says. “Summer is actually a bigger issue for works like this, with people inadvertently rubbing sunscreen on a lot of surfaces, which can be a huge issue.”

Maya Lin’s undulating earthwork Storm King Wavefield (2007-08) will never move, but winter increases its drama. “The snow cover on Wave Field is different from one side to the other because of the direction of the sun for half of the day,” Lawrence says. “Half of each wave is covered in snow while the other half is completely grass.”

“I think that seeing these iconic pieces in a totally different way is one of the real pleasures people have coming here on our winter weekends,” which are selected from among dates running from 15 February to 22 March, Lawrence says. “There are footsteps all through the snow and you can see where people have travelled—it’s beautiful.”

The works in storage and the works covered will see the light again when Storm King reopens on 1 April, with the final "winter weekend" taking place on 21-22 March. The 2020 season opens on 9 May with exhibitions devoted to Kiki Smith, Martha Tuttle, Ugo Rondinone and Rashid Johnson, who will present his 2019 work The Crisis, which has never been shown in the US. Johnson’s exhibition will be accompanied on two dates due to be announced by a trumpet performance and his ballet The Hikers, which will be reimagined for the vast landscape of the sculpture park.