A cacophony and a symphony: the musical Biennale

Venice will ring out to the sound of music this year, as the Biennale features works ranging from orchestras and prisoners’ work songs to hip-hop and wind chimes

Visitors to this year’s Biennale can expect to hear many more works than usual. Although the event has long been a multi-sensory platform, Okwui Enwezor’s main exhibition, “All the World’s Futures”, puts more emphasis on sound and music than ever before. A new, distinct space for live programming, called Arena, is just one of the areas from which sound will ring out throughout the Biennale.

Given the professed goals of “All the World’s Futures”, this increased sonic presence might have been predicted. Enwezor tells The Art Newspaper that it will be “a cacophony and a symphony; it will be many of those things, because I want a physical, strong experience that will carry people through”. In a statement replete with musical terminology, Paolo Baratta, the president of the Biennale, says that the experience has a further goal: “To investigate how the tensions of the outside world act on the sensitivities and the vital expressive energies of artists, on their desires and their inner song”. The artists featured here—and others in the Biennale’s main exhibition and in the pavilions, including Theaster Gates, Jeremy Deller and the duo Jennifer Allora and Guillermo Calzadilla—reflect the different ways in which music can be shaped into art: as a record of history, as an emblem of community and as a form of protest. In their different forms, they provide a soundtrack to Enwezor’s vision. 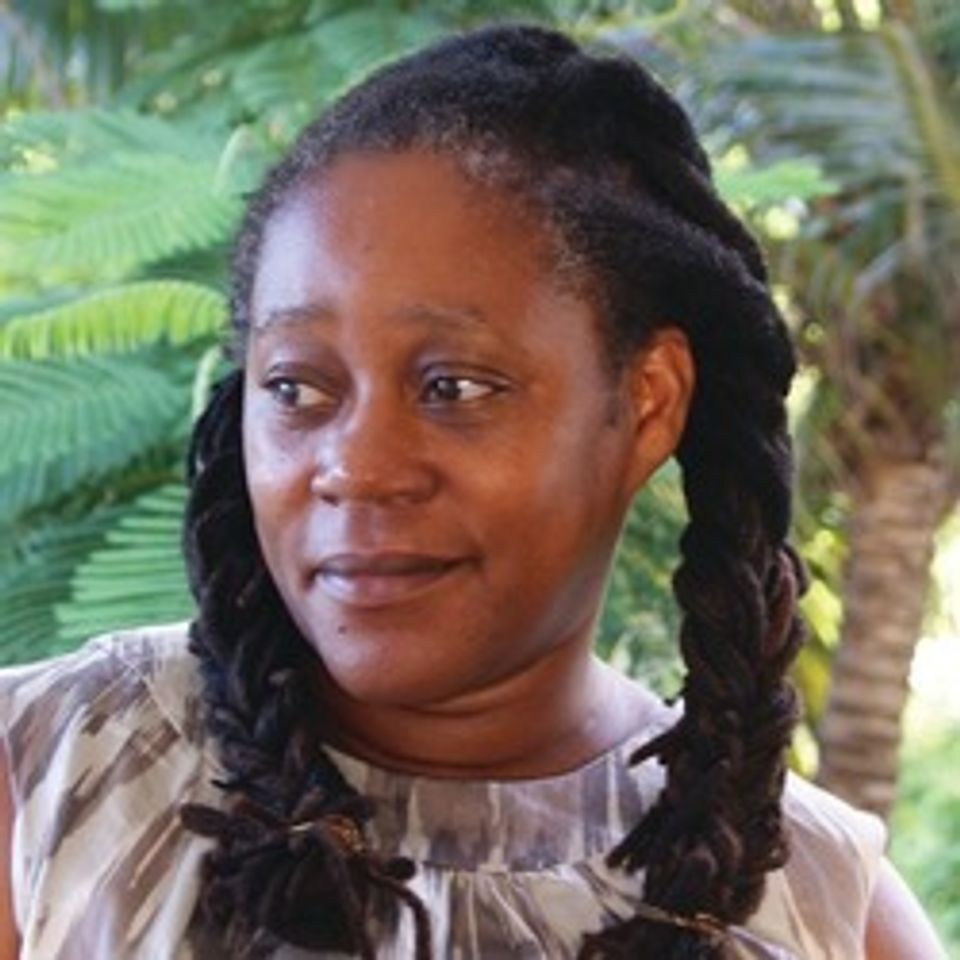 The combination of rapping and Dada-inspired poetry may not be an obvious one, but Sonia Boyce’s film of a high-energy performance by the US rapper Astronautalis and the British vocalist and poet Elaine Mitchener reveals surprising parallels.

The fast-paced exchange, which took place at London’s Victoria and Albert Museum in February, was as much of an unknown quantity to the artist as it was to the audience. “It was important that it was completely improvised. No one knew what was about to happen—the performers, the invited audience or myself,” Boyce says. She notes the contrast between the rapper’s connection with members of the audience and the poet’s more direct and forceful stance, describing them as two seemingly “incongruous figures who become simultaneously familiar and unfamiliar”.

A shared exploration of deconstruction and improvisation pulls together Astronautalis’s affinity with jazz and Mitchener’s inspiration by Dada. Boyce used the context of the museum, with its loaded historical and colonial references, as a background to the similarly complex cultural histories of jazz and Dada. She describes her crafting of the subsequent 30-minute film as a “re-entry” into the work. 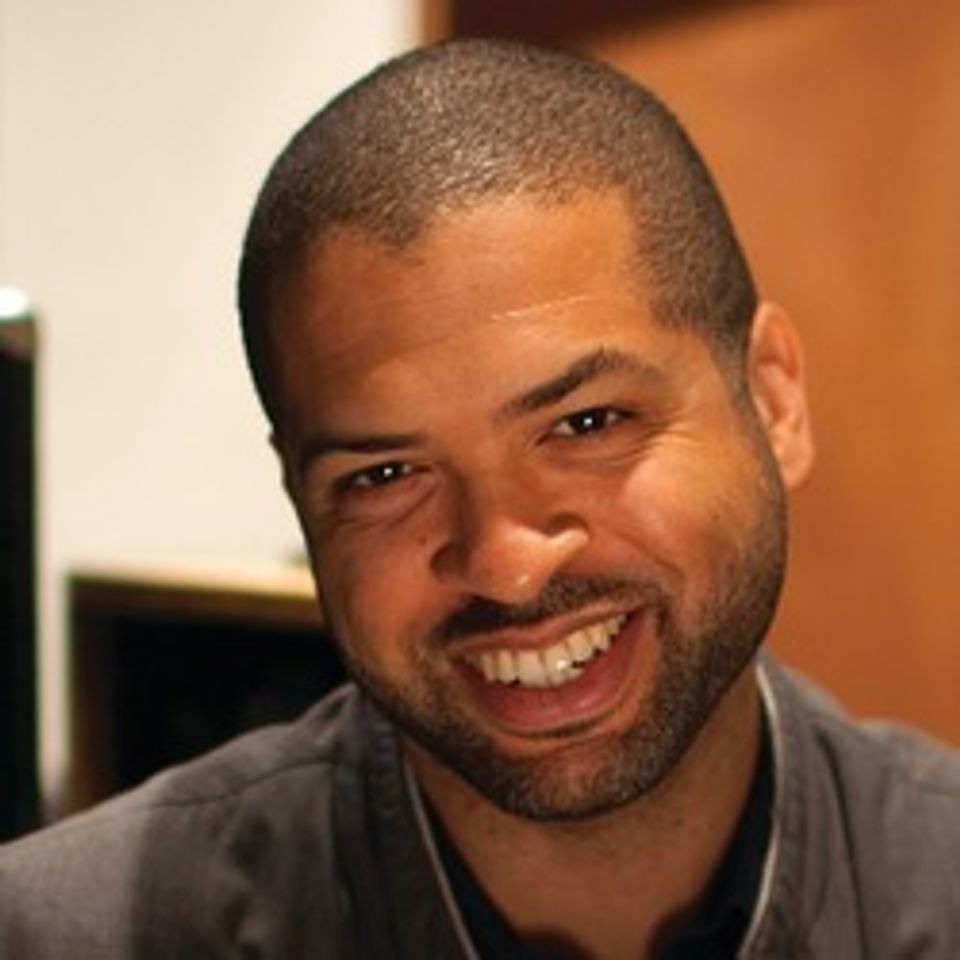 The US jazz pianist and composer Jason Moran is no stranger to the art world, having previously worked with artists including Theaster Gates; he is also on the roster of Luhring Augustine gallery in New York.

The starting point for Moran’s project at the Biennale was a consideration of jazz’s relationship to its audience and its links to expressions of freedom. “Work songs are part of the US culture, particularly that of African-Americans, whether it’s work in the field, people washing up or makeshift choirs in prisons,” he says.

In particular, he will explore recordings of songs sung in the Louisiana State Penitentiary, which is also known as Angola. The tempo of the inmates’ pieces, ranging from 57 to 190 beats a minute, becomes “hugely important”, Moran says. “It relates not only to the instrument of the human voice, but also to the tools being used by the worker: the hammer being lifted, the gravity pulling it down and the rhythm that is subsequently set by these movements.” 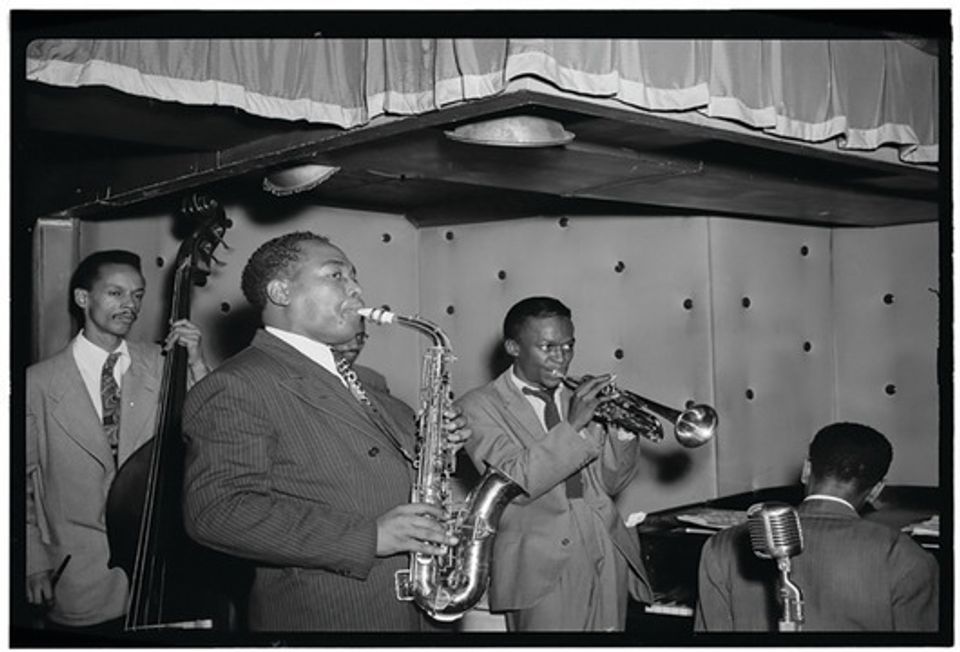 Two famous, and now closed, 1930s and 1940s jazz venues will also be recreated to act as the platform for events throughout the Biennale, including a performance by Moran’s band. 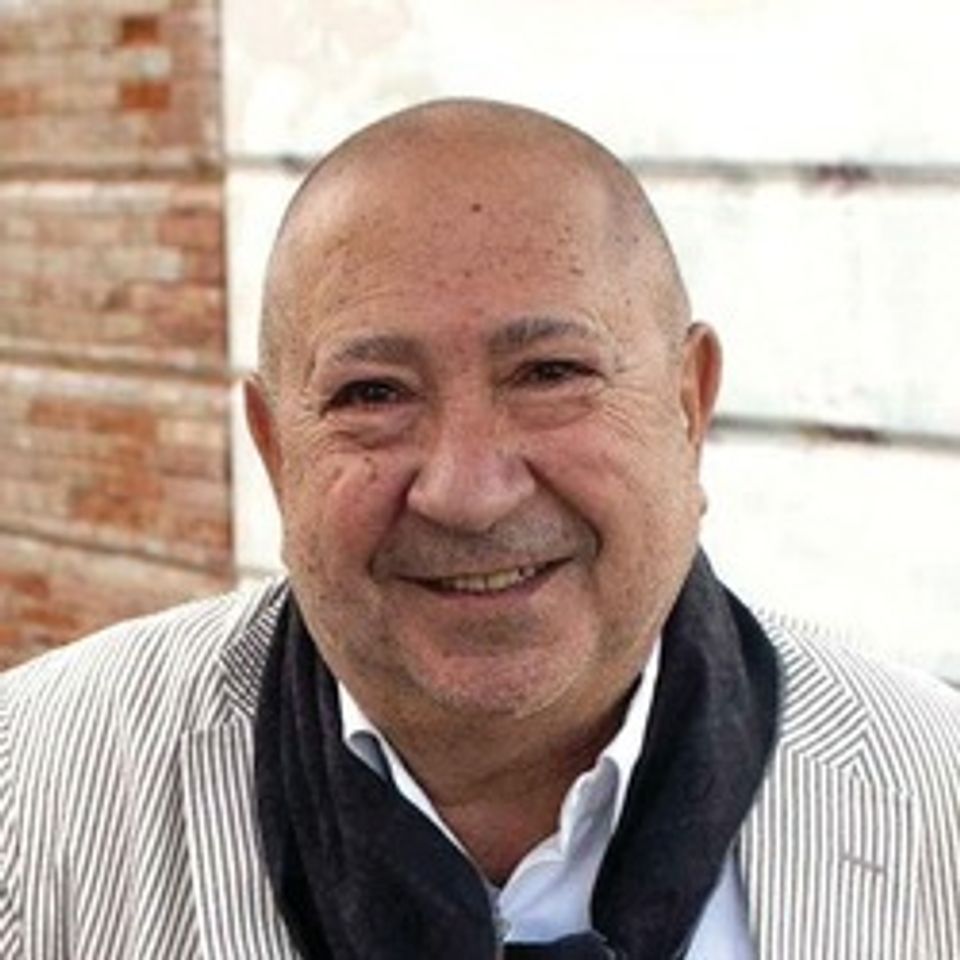 The starting point for the French artist Christian Boltanski’s work for the Biennale is in a Chilean desert, 60km from San Pedro de Atacama. Last October, three hundred Japanese bells were hung on metal rods of varying heights (between 1m and 2m), with the layout guided by the constellation of stars that would have occurred on the artist’s date of birth in 1944.

The elements play a major role in the work: sounds are produced by the wind and, although the life of the installation is essentially infinite, extreme conditions could affect it. “The piece is permanent if the desert doesn’t distort it,” Boltanski tells The Art Newspaper.

Although the sounds of the installation remain largely unheard in the vast landscape, a live screening of the work took place at the Museo Nacional de Bellas Artes (National Museum of Fine Arts) in Santiago, Chile, last year, when the tinkling of the bells came to the fore. At the Biennale, a 24-hour pre-recorded film of the installation will quietly resonate in the Arsenale. 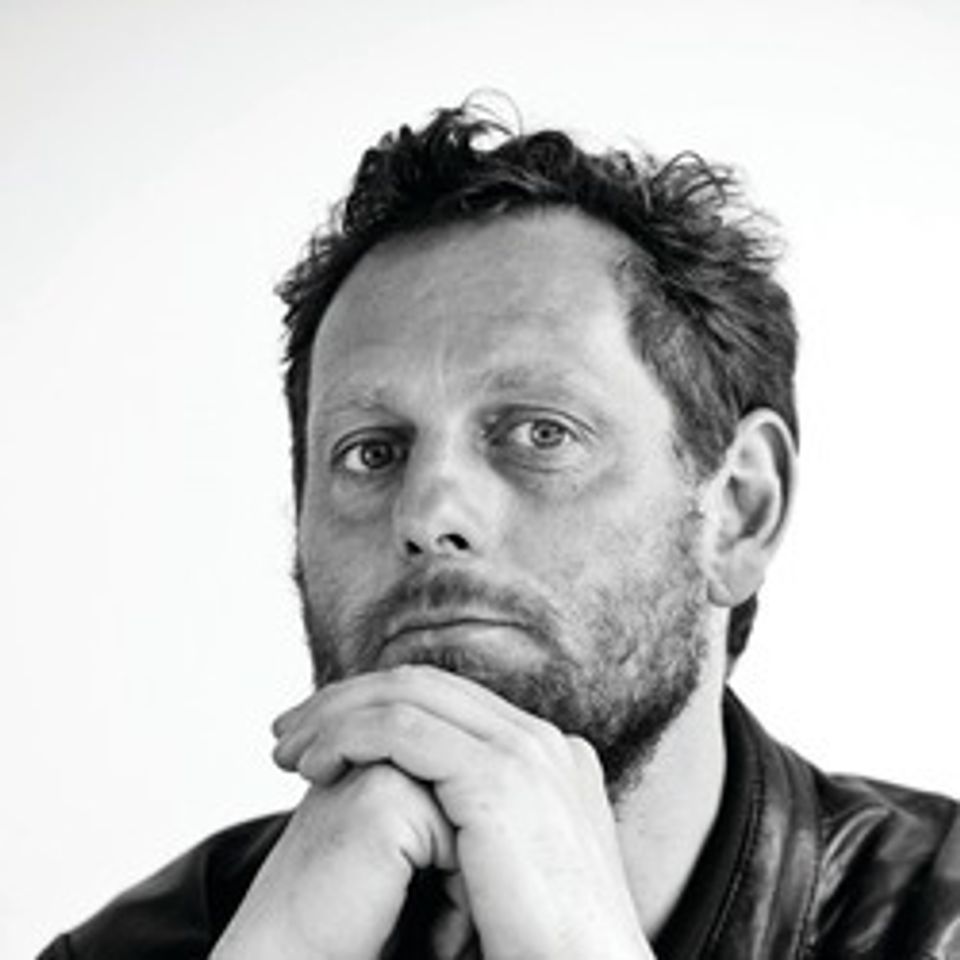 The core of the Arena’s programme, a live reading of three volumes of Karl Marx’s Das Kapital, has created an ideal context for Olaf Nicolai to develop his interest in the political work of the Italian composer Luigi Nono. The latter’s two-part composition “Un volto, e del mare/Non Consumiamo Marx” was a response to the 1968 Venice Biennale, which was marked by public protests against the event’s supposedly bourgeois values. The piece used recordings of the voices of those taking part in a march. 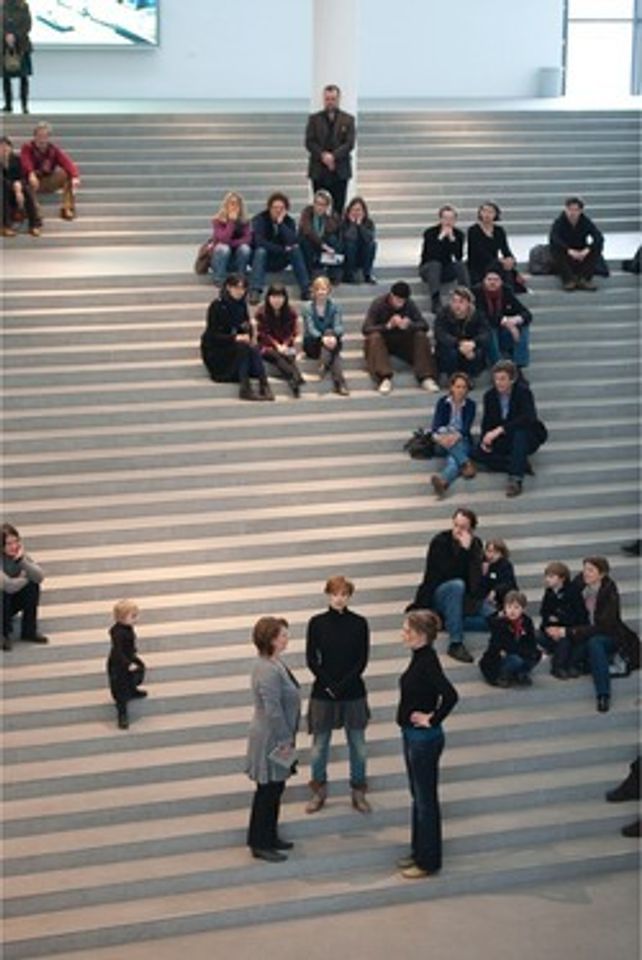 “My work is a new piece, but a dedication to [Nono], his presence in Venice and the idea of criticism within the context of music,” says Nicolai, who is working with a group of singers on an improvised performance for the Biennale’s opening. “Nono’s work was a reaction to an institution he saw as lazy and bourgeois. The fact that the same institution is now inviting [my] project raises the question as to whether everything is different now. That art is aware and reflects on such issues doesn’t necessarily mean the questions that were raised are answered.” After the performance, a network of singers will be established internationally, with their voices streamed digitally into the Central Pavilion.

This is not the German artist’s first foray into music. His year-long project Escalier du Chant (staircase of singing), 2011, at the Pinakothek der Moderne in Munich, provided a platform for 12 contemporary composers to create songs addressing political events. “I don’t make big distinctions between media, because all senses work together,” Nicolai says. “I think most people think that music is language without sense; I’m interested in it as sense without language.” 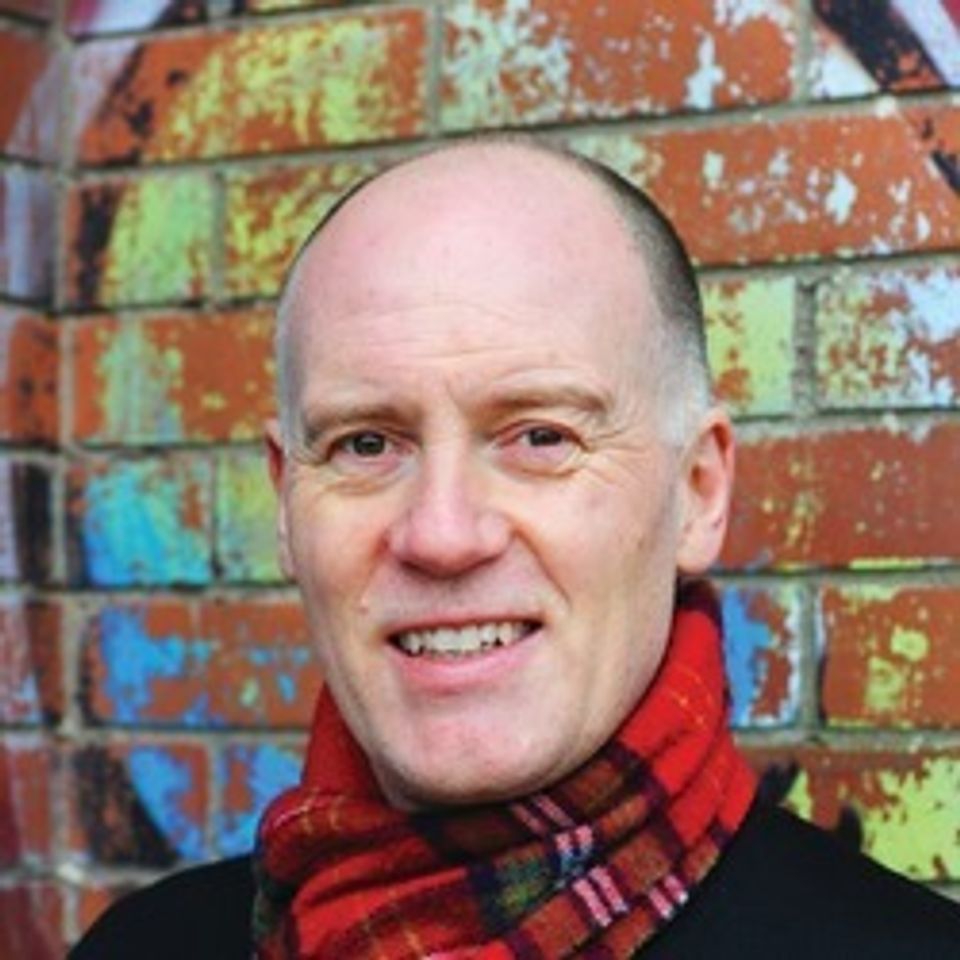 The Scottish pavilion also promises to be sonorous this year, thanks to a new body of work by the Glasgow-based artist Graham Fagen. In Palazzo Fontana, in the Cannaregio district, four rooms will be filled with sculptures and drawings, while a musically themed audio-visual installation in the final room will be audible throughout.

The project derives from the artist’s memories of learning the work of the Scottish poet (and national hero) Robert Burns at school. “At the same time, myself and my peers were catching the tail end of the punk and reggae movement,” Fagen says. “It stirred an idle curiosity in me, as to why these rhythms and myths of cultural heritage [in Burns] were the polar opposite of what was so meaningful to me and my peers.”

In 2000, Fagen started to research Burns, and learned about the poet’s planned passages to Jamaica. This revelation provided the conceptual link between the previously disparate musical entities in the artist’s life, but also prompted questions about why this reference to the history of the slave trade had been avoided when Fagen learned about Burns at school.

The installation he has made in response to these ideas takes the title of one of Burns’s poems, “The Slave’s Lament”, and brings together seemingly diverse musical traditions, with the support of the renowned composer Sally Beamish, the reggae singer Ghetto Priest, musicians from the Scottish Ensemble (a professional string orchestra) and the music producer Adrian Sherwood.

This is not the first time that Fagen and Ghetto Priest have reworked Burns’s poem; they collaborated on a version of it for Fagen’s exhibition at Glasgow’s Tramway gallery in 2005.