A mere semblance of political activity

Cynical commentators often point out that politically activist or socially-engaged art isn’t going to save the world. The position has become something of a truism, even among proponents of the genre. The question, these days, is just what can art achieve?

The artist Pedro Reyes has consistently taken a sunny approach to such problems. In the past, he has turned decommissioned guns into musical instruments and has organised events offering different kinds of free therapy. The literature accompanying his latest exhibition, The People’s United Nations (pUN) at the Hammer Museum in Los Angeles, repeatedly notes his “optimism”.

The Mexico City-based Reyes is very skilled at what Hollywood calls “art direction.” The exhibition of his graphic insignia, slogans, videos and sculptures is colour-coordinated against United Nations-blue walls, with a matching exhibition guide-cum-poster expanding on each artefact. The weekend event, which took place 2-3 May, brought together delegates from as many of the U.N.’s 195 member states as could be mustered in order to test out unconventional approaches to tackling major geopolitical issues. The organisers and stewards wore blue outfits and berets and a large flag designed by Reyes hung in the museum courtyard. A professional film crew was on hand to document the event to its best advantage.

The assembly is precisely the kind of event we might expect of the Hammer’s Public Engagement department, which is admired as one of the most active in the field. It was multi-cultural, participatory, interactive, politically progressive and inclusive of people who may not have been regular museum visitors. It ticked a lot of boxes.

But what did it actually hope to achieve? What were its methods? When I arrived on Saturday morning, the delegates—all of whom had voluntarily sacrificed their weekends—had just completed their “Hamsa Warm-Up” (a combination of physical exercises and mindfulness techniques) and were sitting in groups, working on headlines for the “pUN Times.” Reyes asked each of them to think of a shameful fact about their country, and then to devise a newspaper headline announcing the “wildest yet most plausible positive solution to this problem.” The example he offered, a headline invented during the First General Assembly, which was hosted by the Queens Museum in New York in 2013, concerned Turkey, where huge numbers of journalists are held in prisons. “Turkish Prison Times Sweeps the Pulitzers” was the waggish idea. 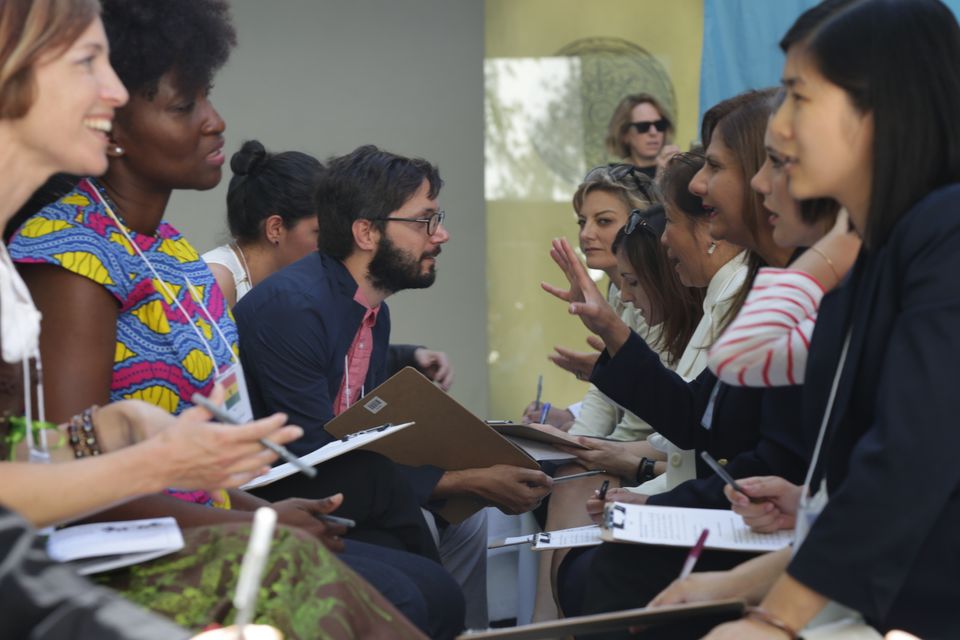 Before a lunch of “Grasswhoppers” (ecologically sustainable burgers made from grasshoppers) the delegates joined in a “Blessing of the Bees,” a secular grace in which they praised the “good and ancient spirits of the prairies. ” In the afternoon, the research scientist Douglas MacMartin lectured on geo-engineering and the various ways in which humans may be able to reverse global warming. (Good news: there are things that can be done. Bad news: all of them are dangerous, slow, short-term or prohibitively expensive.) Delegates voted on which avenue we should pursue. Throughout the weekend, a relationships counsellor was available to work through longstanding national conflicts between delegates. Upstairs in the gallery, a video played footage from a 2013 edition of this “Foreign Affairs Therapy.” The interactions tread a fine line between genuine grievance and a winking pantomime for the benefit of the camera.

This ambiguity touches on my deepest reservation about Reyes’s project. I can accept that, despite the light-heartedness of many of his approaches to geo-political problem solving, there may be some value in showing citizens that they have agency in major problems and that they are not necessarily as alienated as they may feel. One can even see a symbolic critique of standard political procedures in Reyes’s utopian, unencumbered global roundtable.

What is most objectionable, however, is the sense that the entire event was being performed for the cameras, or—more worrisome still—for an audience of people concerned only with the semblance of political activity happening under the auspices of a museum. In the gallery, where three monitors looped footage from the First General Assembly, it was obvious what the real outcome of all this time and energy would be: videos in a future exhibition lending a sheen of relational interactivity to a show of otherwise ironic, tokenistic faux-propaganda.

Perhaps Reyes’ most well-known works are his kinetic sculptures made from parts of decommissioned firearms, which can be programmed to make automatic music. The impressive Disarm Clock (2013), made from pistols, gun barrels and magazines is installed in the gallery in front of a stunningly obvious diagram of opposing forces titled Force Field Analysis (2013). A guide informed me that, to her knowledge, Disarm Clock had never functioned during this exhibition. It seemed like a fitting metaphor for the entire project’s failure to amount to anything more than a set of fanciful propositions that have no stake in actually working.