A ‘snapshot in time’: how US museum directors viewed their world before the pandemic

In a sign of how drastically things would change, fewer than half prioritised online offerings in a wide-ranging survey 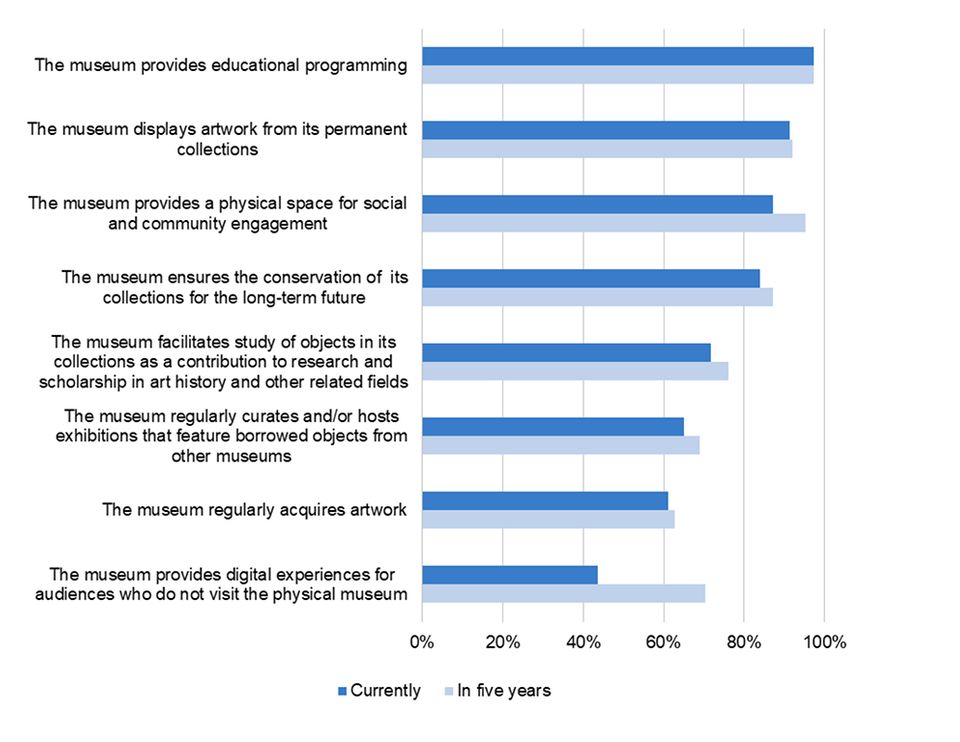 A survey of US and Canadian museum directors conducted as the coronavirus pandemic was getting under way in February and March suggests that some had little inkling of the shattering changes in store for them, according to results released today. Fewer than 50% considered providing remote digital experiences to be a high priority, and most anticipated hiring more museum educators, who have since been a serious casualty of budget squeezes related to Covid-19.

The invitation to take part in the survey was sent to 303 museum directors on 25 February by the nonprofit firm research firm Ithaka S+R at the behest of the Association of Art Museum Directors (AAMD) and Alliance of American Museums (AAM). It stopped fielding responses on 30 March, by which time 50% of the directors had responded and it became clear that museums were facing a crisis and needed to focus their efforts elsewhere.

Museums began closing en masse in mid-March in response to the Covid-19 pandemic and soon began plowing their energies into creating new virtual experiences for online visitors. Those offerings continued after museums began reopening over the summer at sharply diminished capacity. The results were also fielded before nationwide protests against racial injustice prompted museums across the country to publicly affirm their commitment to equity and diversity.

“I think it’s important just to stress that this was pre-pandemic,” says Christine Anagnos, the executive director of the AAMD, of the survey. “The world has changed on so many levels since that moment.”

She adds, “What happened to George Floyd has caused seismic shifts in the work that museums have been doing and need to continue to do.” She was referring to Floyd’s death at the hands of the Minneapolis police in May, which set off the widespread protests.

More than 50% of directors agreed that equity, diversity and inclusion strategies were priorities at their museums, Ithaka S+R reported. Yet only 10% of them judged that area of competency to be core to their own jobs, suggesting that “art museum directors support EDI initiatives in the abstract but do not view these efforts as a central part of their own work”, the firm’s report said.

Among the qualifications judged most valuable to their jobs, fundraising skills ranked first among the directors, followed by communication skills and the ability to manage change.

Strikingly, 91% of the directors surveyed were white. Directors of colour check-marked the ability to foster equity, diversity, inclusion, and accessibility as core to their work at a higher rate than white respondents (24% versus 8%).

The top “highly important” museum objectives for directors were providing educational programming (97%), displaying works from the permanent collection (91%) and providing a physical space for social and community engagement (87%).

Fewer than 50% of directors considered online experiences to be a current priority for their institutions. “I don’t mean to laugh, but that has changed,” says Anagnos, noting that the persistent threat of a second, third or fourth wave of coronavirus cases threatens museums’ efforts to reopen or stay open. “You’re only seeing an increase in that level of [digital] engagement, and it’s not going to go away.”

Around 70% did project that online experiences for visitors would be a priority in five years.

Directors indicated that the primary barriers to executing strategy in their museums were a lack of financial resources (74%) and insufficient employee skills (39%). The financial challenge has only ballooned since last spring’s closures, as museums struggled to survive without income from admissions, retail sales and event rentals and now can welcome far fewer visitors.

Salary costs remained the biggest expense for museums, making up 48% of their operating budgets on average, followed by exhibitions (16%); facilities maintenance, security and utilities (10%); education (9%) and collections care and management (8%).

In a sign of how much has changed, none of the museum directors said last winter that they planned to reduce their education staffs, and 58% said they planned to hire more staff members in that field. But museum educators, many of whom are part-time or freelancers on contract, were often among the first to lose their livelihoods as art institutions closed last spring–perhaps most notably as the Museum of Modern Art in New York terminated contracts. “Museums are in a very difficult position on that front right now,” Anagnos observes. 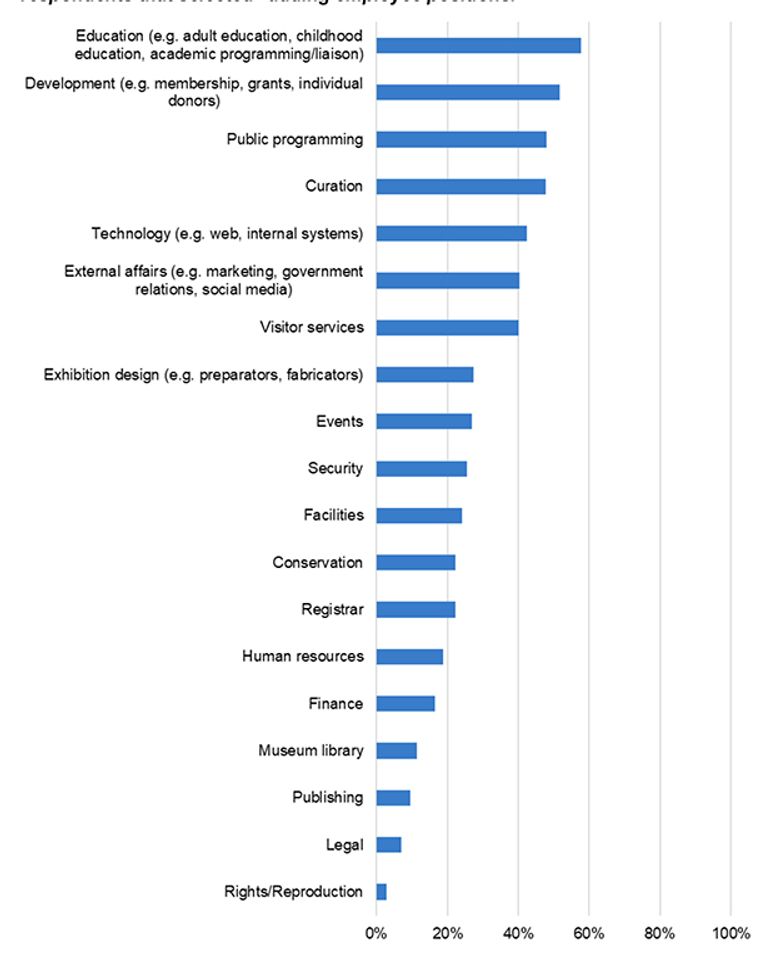 Responses from museum directors to the question “To the best of your knowledge, will your museum add or reduce employee positions in any of the following areas over the next five years?” Percentage of respondents that selected “adding employee positions” Ithaka S+R Art Museum Director Survey 2020 by Liam Sweeney and Jennifer K. Frederick

The survey also touches on deaccessioning, a source of simmering controversy since the AAMD decided in April to loosen rules that previously limited museums to using proceeds from collection sales exclusively to buy more art. Directors were asked what percentage of their collections was no longer aligned with their missions or curatorial priorities to the extent that the museum was unlikely ever to exhibit them publicly, which would make them ripe for sale. The response on average was 11%.

Museum directors also signalled that diversifying their collections was a crucial aspect of their acquisition strategies. Asked what factors influenced those strategies, a striking 77% said that the artist's demographic identity (African-American, female, LGBT) was most important. Pressure to diversify collections has only gained momentum amid campaigns for equity by current and former museum employees at scattered museums around the country. “That’s a great figure that stands out,” Anagnos says.

Responses by museum directors to the question “When making decisions about which artwork to acquire at your museum, which of the following do you prioritise? Select all that apply.” Percentage of respondents that selected each item Ithaka S+R Art Museum Director Survey 2020 by Liam Sweeney and Jennifer K. Frederick

Nonetheless, she emphasises that the survey overall must be viewed merely as “a snapshot in time”, before museums awakened to the severe financial challenges they will face for many years to come.

“It would be nice to see where we are a year from now,” she says. “But right now, everyone’s just trying to figure it out.”