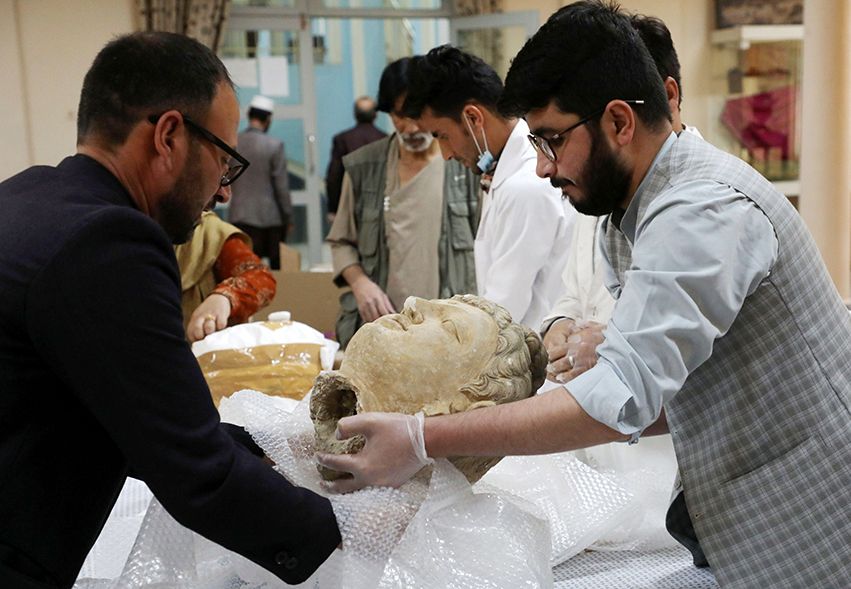 Museum workers unpack an artefact that was smuggled to the US during the wars and was only just returned to the Afghan National Museum in Kabul, Afghanistan, on 29 April 2021 © Reuters / Alamy Stock Photo

International heritage and culture organisations operating within Afghanistan are nervously monitoring the situation in the wake of the Taliban’s dramatic return to power. The British Council, for instance, says that all of its heritage projects in Afghanistan have been suspended and its office in Kabul has closed. Larger questions also remain about the status of the country’s priceless ancient heritage, museums and artefacts; at the time of writing, The Art Newspaper understands that the holdings of the National Museum of Afghanistan are safe.

In the past ten days, Taliban fighters have swept across Afghanistan, taking control of their first provincial capital on 6 August, then seizing Kabul on 15 August. As the insurgents closed in, President Ashraf Ghani flew out of the country. Seven people reportedly died at Kabul airport in the chaos as a US military jet took off.

A spokesperson for the British Council said that the safety of its current and former colleagues is its utmost concern. “For safety and security reasons, we are unable to comment further about the future status of our programmes and partnerships in Afghanistan at this time,” she adds. The British Council has three ten-month projects currently running in the country; these include restoring around 30 paintings in the Afghan National Collection overseen by the Foundation for Culture & Civil Society, which was awarded £502,015 by the British Council.

The Geneva-based International Alliance for the Protection of Heritage in Conflict Areas (Aliph) says it is “too early to provide a comment” but is closely following the difficult situation. The private charity Turquoise Mountain—which has helped transform Murad Khani in Kabul’s Old City, where more than 1,350 locals are being trained in traditional craft methods to help restore their city—declined to comment. It has launched a crowdfunding campaign focused on providing emergency food supplies, which has so far raised more than £143,000.

Such international initiatives helped strengthen the country’s archaeological and architectural inventory, says Bastien Varoutsikos, the director of development at Iconem which specialises in the digitisation of endangered heritage sites. “We’re all waiting to see what the general position is going to be. Cultural heritage sites, practices, all will need support but at what cost? It’s an equation we’ll all have to solve before deciding what comes next,” he adds. 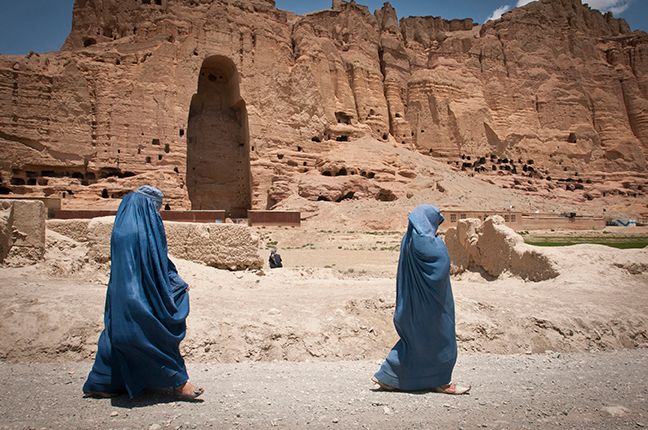 The huge cavity where one of the ancient Buddhas of Bamiyan used to stand. The monumental statues were built in 507 and 554 AD, and were the largest statues of standing Buddha on Earth until the Taliban dynamited them in 2001

Experts working in the region have also highlighted that cultural heritage could once again face threats of targeted destruction. In 2001, the Taliban destroyed part of the sixth-century Buddhas carved into a cliff in Bamyan valley, central Afghanistan. “From a political standpoint, it’s unclear if the Taliban will engage in destructions of high value heritage landmarks considering the new narrative they’re attempting to build,” Varoutsikos says. Unesco meanwhile says it is worried about the deteriorating situation in Afghanistan and says all parties should take care of relics in danger of looting or destruction.

The last time Kabul was under the control of the Taliban 20 years ago, Afghanistan lost an estimated half of its cultural heritage. Sharia law practiced by the Taliban forces forbids the depiction of icons, human bodies and other deities, which in the past has resulted in the systematic erasure of minorities and women, who are now required to be chaperoned by male guardians and don the veil.

The American Institute of Afghanistan Studies, a non-profit organisation based in Massachusetts, is monitoring and reporting on heritage sites at risk on its twitter feed, highlighting recently that the ancient citadel at Herat in the east, which was renovated by the Aga Khan Trust for Culture, had reportedly been occupied by Taliban militants.

2/3 Herat's imposing #citadel, Qalʿa-yi Ikhtiyar al-Din, was renovated by the Aga Khan Trust for Culture. It is reportedly occupied by Taliban militants pic.twitter.com/Gv6AxLBas4

Earlier this year, Omar Sharifi, the head of the institute, was among the panellists at a discussion that was part of the Paul Mellon lecture organised by the World Monuments Fund. Sharifi said at the time: “There are many elements in the Taliban [who] know that by destroying some of these things [cultural sites], they know can connect to a larger community of jihadists. They want to erase a part of our history that puts us in the 20th century… there are certain elements within Taliban who might be able to understand the tremendous changes of the last 28 years.”

A statement released on 15 August by Kabul’s National Museum of Afghanistan said the Taliban’s sweeping takeover of the country has already brought looting. “Unfortunately, today Kabul city has witnessed unprecedented chaos; using the opportunity looters and smugglers in different parts of Kabul have looted private and public properties. However, the museum staff, artefacts, and goods are safe yet, but continuation of this chaotic situation causes a huge concern about the safety of museum’s artefacts and goods,” the museum said.

The International Council of Museums (Icom) points out that the National Museum "issued a statement informing of the very real possibility of facing looters, so we are trying to bring attention to the ICOM Red List on Afghan Antiquities at Risk of illicit traffic and the artefacts it describes. Between 2007 and 2009 it helped British custom officers identify and send back to the National Museum 1,500 objects."

The National Museum of Afghanistan is now urging security forces, the international community, the Taliban, and other influential parties to pay attention to the safety and security of objects, “do not let opportunists use this situation as cause for deterioration and the smuggling of objects and goods out of this institution.”

“There have been some discussions over the past few weeks to move collections to other countries but it’s unclear if any of this has happened. There is a currently a vacuum at the institutional level which makes it difficult to plan for anything or even know exactly what is going on,” Varoutsikos says.

The Taliban said in a statement last February that it intends to “robustly protect, monitor and preserve” relics in the country, despite the fact it has a long and brutal track record of doing the opposite.

UPDATE (26 August): Regarding the British Council project focused on 30 paintings in the Afghan National Collection overseen by the Foundation for Culture & Civil Society—a partner in the British Council/Cultural Protection Fund project at the national gallery in Kabul from 2018-2021 tells us that this project was actually completed some time ago, and is not active.