With only two lots unsold, the auction house nets $362.6m in evening of avid bidding 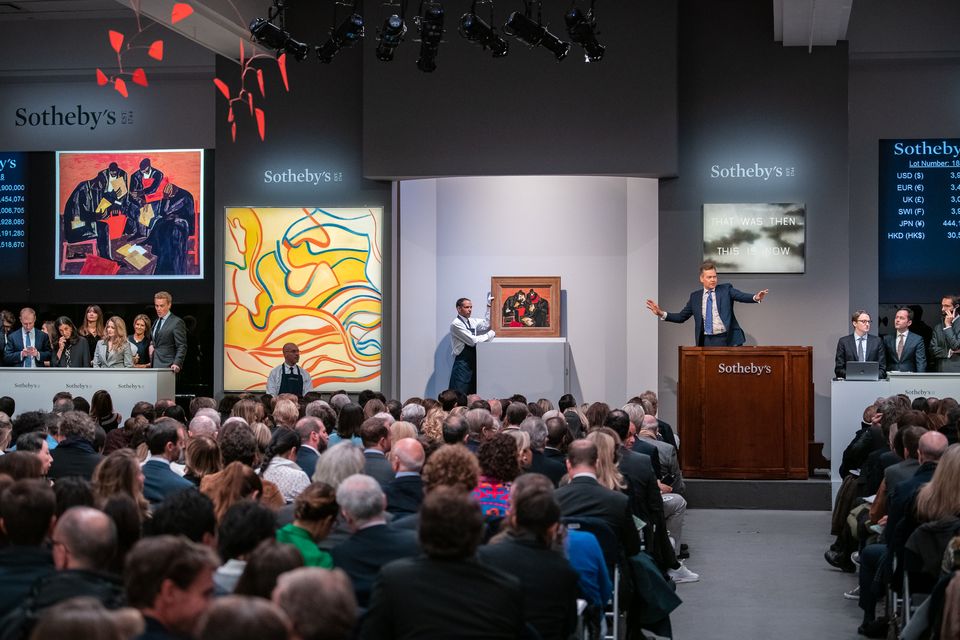 Jacob Lawrence's The Businessmen (1947) prompted a long bidding war before selling for a record $6.16m (with fees) Sotheby's

At its contemporary art evening sale in New York last night, 14 November, Sotheby’s rebounded after a patchy Impressionist and Modern sale earlier in the week when several top lots went unsold. Boasting a 97% sell-through rate and a total of $362.6m (with fees)—squarely in the middle of its $278.4m-$375.9m pre-sale estimate—the sale yielded several unexpectedly strong prices for artists who have been relative market underdogs until now. Of the night's four records, all were achieved by women or artists of colour.

Thirty-five of the 65 lots were guaranteed, but the sale was largely bolstered by consistent and considered bidding, not just on the phones but also in the room. It made for a long night, but also kept buyers on their toes. “I haven't seen a sale with that much activity in ages, both in the room and on the phones—but especially in the room,” says Morgan Long, the head of art investment at the Fine Art Group. “We’ve gotten used to auctions which play out almost exclusively on the phones while the audience just sits there. This was much more exciting than usual, despite no huge trophy sales!”

The auctioneer, Sotheby's European chairman Oliver Barker, said after the sale that he too was surprised by the depth of bidding from European, American and Asian clients.

The first lot quickly made a new auction record for the US artist Dana Schutz—her vivid painting, Her Arms (2003), opened the sale with a speedy bidding volley between around nine bidders. It passed its high estimate of $200,000 in under a minute and sold for $650,000 ($795,000 with fees). To boot, it was the first of 11 lots from the continued David Tieger collection sale, all of which sold, raking in $48.5m (with fees). 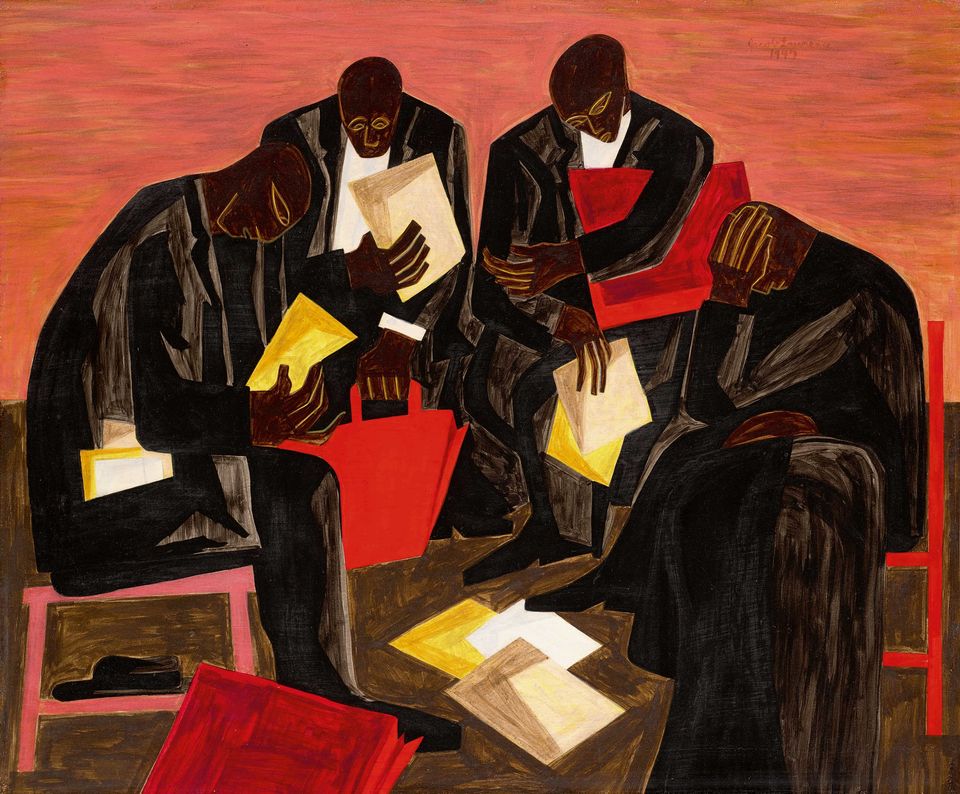 African American artists swept the sale, furthering a welcome market shift that was felt in earnest during New York's spring sales when Kerry James Marshall's Past Times sold at Sotheby's for a seismic $21m in May. A quartet of works by Jean-Michel Basquiat, all offered with guarantees and from a private European collection, fetched prices within their estimate range or just over, suggesting they were well priced. Taken together, they brought in $41.1m. Ancient Mentor I (1985), a pixelated grid of pressed paint by Jack Whitten, who died earlier this year, hammered for $1.85m ($2.2m with fees), which more than doubled his previous auction record of $855,000. Henry Taylor’s I’ll Put a Spell on You (2004) also prompted spirited bids, and brought in $800,000 ($975,000 with fees), quadrupling its high estimate of $200,000 and setting a world record for the artist.

“It's great to see undervalued and underappreciated artists really hit the international scene,” Morgan Long says, adding that the trend may well continue through the rest of the week’s sales as a painting by Sam Gilliam is offered at Christie's tonight while Phillips brings two strong Kerry James Marshall works. 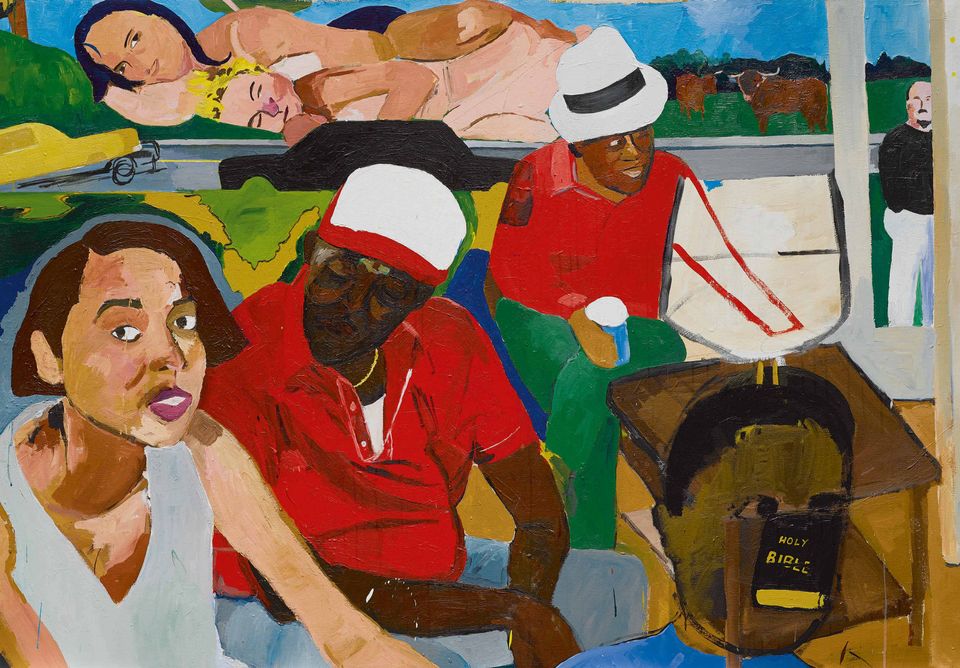 It was Jacob Lawrence’s The Businessmen (1947) that stole the evening’s spotlight, though. Plodding bidding among several buyers in the room and on the phones drove the price to $5.2m ($6.16m with fees), tripling its high estimate of $2m.

“It is an exceptional, rare painting by a foundational Modernist and it fit well in the context of the sale, particularly in light of the big price for Taylor's painting,” says Wendy Cromwell, an independent contemporary art specialist based in New York. The demand for Lawrence is no accident, she says: “The sale had a well-curated selection of offerings that gave context to Lawrence's painting.”

The Businessmen is part of a series of ten paintings that Lawrence made shortly after completing his iconic Migration Series as part of a commission by Fortune magazine to capture post-war African American life. Depicting five black men in dark suits stooped over on stools and frustratedly scouring documents, the painting used to hang in the formal sitting room known as the Green Room of the White House during the George W. Bush administration. 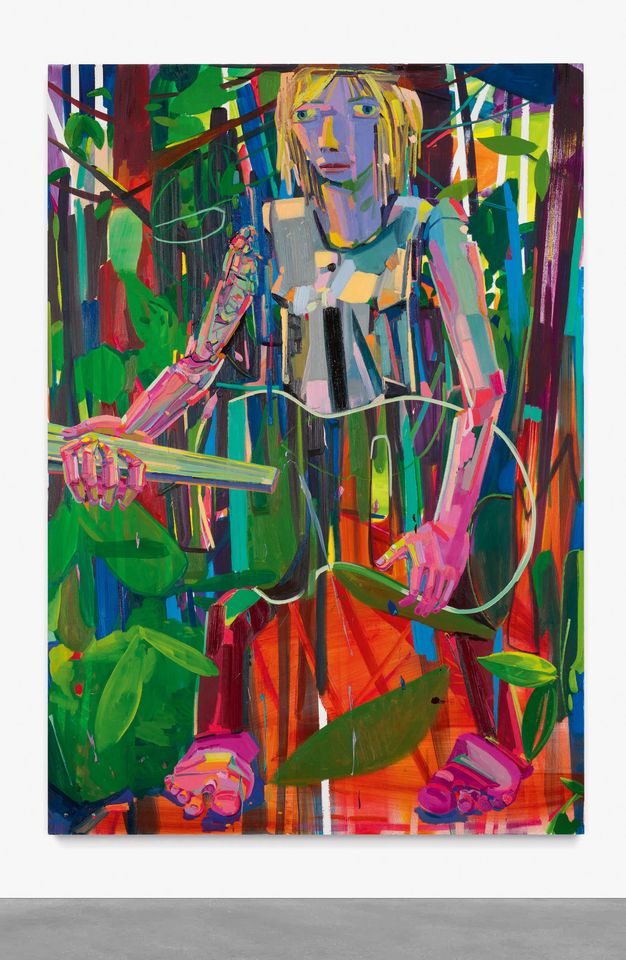 The night was not without a few disappointments, however, chief among them the sale of two works by Georgia O’Keeffe that were deaccessioned by New Mexico’s Georgia O’Keeffe Museum. Both Calla Lillies on Red and A Street failed to meet their low estimates, though still selling for a combined $20m (with fees). Neither were guaranteed. The decision to place the works in the contemporary sale rather than the Impressionist and modern sale may have had something to do with the lack of bidding traction. “It was an experiment,” says Grégoire Billault, the head of the contemporary art department at Sotheby’s, adding that they are strong works regardless of which sale they are placed in, “which is what attracts buyers”.

Though the works carried museum provenance, Long says she believes the O'Keeffes offered at Christie's—one in the contemporary evening sale and one in the American pictures sale—are stronger. “Sotheby’s estimates were just a bit steep, so they had to slightly adjust down,” she says. Interestingly, the same buyer bought both.

Only two works failed to sell throughout the course of the night: Kenneth Noland’s Flutter, estimated between $2m-$3m, and Susan Rothenberg’s Diagonal, which had a low estimate of $1.2m. “Overall it was a healthy sale,” Cromwell says, adding that collectors are responding to a wider cultural imperative to consider art more broadly, "and Sotheby’s responded to that demand”.