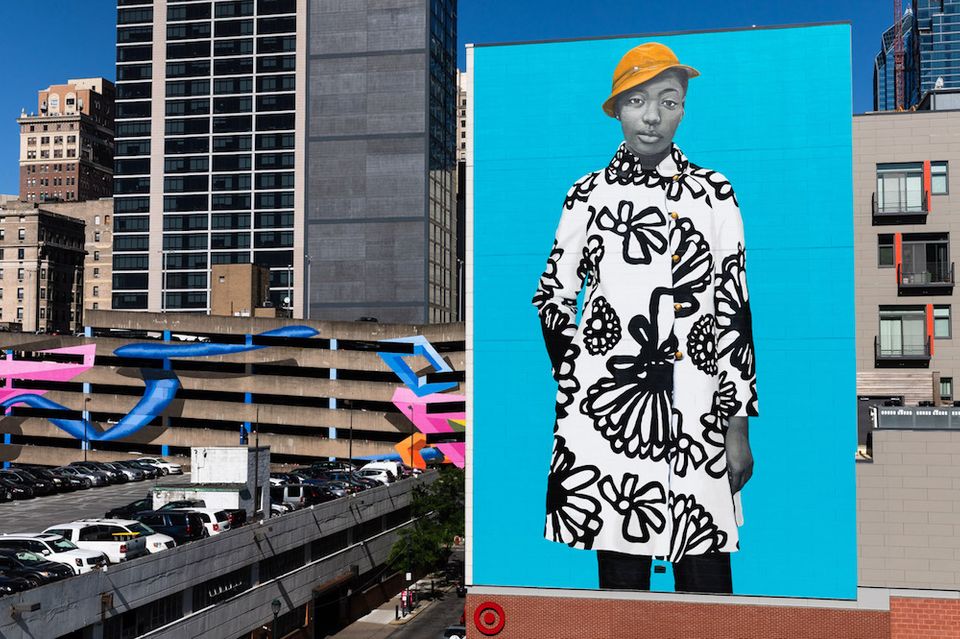 The artist Amy Sherald, whose portrait of former First Lady Michelle Obama is drawing the crowds at the National Portrait Gallery in Washington DC, has adorned the side of a Target store in Philadelphia with a huge mural depicting a local resident, 19-year-old African American Najee Spencer-Young. At the recent inauguration of the Untitled piece, Sherald said that “given Philadelphia’s cultural landscape, I think it’s important to also have that diversity represented within its visual landscape”.

The six-storey mural was commissioned by the non-profit Mural Arts Philadelphia. Spencer-Young, a participant in its education programme, met Sherald earlier this year at her studio in Jersey City. “Spencer-Young is standing in her own aura of class and self-assurance in a black-and-white graphic print trench and mustard cloche expertly tilted to the side,” writes the journalist Elizabeth Wellington in The Philadelphia Inquirer newspaper.

“When I met Najee, she was very quiet and sitting with her head down pretending not to pay attention,” Sherald told the same newspaper. “When I asked for volunteers to shoot a few fun photos, [Spencer-Young] popped up and we started trying on different outfits. After looking at the photos we took, I immediately knew she was the right model for this mural. I saw it as an opportunity to build her self-esteem as well as [that of] the other young girls that look like her.”

Like the First Lady’s portrait, Sherald’s mural challenges ideas about identity and the public gaze, say Mural Arts Philadelphia in a statement. “Who is allowed to be comfortable in public spaces? Who is represented in art? How can one woman’s portrait begin to shift that experience for others?” it says.

The permanent piece was funded by the Florida-based Forrest & Frances Lattner Foundation and the Hummingbird Foundation in London.