After stint in the doldrums, India Art Fair shows signs of picking up

The India Art Fair has struggled in recent years as international A-list contemporary galleries have dropped away, citing everything from bureaucratic import hurdles, to a crippling lack of wifi derailing follow-up efforts on potential sales. But participating galleries say that the quality of the fair has improved this year and that leading curators and patron groups from the Museum of Modern Art in New York, the Art Institute of Chicago, the San Francisco Museum of Asian Art, have all been in attendance.

The organisers repositioned the fair as a 'tier two' event this year with a strong focus on South Asia, but aiming for a more original regional feel. It remains a trade and social fixture in the Indian art calendar, pulling in galleries from Kolkata and Mumbai, accompanied by a string of openings at Delhi's leading public and private galleries.

The number of galleries has been reduced by around 15 to 70 this year, and Delhi's traffic gridlock and continuing connectivity issues complicates the business of fair-going.

But a redesign has given the event itself an airy, navigable feel, and there was an upbeat buzz among the leading galleries that have stayed loyal to the event that has attracted more than 100,000 visitors in the past. The car manufacturer BMW is the fair's presenting partner, while Sandy Angus, who founded Art Hong Kong and ArtInternational Istanbul, is its co-owner.

The veteran gallerist Shireen Gandhy of Chemould Prescott Road, from Mumbai, says that while Indian galleries might be few among many at larger art fairs such as Frieze or Basel, the Delhi fair is a showcase for Indian art to visiting Western institutions.  "I do think the fair serves a purpose for visibility even internationally," she says, reporting strong interest in a six-figure work by Atul Dodiya, one of India's pre-eminent artists from Mumbai.

Several stands looking back to earlier art in India—from “company” paintings, to modern versions of traditional Pichwai paintings depicting the god Krishna in various moods, to the photographs of Indian Modernist architect Habib Rahman— give a context to more contemporary work.

The South Asian strand brought exhibitions and artists from Pakistan, Sri Lanka and saw a first-time outing for one of Nepal's most significant art galleries, the Nepal Arts Council, at any international fair, with several politically powerful pieces. "In the arts, the whole of the sub continent is so linked," said the India Art Fair's international director Zain Masud. "We don't need to see the same blue-chip galleries in India that you see all over the world."

By the end of the fair's first day, the leading Indian gallery Galleryske had reported significant sales of works by David Alesworth, Sudarshan Shetty and the British-Indian artist Bharti Kher. Shetty is due to organise India's Kochi-Muziris Biennale this year and an exhibition of his work at Delhi’s National Gallery of Modern Art has been getting strong reviews.

Kiran Nadar, one of the most prominent collectors in India, whose pioneering private gallery occupies a large space in a Delhi shopping mall—until she finds suitable land and an architect for a new gallery—singled out a six-sculpture group by Krishna Reddy, an older work by an artist born in Andhra Pradesh in 1925 who is better-known as a print maker. But the collector, who smilingly admits her reputation as a trophy hunter, declined to say what she had bought at the fair.

The Chinese collector Lu Xun was one of 17 people, he said, who had pursued a “brilliant work” at Galleryske by Prabhavathi Meppayil, a Bangalore artist who has emerged from relative obscurity to widening recognition at the Venice Biennale and subsequently the Kochi Biennale.  Her minimalist works are made in gesso with heated copper wires layered on to the surface until they almost disappear.

Sanjay Lalbhai, the chairman of the textile manufacturer Arvind Limited, a collector widely thought to be founding a private museum in Ahmedabad, in Gujarat, bought several works from Experimenter, the award-winning young Mumbai Gallery, including a piece by Julien Segard.

The Vadehra Art Gallery reported significant interest in a large painting by the veteran artist Gulam Mohammed Sheikh, which sold for a six-figure sum. A shining brass bike bring bunches of bananas by Subodh Gupta, dubbed India's Damien Hirst and whose giant steel pot and pan structures adorn both private and public galleries here, was on sale at the leading gallery Nature Morte. 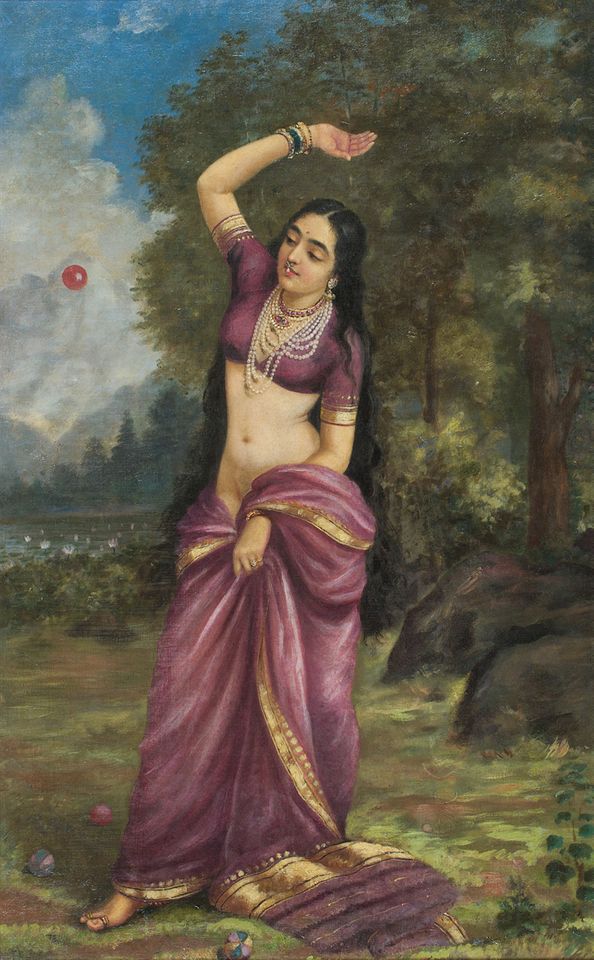 The most expensive work at the fair is not for sale. Amrita Sher-Gil’s Dressing The Bride at the Delhi Art Gallery is priced at $5m. Works by the artist, who trained in France the 1930s, have fared well at recent auctions. Mohini Playing with a Ball, by the early 20th-century master Raja Ravi Varma, is on sale for $1.5 million, as well as a 78 ft Bengali scroll.

"The Indian market is still very tiny and we are hoping to be on the cusp that is going to explode, but we have been waiting for that for a long time now," says Kishore Singh of the Delhi Art Gallery, which is showing hundreds of paintings in two large spaces in what is billed as a survey of Indian Modern art. "The focus now on South Asia makes a lot of sense." He estimates that there are around 200 collectors of Modern art and a handful of serious collectors in India—some put the number to around ten.