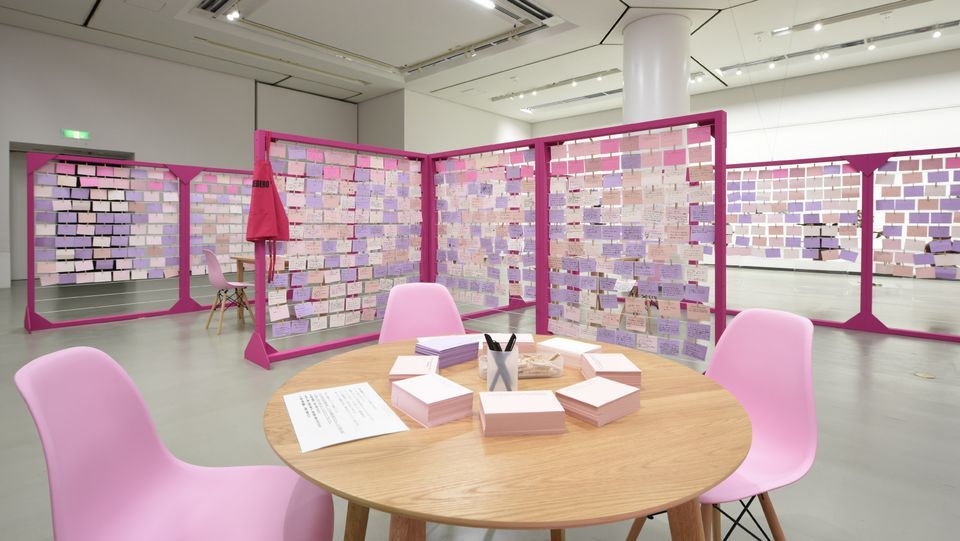 Mónica Mayer's The Clothesline (2019) at the Aichi Triennale, before the artist modified the work Photo: Ito Tetsuo

A controversial exhibition at the Aichi Triennale dedicated to freedom of speech, which closed only three days after opening, has reopened but only for visitors who apply via a lottery. The Triennale, entitled Taming Y/Our Passion, opened on 1 August and runs until 14 October.

The After 'Freedom of Expression?' section was shut down when organisers were threatened with violence after showing a statue by the Korean sculptors Kim Seo-kyung and Kim Eun-sung, entitled Statue of a Girl of Peace (2011). The work represents a “comfort woman” or ianfu, the term for Korean women forced to work in Japanese brothels during the Second World War. Other works that had been censored in international museums were also included.

The organisers of the triennale tell The Art Newspaper that visitors wanting to see the reopened show had to apply via a selective lottery system. From 8 to 11 October, groups of up to 35 people were chosen to view the exhibition with viewing times lasting 40 minutes or an hour. Visitors were required to sign statements promising not to post photographs of the works on social media.

Crucially, the mayor of Nagoya (Aichi’s prefectural capital), Takashi Kawamura, stoked the row, saying that “[the comfort woman sculpture] tramples on Japanese people’s feelings”. He wrote to the governor of the Aichi prefecture and the head of the triennial organising committee, Hideaki Omura, requesting that the sculpture be removed.

Late August, fourteen artists—including Tania Bruguera, Mónica Mayer, Candice Breitz and Javier Téllez—withdrew or modified their work in protest; they have since agreed to put their exhibits back on display.

Breitz is showing the video installation Love Story (2016); she says on Facebook that “this can hardly be registered as a massive victory, especially since it was only possible to re-open the Triennale to a tiny handful of visitors (who had to apply to visit via a lottery) under draconian security conditions. As a result of the controversy, the Triennale remains in danger of losing its governmental funding. Nevertheless, every small victory is worth marking.”