In a wide-ranging interview, Maamoun Abdulkarim discussed the realities of illegal trafficking, restoration efforts in Palmyra and his concerns over destruction in Aleppo 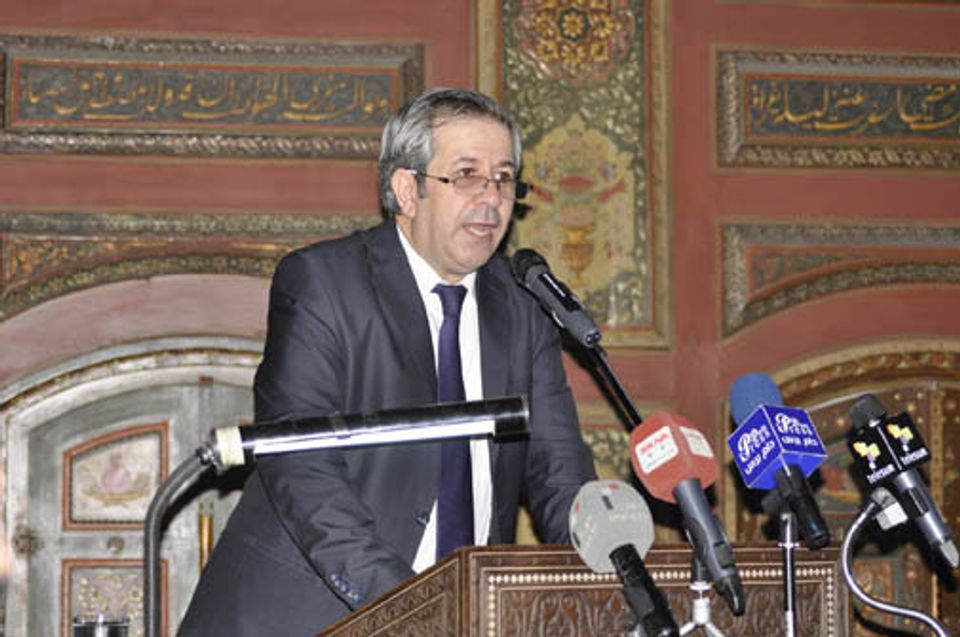 Close to three-quarters of the artefacts seized in anti-smuggling operations in Syria and neighbouring Lebanon this year have proved to be fakes, Syria’s antiquities chief Maamoun Abdulkarim tells The Art Newspaper. Speaking ahead of his visit to Edinburgh’s International Cultural Summit this week, the director general for antiquities and museums also gives a relatively optimistic view of restoration work in Palmyra, and shares his pressing concerns over the devastating crisis in Aleppo.

There have been growing questions over the extent of illicit digging and antiquities trafficking in Syria by militant groups including Isis. Abdulkarim says that while 7,000 objects have been seized by authorities in Syria since 2013, the proportion of fakes has risen from 30% to closer to 70%, both inside the country and in neighbouring Lebanon.

Objects seized by police in Damascus include 30 fake ancient Bibles, as well as Korans. Another haul was 450 gold Medieval coins, all discovered to be fake, along with scores of fake mosaic tableaus and statues. Some items were poorly made fakes that were quickly weeded out, but sometimes it was difficult to distinguish between the real artefacts and the copies. “I hope the originals are stopped and the fakes go to the market place,” Abdulkarim says.

From Lebanon, 89 big objects including 20 Palmyran statues, 18 mosaics, and Roman capitals and architectural pieces, were returned to Damascus in 2014 after they were examined by a Syrian delegation, he says. Lebanon is the only country that has worked with Syria during this time to investigate suspected looted objects, he adds, while Turkey and Jordan have refused any contact. “I don’t ask that they return all objects to Syria, because I know there will be a negative response,” Abdulkarim says, but he appealed to those countries to publically report what they had seized, and provide figures and details to Unesco and Interpol.

Turning to recovery efforts in Palmyra, Abdulkarim says that almost all of the ancient city’s artefacts have been secured since it was recaptured from Isil’s control in March, and most of the stones from damaged structures are reusable. "I can confirm that more than 90% of the collection in Palmyra is safe; 10% is damaged.” He says: “We didn’t lose Palmyra’s art.”

“We need about five years to finish our work,” Abdulkarim adds. Emergency repairs in Palmyra are now focussed on two temples blown up by Isil—the Temple of Baalshamin and most of the Temple of Bel—and the Triumphal Arch. In terms of artefacts, 38 gold coins from the Islamic, Byzantine and Roman periods were lost in the rushed evacuation. But the unique Zenobia Antonius bronze coin, bearing the image of the third-century Palmyrene Queen, was removed to Damascus and is safe.

There are some 400 to 500 statues and tens of thousands of lesser objects now in Damascus awaiting restoration, Abdulkarim says. Three truckloads were evacuated just before Isil occupied Palmyra in June 2015 and many more pieces have been moved since. These include the 15-tonne remnants of the second-century Lion of al-Lat statue, which was blown up by the extremist group. While Isil beheaded many of the statues that could not be moved, “the majority were in a good situation,” Abdulkarim says, with heads left lying at the site. 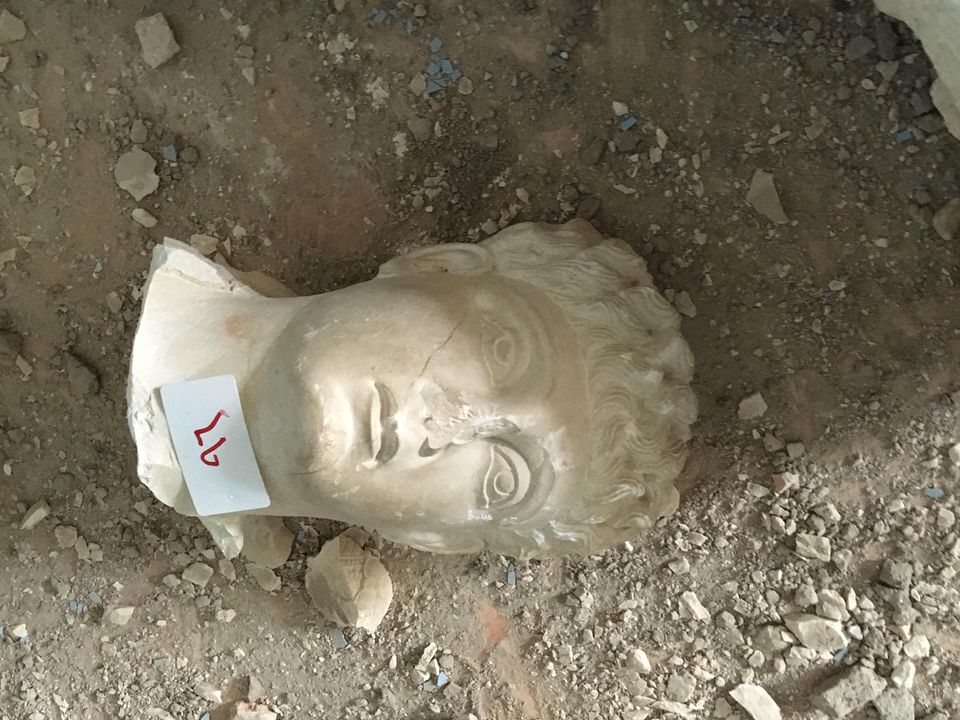 Artefacts in the Palmyra Museum after the liberation from Isil, images taken by Maamoun Abdulkarim on his mobile phone

Three Polish archaeologists have joined conservation and training efforts in Palmyra, while two broken pieces are to travel to Rome for an exhibition in October, to be repaired and returned by Italian experts as a symbol of solidarity. While Russian teams were among the first into Palmyra, Abdulkarim stressed that the historic ties in the field were widely with the West and appealed for archaeologists to rally to Syria.

Abdulkarim’s main concern now is Aleppo, Syria’s largest city before the civil war, which has suffered through continued fighting and is currently split between opposing forces. Thousands of civilians, including children, have been killed during the conflict, and more than 150 historic structures have been damaged, along with the city’s famous souk and hundreds of traditional houses—a destruction Abdulkarim compared to that of Warsaw by the Nazis in 1944. 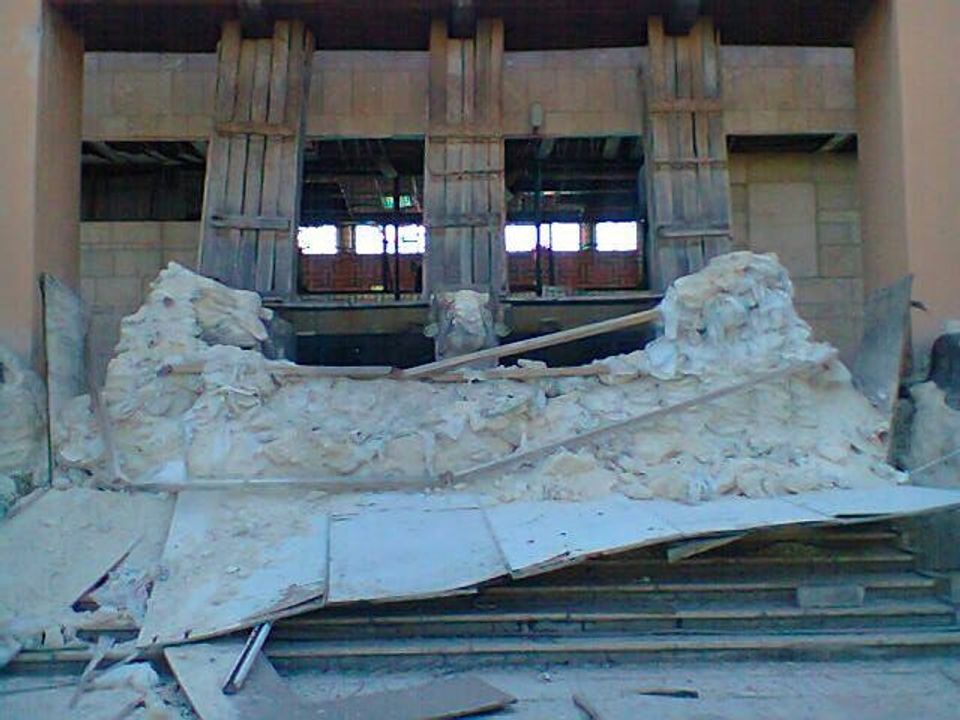 The National Museum of Aleppo was severely damaged by mortar attacks this summer. Photo: DGAM

After recent mortar attacks at the National Museum of Aleppo, major pieces located outside the building that are too big to move have been sandbagged. In the event of any end to the fighting, Abdulkarim says he would expect to reach out to Germany’s international cooperation agency GIZ and the Aga Khan Foundation, which both have extensive archives and plans of historic Aleppo, to help with the reconstruction.

Abdulkarim’s goal of working to set politics aside and preserve a shared heritage has been well received by the international community. “I refuse to use our cultural interest for political agendas. It’s our common heritage, it’s our common identity,” Abdulkarim tells us. “The politics will change, but the heritage won’t change.”