America is easier to see, but the whole picture remains elusive: Alexander Alberro on the Whitney’s opening exhibition

When Gertrude Vanderbilt Whitney founded the Whitney Studio Club (as the Whitney Museum of American Art was then called) in Greenwich Village in 1918, it was meant to be a meeting place and hangout for its artist-members. But in 1930, after the Metropolitan Museum of Art spurned her proposed gift of more than 500 works by artists in her milieu (she even offered an endowment), she charged her club with a greater task: exhibiting and collecting American art that was hard to see.

Practically from the beginning, space was an issue, especially when it came to the museum’s mandate to feature its permanent collection. The Brutalist edifice built by the Bauhaus-trained architect Marcel Breuer on Madison Avenue in 1966 had just over 30,000 sq. ft of space for a museum with around 1,600 works in its collection. That was three times more room than the 54th Street home the museum had previously occupied since 1954 (and upon which the Museum of Modern Art presently stands).

Yet the collection grew exponentially. By 2010, it had around 20,000 objects, and Breuer’s “inverted ziggurat”, as it was often called, also became claustrophobic. Plans were drawn up in recent years to expand his grey granite and concrete structure, but in the end, the museum board and trustees decided it would be best to commission a larger building. 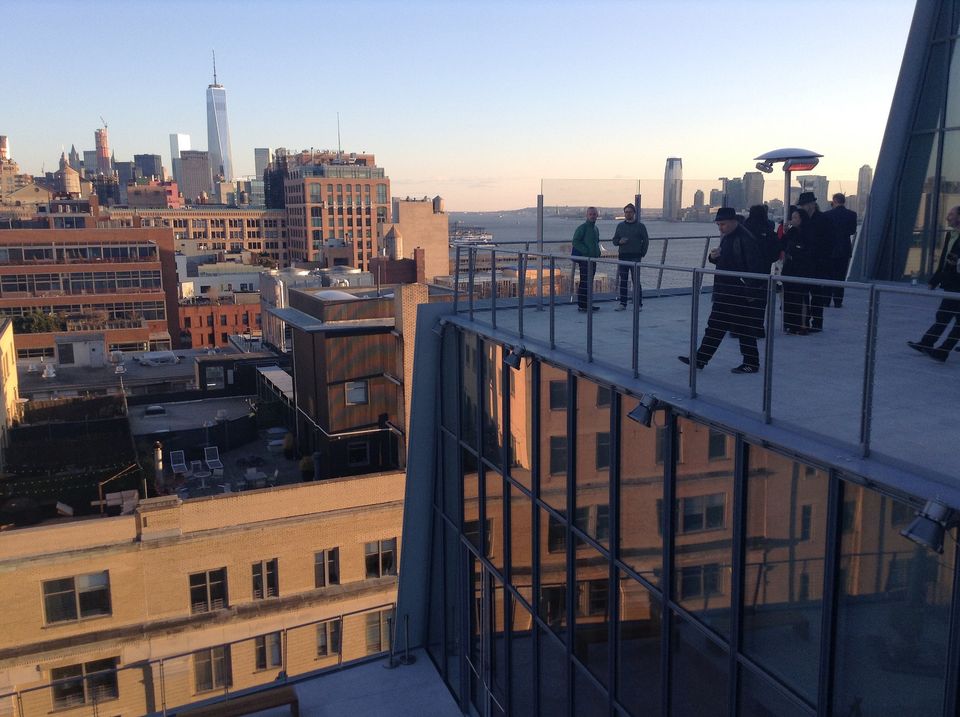 A view from one of the balconies at the new Whitney Museum of American Art. Photo: Trebor Scholz

Not so hard to see anymore America is Hard to See, the Whitney’s inaugural exhibition in its new home, which opens on 1 May, certainly does not refer to the vistas offered by the institution’s new building in Manhattan’s Meatpacking District. From the moment one enters through the dramatically cantilevered gateway along Gansevoort Street, which the Italian architect Renzo Piano designed as a large, sheltered public space alongside the foot of the High Line park, sweeping perspectives open up. The views become more sensational the further up one goes. On the west side of the building, large windows open sight-lines onto the mighty Hudson River and beyond; on the east side, four open-air terraces look over the city’s bustling streets and spectacular skyline. The panoramas of the river, the park and the façades of industrial structures will make the new Whitney Museum a must-visit location for all sorts of site-seers.

The title of the inaugural exhibition refers to questions long debated at the museum about who can properly be considered an American artist and what constitutes American art. The show, which was organised by Donna De Salvo, the museum’s savvy chief curator, together with Scott Rothkopf, Dana Miller and Carter Foster with Jane Panetta, Catherine Taft and Mia Curran, is touted as presenting “new perspectives” on the museum’s permanent collection. De Salvo and her team have thought long and hard about how that collection should be organised and displayed. In previous years, as during the directorship of Thomas Armstrong III, who led the museum between 1974 and 1990, the museum’s policy was that an American artist was someone who had a United States passport or who was a permanent, legal resident. By contrast, America is Hard to See includes work not only by US citizens, but also foreigners who spent some of their working life in the country.

This is a good start, but there are lingering issues. That America is comprised of more than one nation and that it spans two continents does not seem to have concerned the curators. This is especially odd given that the 1951 poem by Robert Frost from which the exhibition gets its title implied a much more geographically expansive view. More objects by female artists and minorities are included in the new show than at any time in the museum’s history, but there are only a couple Native American artists. Alas, we will probably have to wait for another generation to take up this broader, exceedingly overdue perspective. For now it is still mostly stars and stripes, and the US parochialism of the 20th century. 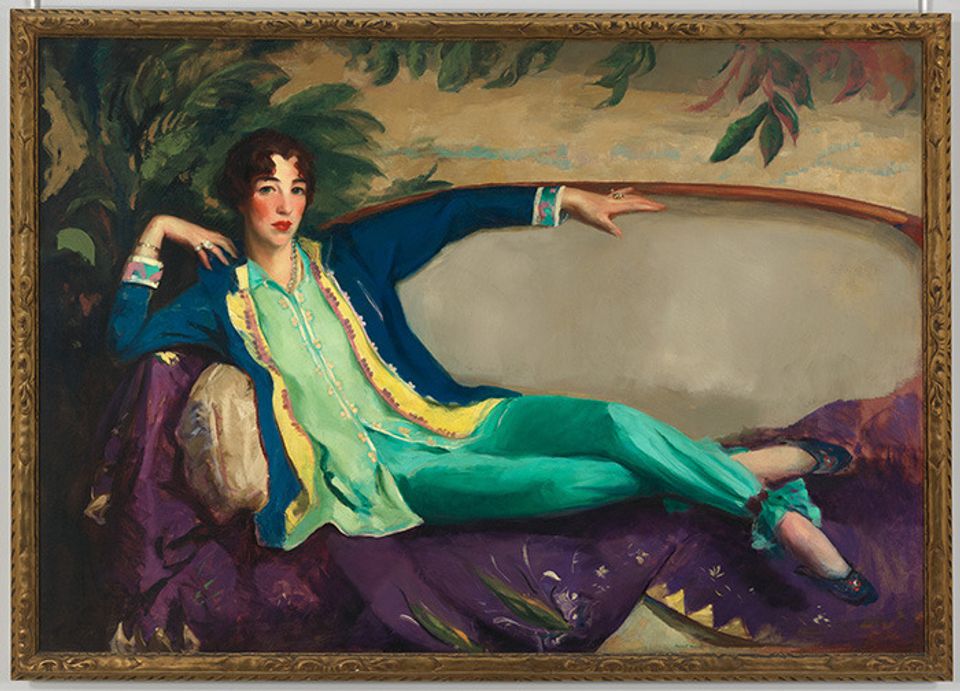 A multitude of themes The show is organised chronologically in 23 distinctly themed parts, each of which takes its name from a work within. Featuring more than 600 pieces by around 400 artists from the 20th and 21st centuries, the exhibition (the largest of its kind in the institution’s history) explores notions and convictions that have preoccupied artists working in the US since 1900. The museum’s strong holdings in painting and sculpture are displayed alongside plenty of collages, prints, photographs and time-based works, responding to the play of media that has long characterised Modernism. Relatively unknown works of art appear together with more familiar ones in a concerted effort to re-configure the canon. Around 150 of the works in the exhibition have not been exhibited for decades, and many are on view for the first time, such as David Smith’s Cubi XXI (1964), Faith Ringgold’s Women Free Angela (1971) and Jack Whitten’s Sorcerer’s Apprentice (1974).

Yet rather than a comprehensive survey of American art history, the show presents a number of distinct narratives. The first story begins in the lobby gallery, where the section “Eight West Eighth” reflects on the early history of the Whitney Studio Club. Just beyond a large portrait by Robert Henri of Mrs Whitney reclining on an antique settee in intimate apparel are a number of realist paintings of urban scenes by William Glackens, John Sloan and others in the group that later came to be known as the Ashcan School. Photographs by Charles Sheeler, Edward Steichen and Berenice Abbott depict the interiors and exhibitions at the Studio Club and watercolors by Guy Pène du Bois satirise the characters who frequented them. Thirteen drawings Edward Hopper made there, most of which have never before been shown, are also included.

The rest of the show works its way down from the museum’s eighth floor. “Forms Abstracted” captures the impact of the European avant-garde on early 20th-century American artists such as Marsden Hartley (his radiating painting opposite the elevator gives this section its name), while “Breaking the Prairie” on the seventh floor focuses on reactions to the American landscape by Thomas Hart Benton, Grant Wood and Georgia O’Keefe, among others.

The prosperous years of the 1920s are represented in “The Circus,” a segment titled after one of the museum’s true treasures: a festive miniature circus designed by Alexander Calder between 1926 and 1931. Two other sections, “Rose Castle” and “Free Radicals,” with work by artists like Joseph Cornell, Man Ray and films by Maya Deren and Mary Ellen Bute, do a great job at capturing the distinctive nature of US surrealism. 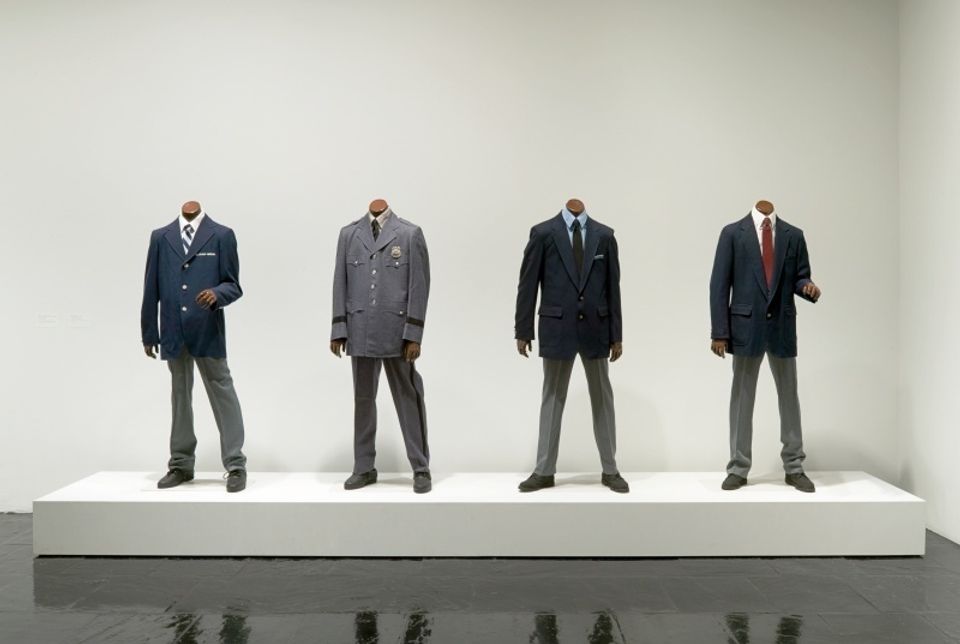 Catering to new audiences The curators also take into account the shifting interests of the museum public, which are broader than they have ever been, and socially-engaged art is foregrounded. “Fighting with All Our Might” includes work by Ben Shahn, Dorothea Lange and Jacob Lawrence that was made in the Great Depression and during the Great Migration of African Americans from the rural south to the urban north. The 1990s are represented in “Guarded View,” titled after Fred Wilson’s brilliant 1991 sculpture of four headless black mannequins, all dressed as museum guards, which speaks to a world often unseen by gallery visitors, but which structures their museum experience.

America is Hard to See also includes objects that address the barbarous side of US history, such as Harry Sternberg’s 1935 lithograph Southern Holiday, which depicts the bloody castration of a black body tied to a post in an industrial setting. Closer to our time, Howard Lester’s 1970 anti-war film One Week in Vietnam highlights US casualties of a single seven-day span during the war, while Richard Serra’s 2004 print Abu Ghraib presents a disturbing image of a hooded prisoner tortured in a US-established prison in Iraq. 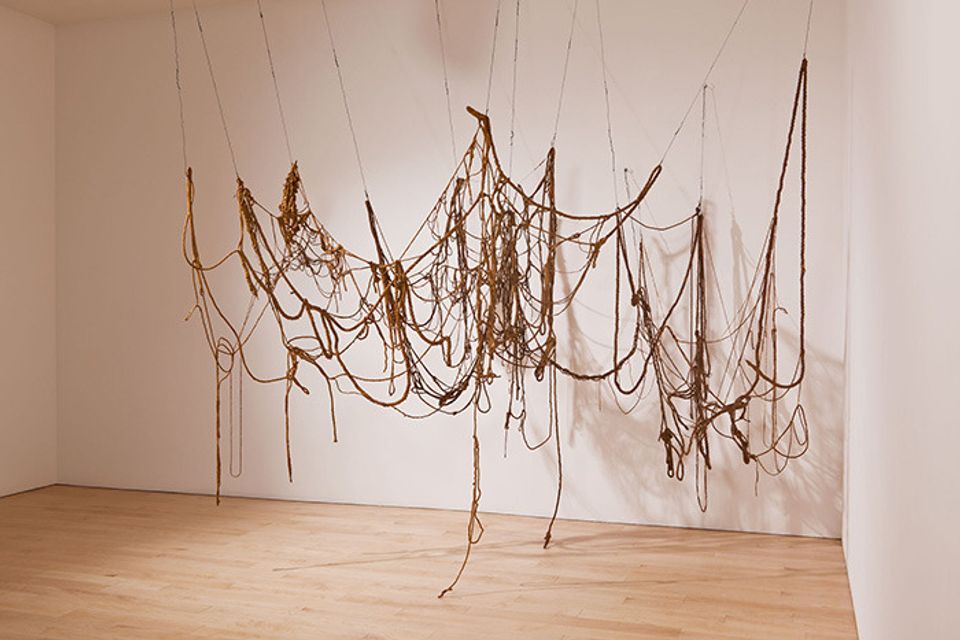 Lost context, lost significance The move to the new building is clearly good for the Whitney. Yet many key works of the late 1960s and 1970s don’t resonate nearly as well in Piano’s building as they did in the museum’s previous digs on Madison Avenue. Like much art of its time, the undeniable dignity and presence of Breuer’s elemental crudeness “grows on one slowly, like a taste for olives or warm beer,” as the architecture critic Ada Louise Huxtable commented in 1966. Indeed, Minimalism—a US art movement if there ever was one—grew up with Breuer’s building and looks at home in its galleries. Donald Judd’s systematically arranged objects, Carl Andre’s modular sculpture and Richard Serra’s early work with raw, unpolished materials, rhyme with the esoteric austerity of the old building’s Brutalist architecture, and the units that comprise Robert Smithson’s Alogon (1966) explicitly reference its inverted step pyramid façade.

These objects lose their initial significance in the museum’s new home, with its wide-open spaces and airy atmosphere. The same is true of pieces that were made to contest the fortress-like ruggedness of Breuer’s building, such as Eva Hesse’s Untitled (Rope Piece) (1970) or Barry Le Va’s Continuous and Related Activities: Discontinued by the Act of Dropping (1967). Then there is the problem of what to do with more explicitly site-specific pieces in the museum’s collection, such as Robert Irwin’s Scrim Veil—Black Rectangle—Natural Light (1977), Charles Simonds's Dwellings (1981), or Michael Asher’s Bucksbaum Award-winning 2010 project that kept the Whitney Biennial open continuously to the public for 24 hours a day. Breuer’s building is inseparable from much of the art that was shown in it, and vice versa.

The Whitney has leased the building on Madison Avenue to the Metropolitan Museum of Art for eight years. Let’s hope that after that, the Whitney can reclaim it to show parts of its collection there once again. If it doesn’t, future generations might find important chapters of American art hard to see.

Alexander Alberro is the Virginia Bloedel Wright Professor of Art History and Department Chair at Barnard College. He is currently at work on Abstraction in Reverse, a book about the emergence and development of abstract art in Latin America.