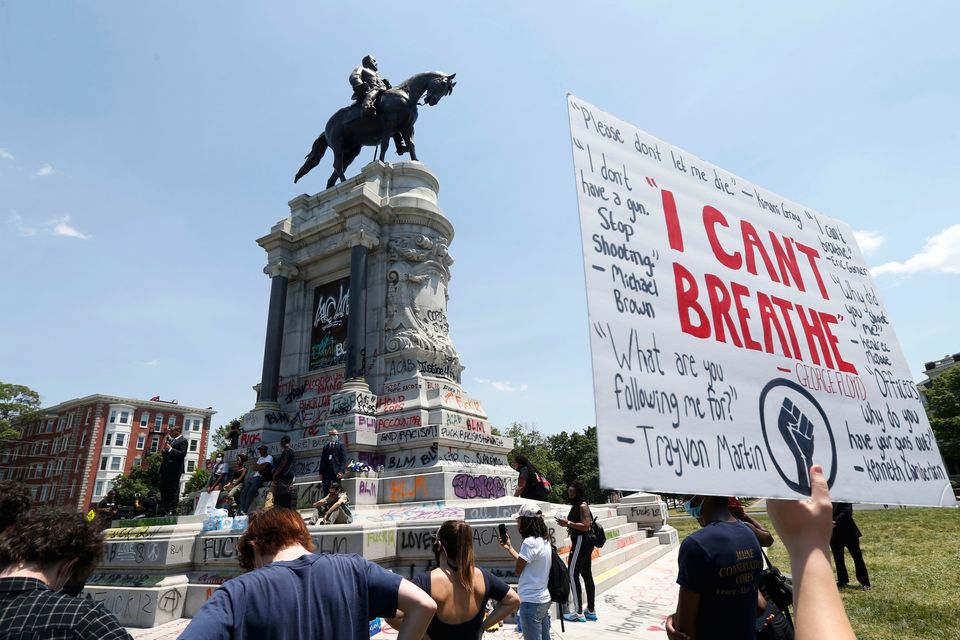 Virginia Lt. Gov. Justin Fairfax, left, speaks to protesters in front of the statue of Confederate General Robert E. Lee on Monument Avenue, in Richmond, Va. Fairfax supports the removal of the statue, which Gov. Ralph Northam said will be removed "as soon as possible" from Monument Avenue. Steve Helber/AP/Shutterstock

Since 1890, a bronze equestrian statue of the Confederate general Robert E. Lee has towered over Monument Avenue in Richmond, a two-mile avenue that holds a vast collection of Confederate memorials contested to valorise white supremacy.

After decades of debate, and as monuments to Confederate soldiers are vandalised across the US this week amid the Black Lives Matter protests in response to the murder of the African-American man George Floyd at the hands of the white police officer Derek Chauvin, the state of Virginia has announced that it will remove the towering monument, and will seek to remove several other Confederate monuments in Richmond.

The memorial to Lee comprises a 21 ft-tall statue that sits on a 40 ft-tall granite pedestal. During a press conference yesterday, the Virginia governor Ralph Northam said: “We put things on pedestals when we want people to look up. Think about the message that this sends to people coming from around the world to visit the capital city of one of the largest states in our country—or to young children.”

Another monument dedicated to Lee was at the centre of the violent Unite the Right rally in 2017 in Charlottesville, in which protestors calling for the removal of the statue clashed with white supremacists, leading to the death of one woman who was run over by a car.

“We no longer preach a false version of history—one that pretends the Civil War was about ‘state rights’ and not the evils of slavery. No one believes that anymore," Northam added. He says that the monument will be placed in storage and that his administration plans to consult with the community to determine their future.

The memorial to Lee has been heavily damaged during the recent protests, and is entirely graffitied with messages like “Black Lives Matter”, “KKK” and “How much more blood?” Protestors also projected a photograph of Floyd onto the statue this week with the words “No justice, no peace”.