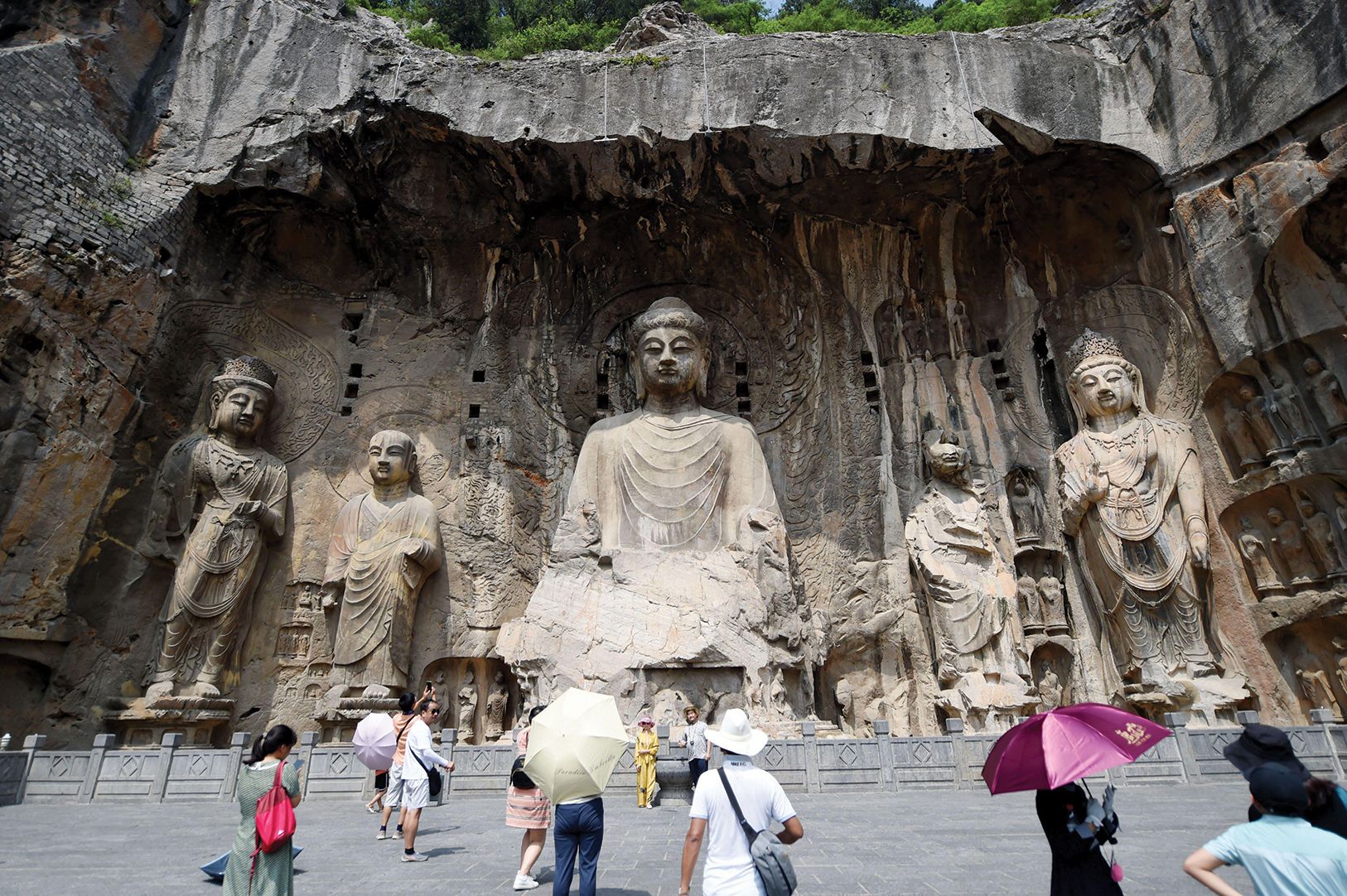 The 1,500-year-old Longmen Grottoes, a Unesco World Heritage site, are located beside a river that burst its banks Alvise Armellini/DPA/Alamy

China’s central province of Henan is known as the birthplace of Chinese civilisation, with five Unesco World Heritage sites and 420 national heritage sites. In July it was hit by record rainfall and severe floods, claiming the lives of more than 300 people and causing an estimated economic loss of Rmb114bn ($18bn). According to state media reports, at least 400 cultural relics units in the region suffered varying degrees of damage.

Henan’s northernmost city, Anyang, recorded its heaviest rainfall since records began 60 years ago, with up to 138mm an hour. The downpour submerged outdoor areas of the more than 3,000-year-old Unesco World Heritage site Yin Xu, the ancient capital of the late Shang dynasty (1300BC-1046BC), which testifies to the golden age of early Chinese culture, crafts and sciences. These included archaeological pits at Dasikong village and the remains of workshops at Huanbei that manufactured handicrafts such as pottery and oracle bones. Both sites are part of ongoing research by the Chinese Academy of Social Sciences (CASS).

“Rains from surrounding villages poured into the workshop relics” because they are located in low-lying farmlands, says CASS archaeologist He Yuling. “The floods reached a level of at least 50cm above the lands, submerging the whole excavation area.” The team was forced to suspend ongoing excavations to focus on the immediate drainage and maintenance of the site.

Alerted to further extreme rain, the archaeologists evacuated artefacts to a secure storage facility in Anyang, protected the digs with plastic sheets, rotated shifts to ensure 24-hour monitoring of the site and bought two new water pumps. They also benefited from canopies and drainage ditches set up in May as routine preventative measures against the summer rainy season.

The digs at Yin Xu have now resumed after a further shutdown caused by a Covid-19 outbreak in August. There was no flood damage to artefacts, He Yuling says, although it is difficult to assess the impact on the relics under excavation that could not be moved.

Worse than the potential destruction of ancient artefacts, “the saddest” consequence of such extreme weather events is the irreversible damage caused to the “cultural layers” of human activity recorded in the earth, says Yang Ningbo, a researcher at the Hunan Institute of Cultural Relics and Archaeology. 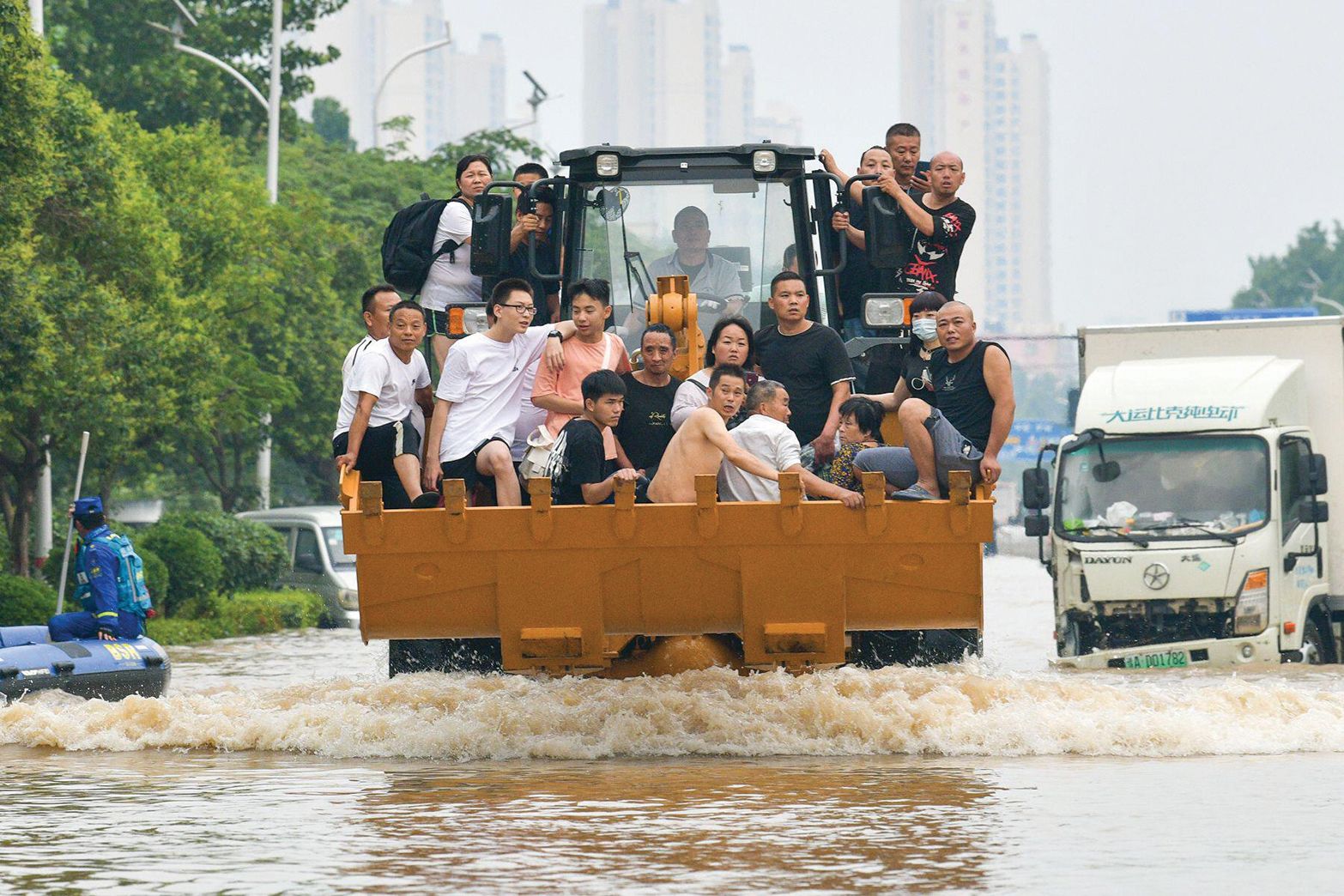 Residents of Zhengzhou, the capital of Henan province, were rescued from floods in July Sipa US /Alamy

Some 300km south-west of Yin Xu, the bursting river Yi surged through pavements, washing away 300m of guardrails at the Longmen Grottoes Unesco World Heritage site and causing partial collapses in the soil foundations of its 1,500-year-old Buddhist statues, according to local reports.

Located on either side of the river, the site comprises 2,300 caves and niches containing almost 110,000 statues and more than 60 stupas (shrines) carved into limestone cliffs. According to Unesco, it is the “largest and most impressive collection of Chinese art of the late Northern Wei and Tang dynasties (316-907)”.

Hundreds of people including volunteers helped the emergency effort to remove floodwater from the caverns, dredge up the railings and re-install them on the river bank. The Longmen Grottoes park reopened to visitors on 26 July before a temporary closure due to Covid-19; it reopened again on 30 August. Though custodians confirmed there was no damage to the stone carvings due to their elevated position and ancient drainage system, the strong water exposure contributes to long-term corrosion.

Other heritage sites affected by the Henan floods include the 2,200-year-old Han Ba King Cities in Xingyang and the archaeological park of the Zheng and Han States in Xinzheng, which dates to the Eastern Zhou dynasty (770BC-256BC).

The disaster comes a year after torrential rains caused widespread flooding along the Yangtze river basin in southern China—the worst crisis since 1998. The National Cultural Heritage Administration announced last July that it would prioritise flood protections for cultural heritage in 11 southern provinces, where more than 500 immovable cultural relics had suffered water damage.

But scientists and officials warn that these extreme weather events are likely to accelerate with global climate change. Karsten Haustein, a climate scientist at the University of Oxford, told Bloomberg that the annual monsoon season and mountainous terrain in Henan makes it “highly susceptible” to floods, but the impact is “supercharged” by climate change. The director of the National Climate Centre of China, Song Lianchun, said in February that “the frequency and severity of extreme temperature and precipitation events will increase in the future”.

In recognition of the urgent threat climate change poses to cultural heritage worldwide, the Unesco World Heritage committee endorsed a new climate action draft policy at its 44th session hosted by China in July. Final revisions are due by 15 September before the policy is submitted for adoption at the general assembly of state parties to the World Heritage Convention in November.