Amid increased unrest over memorials since the Black Lives Matter protests erupted, the grant will help fund new storytelling spaces across the country 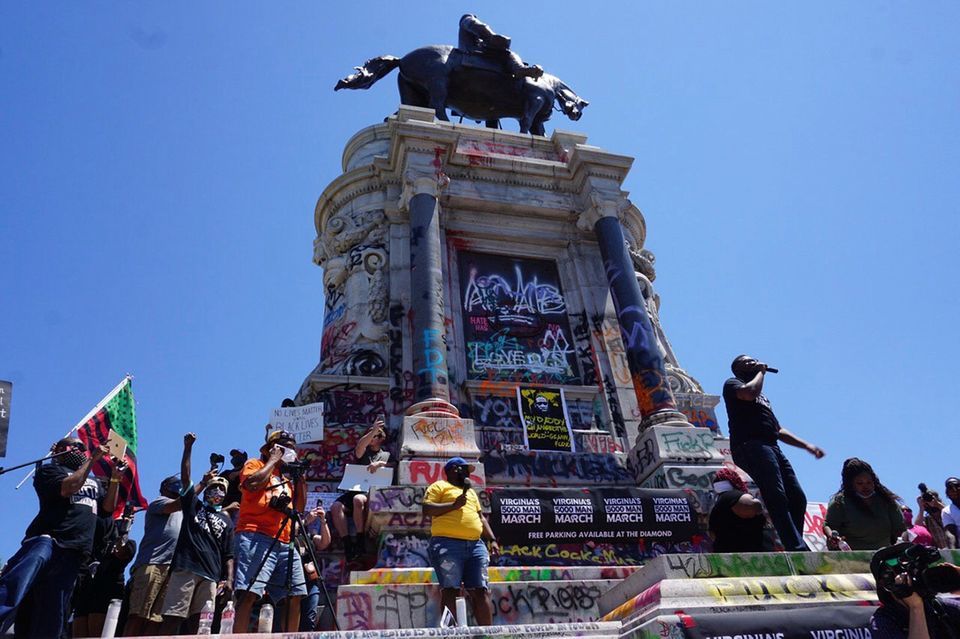 Protesters in Richmond, Virginia demonstrating against racial injustice and police brutality next to a statue of the Confederate general Robert E. Lee Artur Gabdrahmanov/Sputnik via Associated Press

As monuments and memorials across the US face a cultural reckoning in the wake of the Black Lives Matter protests, the Andrew W. Mellon Foundation, one of the nation’s biggest funder of arts, culture and the humanities, has announced a five-year $250m grant to the Monuments Project, an initiative that will aim to “reimagine and rebuild commemorative spaces” in an effort to “transform the way history is told in the US”, according to the foundation.

“Our history is the story of many different people living in glorious complexity, but we’ve been over-taught just one side of that story,” Elizabeth Alexander, the president of the Mellon Foundation, tells The Art Newspaper. “I joined the foundation with many years of teaching African-American literature and culture—always grounded in a historical context—and I’ve been thinking about our commemorative landscape in that same context for a long time.”

She adds: “I’m delighted that with the Monuments Project, the Mellon Foundation is committed to funding grants that will help tell a richer, fuller story about who we are and where we come from.”

The announcement comes amid scrutiny of contested monuments and memorials in the US as protests have erupted over the killings  of George Floyd, Ahmaud Arbery, Breonna Taylor and other African-Americans by the police. More than 300 monuments and memorials seen as valourising white supremacy have been vandalised and toppled by demonstrators or removed by city officials—and transferred to storage spaces or museums—across the country since May.

The grant will help fund new monuments, memorials or historical storytelling spaces and the relocation of existing monuments or memorials—an often costly and bureaucratic process in states with laws created to protect such statues—and will contextualise existing monuments or memorials through installations, research and educational programmes that illuminate the role of diverse communities.

The first major grant issued under the Monuments Project will be a three-year $4m stipend to support the Philadelphia-based Monument Lab, a non-profit art organisation that supports public projects in cities throughout the US and aims to highlight stories of social justice through art in public spaces.

According to the foundation, Monument Lab will use the grant to expand its headquarters and support the growth of full-time staff. It will use $1m to open ten research field offices across the US that will “build a network of civic practitioners who build on national momentum, informed by local strategies and tactics, to shift the way history and art live in public, and will commission new forms of knowledge production”, the foundation says.

The organisation will also collate existing data from national, state, municipal and public sources to assess the current monument landscape across the US. And the initiative will size up  monuments within specific regions  and communities  to create a comprehensive database of protest activities, yielding  a fuller accounting for  Wikipedia’s incomplete list of memorials affected by ongoing civil unrest.