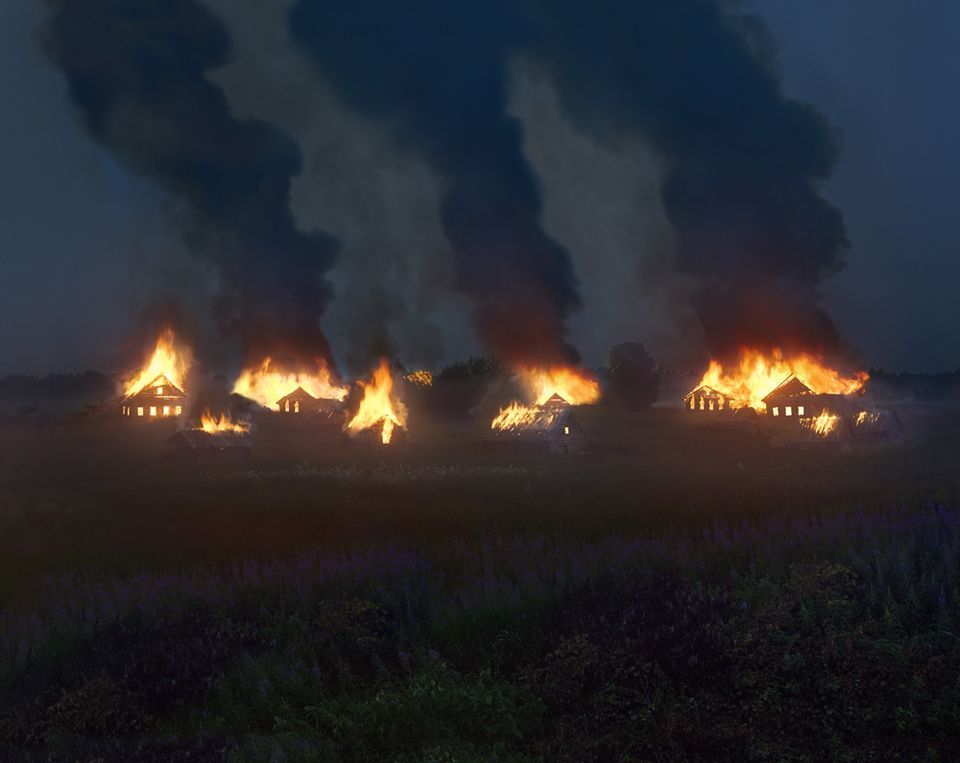 A Russian photographer could face jail time for burning down several abandoned buildings. Twenty-eight-year-old Danila Tkachenko’s 2017 Motherland project documents the annihilation of villages, the plight of small farmers struggling to compete with big corporations, and “a state over-reliant on oil, which has shown no interest in developing agriculture”.

“In modern Russia, the trend of a contraction in the numbers of rural villages has continued. Over the past 20 years, 23,000 villages have disappeared,” reads his website. “Since 1917, Russia’s rural population has contracted by more than 80%. The collectivisation of 1928-37 was the first stage in the destruction of Russian villages.”

The Krokhino Foundation, which strives to preserve Russia’s cultural heritage, has slammed the project and is reportedly planning to appeal to the Ministry of Culture and Federal Property Management Agency, claiming Tkachenko has committed arson. “We can’t bring charges against him, but we must find out if that’s a possibility,” the foundation’s head, Anor Tukaeva, told Gazeta.ru.

According to article 167 of Russia’s Criminal Code, a charge of non-terrorist related arson carries a maximum sentence of five years.

“He’s burned houses that are someone’s private property… art critics should not be evaluating this project; it should be assessed by the employees of the public prosecutor’s office, within the framework of current legislation and Russia’s criminal code concerning arson, damage to property and damage to objects of cultural heritage,” Krokhino posted on the foundation’s Facebook page.

World Press Photo Award (2014) winner Tkachenko declined to comment but earlier told Colta.ru that he made sure the properties were deserted before torching them: “I didn’t burn houses in which you can still live. The houses I chose were rotten, with collapsed roofs. I did not do anything to harm anyone.”

Kirill Svetlyakov, the head of the Contemporary Art Department at Moscow’s State Tretyakov Gallery, says Motherland offers a cessation to the death of the village subject: “This topic is not new at all, it was raised by artists in stagnant times from the late 1960s to the 1970s. Tkachenko brings this theme to an end and turns it into a fiery apocalypse. [He] has his own approach. Yes, he made a radical gesture, but he works with space in an interesting way...there are artists creating works as if they do not see anything around them at all—Tkachenko is not closed off.”

He is not the first Russian artist to find himself in hot water for playing with fire. In 2015, Petr Pavlensky doused the entrance to Russia’s Federal Security Service with gasoline before setting it alight. Earlier this year he also started a blaze outside a Bank of France office in Paris. He was charged 500,000 ($8,430) for the first crime and is currently awaiting trial for the second.

UPDATE: This article was updated on 11 December to include a comment from Kirill Svetlyakov.