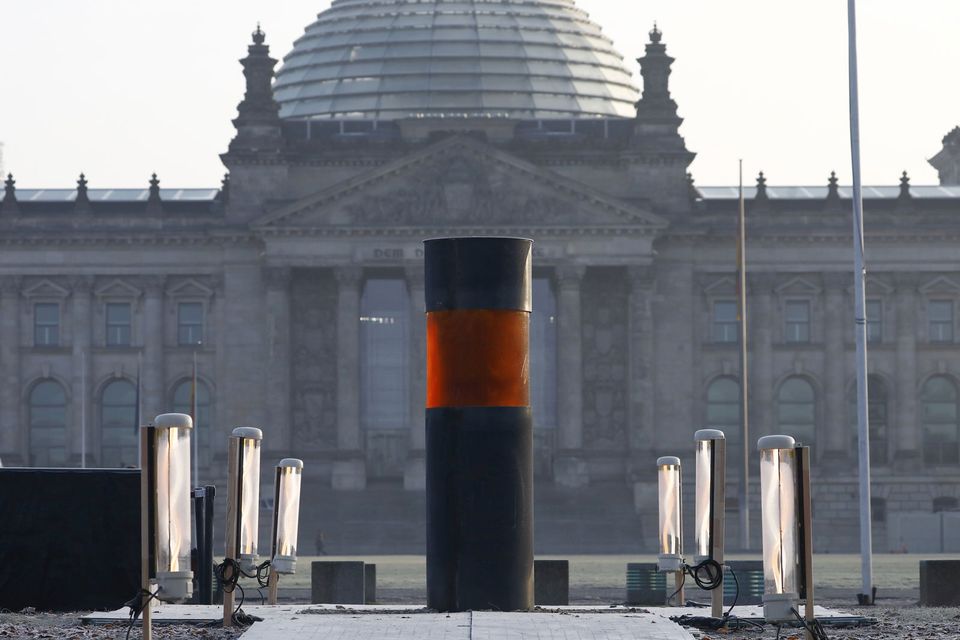 A German art collective known for provocative stunts has angered Holocaust survivors with a monument installed this week that the artists say contains the remains of Jewish people who died at the hands of the Nazis.

Zentrum für Politische Schönheit (Centre for Political Beauty) says on its website that the 2.5-metre high steel monument was installed “at the place where democracy was eradicated” near the Reichstag in Berlin in 1933. It is intended to target members of Chancellor Angela Merkel’s conservative political alliance who have raised the prospect of governing with the support of Alternative for Germany, a far-right, anti-immigration party.

“Auschwitz survivors are dismayed at this hurtful monument which disturbs the eternal rest of their murdered relatives,” Christoph Heubner, the executive vice president of the International Auschwitz Committee, said in a statement. “The idea that the ashes of their murdered family members have been transported across Europe for demonstrations is hard to bear. Even if they understand and respect the political intention of the initiators, they consider this kind of demonstration disrespectful.”

Centre for Political Beauty describes itself on its website as “an assault team that establishes moral beauty, political poetry and human greatness while aiming to preserve humanitarianism. The group’s basic understanding is that the legacy of the Holocaust is rendered void by political apathy, the rejection of refugees and cowardice,” it says.

The monument is on the site of the Kroll Opera House in Berlin, which served as the assembly hall for the German parliament after the Reichstag was destroyed by fire in 1933. It was at this site that delegates passed the “Enabling Act” giving Hitler almost unlimited powers in March 1933.

“This is where conservatives entrusted German democracy to murderers,” the group says. “Until today, there has been nothing to commemorate this act of treachery.”

Centre for Political Beauty said it conducted laboratory tests on 248 soil samples from 23 locations near Nazi death camps; 175 of these were discovered to contain human remains. The monument has a permit lasting until 7 December, the group says. It is seeking to raise money to cement it into place at a demonstration that day.

Centre for Political Beauty seized headlines in 2017 with a replica of Berlin’s Holocaust Memorial installed next to the home of Björn Höcke, a leading member of the AfD. A criminal investigation into the group, initiated by the prosecutor in Höcke’s home state of Thuringia, was dropped this year.