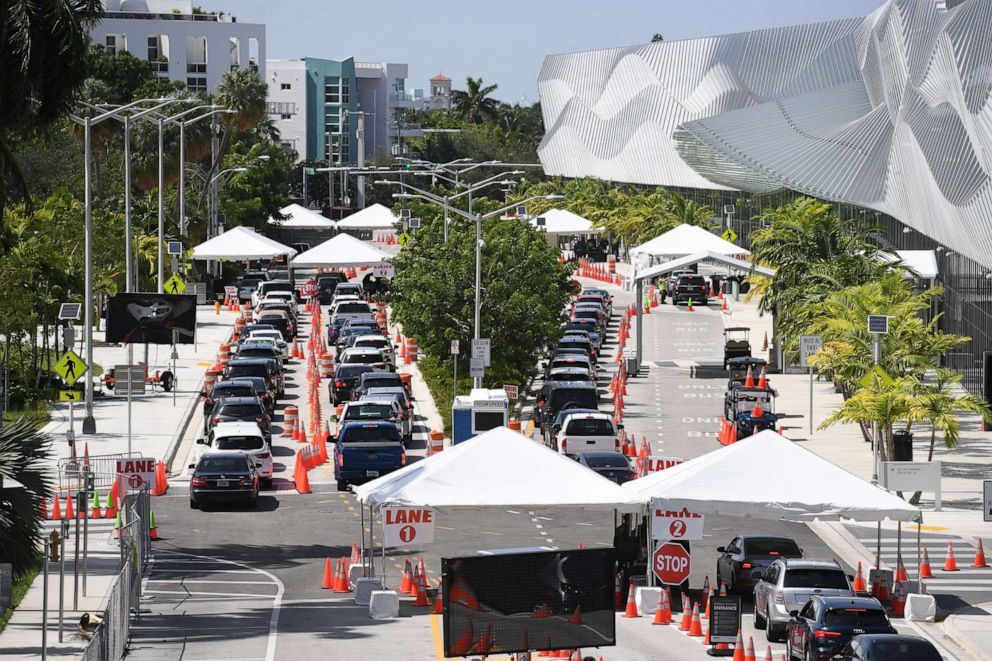 Cars wait in line at the coronavirus drive-in testing site, set up at the Miami Beach Convention Center in Miami Beach. Larry Marano/Shutterstock

It is hard to imagine Art Basel in Miami Beach being held inside its usual convention centre, not least one that is currently being used as a coronavirus (Covid-19) testing site and temporary hospital. In a letter sent to exhibitors today, the organisers of the fair acknowledged the ongoing uncertainties, announcing they are waiving the 75% booth fee charge for dealers who pull out of the event after 1 August. Full booth costs are still payable by 1 October ahead of the fair opening on 3 December.

Signed by Noah Horowitz, the director of the US fair, among others, the organisers say in their letter they “are following the latest developments in the US and South Florida closely, and are in regular dialogue with both city authorities and our local partners”. The Florida Department of Health this week extended the hospital lease on the convention centre until 6 September, with an option to add a further 30 days as Covid-19 cases surge in Florida. To date, the temporary hospital remains unused.

While the income will no doubt be welcome, according to the website Re: Miami Beach, the monthly rent paid to the newly refurbished convention centre by the Department of Health is $228,750, just 25% of the usual market rate of around $915,000 a month. Those behind the convention centre, including Miami Beach city officials, are, unsurprisingly, keen for the art fair to go ahead.

The fair's organisers, meanwhile, are keen to stress that any decision by dealers to withdraw will not impact participation in future shows. “We fully recognise the complexities of the current situation and value above all else our longterm relationship with you,” they say. “Our main focus at the moment is to give you as much support and flexibility as possible during this period of uncertainty.”

An update is promised by early September “at the latest”. In the meantime, plans are still tentatively being laid. Booth sketches will be sent in mid-September, as will the acceptance decisions for participation in the Meridians sector, dedicated to large-scale works, and the thematic Kabinett section.

For now, the organisers say they are “deeply committed to holding the fair in Miami Beach if at all feasible”, even if it is “challenging to predict what the global situation will be like in December”.

No fewer than 20 satellite fairs will also be nervously eyeing the situation, among them Volta Miami, which is due to debut on 1 December, replacing the long-running Pulse art fair.

Volta’s director Kamiar Maleki says he still plans to launch in the US in December, but remains “very flexible” as galleries grapple with the current restrictions around travel and other uncertainties.

“We have initiated a plan to enable galleries to either rollover their booth payments or receive repayment within 12 months,” Maleki says. “Our job is to support the galleries with a robust selling platform; we have all been suffering.”

The fair will relocate from Miami Beach, where Pulse was held, to Mana Wynwood where Maleki anticipates around 60 galleries will take part. “If there is a second wave [of coronavirus] now, hopefully it will soon pass and people will feel more confident come December,” he says. “We just have to stay positive.”