UPDATE: On 6 March, Art Basel cancelled its fair from 17 to 20 September citing the current coronavirus pandemic. The next Art Basel will take place from 17 to 20 June 2021 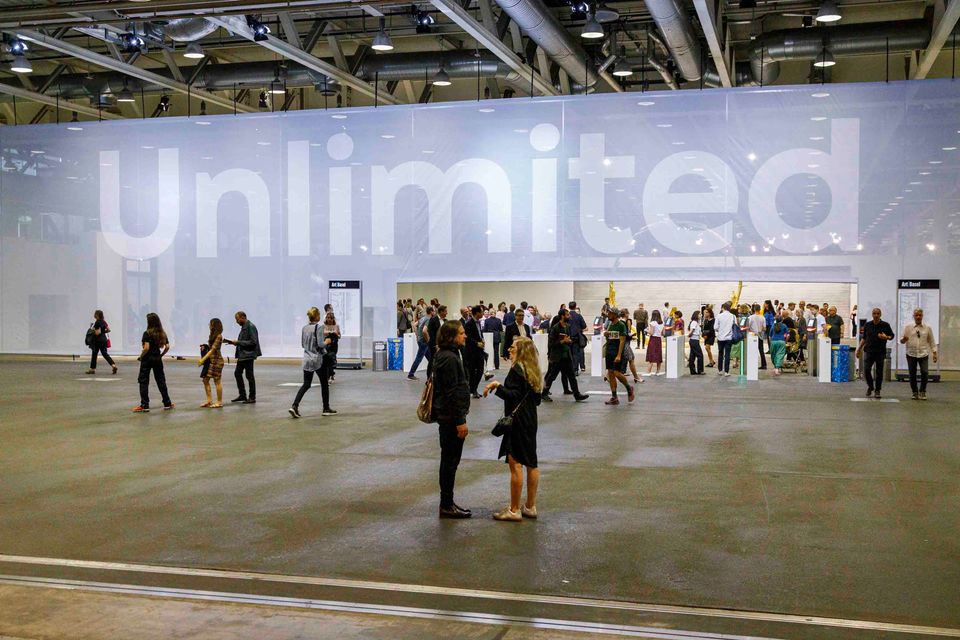 Ironically, any edition of Art Basel that does happen this year will do so under considerable limitations Courtesy of Art Basel

The organisers of Art Basel were hoping for clarity from Swiss authorities this week over whether its already postponed 50th anniversary fair can go ahead from 17 to 20 September.

On Wednesday, the Swiss Federal Council announced steps to ease its coronavirus-related restrictions , including reopening theatres and cinemas and plans for the reopening of borders within Europe. But, nothing on large-scale events—that decision is now delayed until 24 June.

In a letter sent to exhibitors yesterday, Marc Spiegler, Art Basel's global director, and Andreas Bicker, its head of business and management Europe, said: "Given the improved new-infection-rate situation here, we had hoped that the council would give us distinct guidance concerning new regulations for large-scale events, which would have been very valuable for us in assessing whether, and under what conditions, we could deliver the planned September show."

They continue: "We know that you were hoping for more clarity by now. So were we. In our recent conversations with gallerists worldwide, many expressed their desire for the fair to go forward – particularly those living in countries whose societies have successfully begun re-opening after long lockdowns. That said, many gallerists have also shared their concerns, reluctance, or unwillingness about doing the Basel show."

Given the ongoing uncertainty, Art Basel's 1 June exhibitor application deadline (already delayed from 1 May) has been scrapped. But, Spiegler and Bicker say, "we know that we cannot wait until late June to give you a clearer picture concerning the September 2020 fair. Therefore, we are working hard in analysing what the rapidly evolving situation means for our ability to hold Art Basel in September, and what form it could take."

They promise a further update "by the end of next week at the latest" and call for galleries to submit their views. The candid tone of the letter echoes that of a similar one sent to exhibitors in late April—with almost everything in doubt, this is not a time to try to pull the wool over exhibitors' eyes. Numerous autumn events have already been cancelled, such as La Biennale Paris (due to take place at almost the same time as Art Basel) and yesterday, the Lapada fair in London announced the cancellation of its event in mid-September—the event normally shares a tent and costs for it with PAD London, due to happen in early October during Frieze week.

Last night, The Canvas art market newsletter reported that an open letter addressed to Spiegler and signed by Claes Nordenhake of the eponymous Berlin and Stockholm gallery had been "circulating galleries", requesting signatures. According to The Canvas, the letter asks that the fair does not happen "in this apocalyptic context". It begins: "Art Basel is the most important and powerful art fair in the world but even in the best possible scenario, an edition held this year would be a mere shadow of its established stature and imperil its reputation." It adds that the outbreak of Covid-19 cases at Tefaf Maastricht in March should add as a cautionary tale and says: "We must assume that fear of travel and exposure will prevent many valued visitors from attending."

An Art Basel spokeswoman tells The Art Newspaper: "We have not yet received the mentioned Nordenhake letter. Our exhibitor letter was therefore not in response, but rather was a proactive update to the galleries following the announcement by the Swiss Federal Council." Nordenhake did not respond immediately to a request for comment.