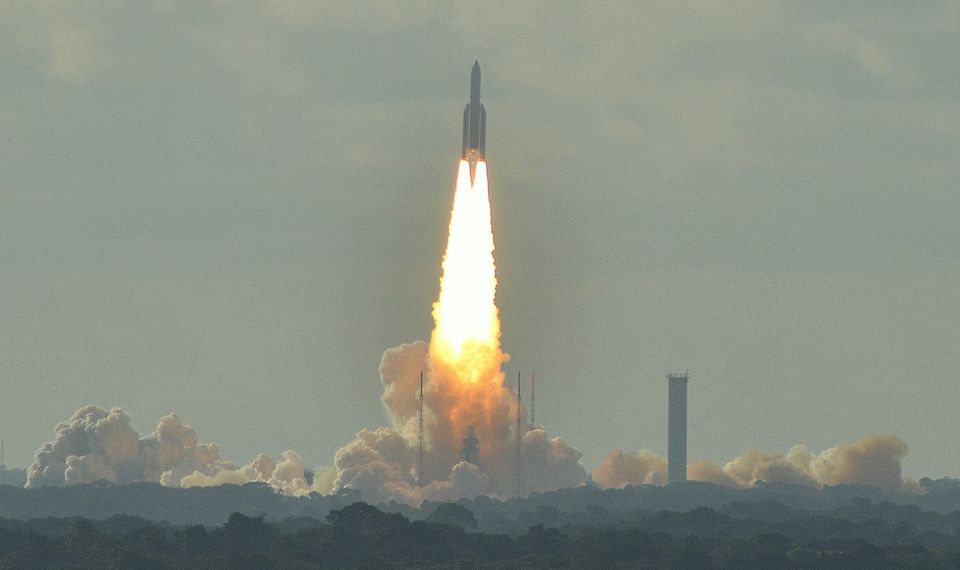 The work will be mounted on an Ariane 5 rocket

A French NGO is planning to send a work by an African artist into space in 2021 by placing it onto the nose of an Ariane 5 launcher.

The project, called the African Art Space Project, was initiated by African Artists for Development (AAD), a philanthropic organisation founded in 2009 by the French collectors Matthias and Gervanne Leridon. AAD initiatives include a contemporary African art exhibition that has travelled to seven countries, financing the creation of three libraries in West Africa and bringing dance and music performances to a refugee camp in the Democratic Republic of Congo.

The space project is in partnership with the European Organisation for the Exploitation of Meteorological Satellites (Eumetsat), Arianespace, which produces the Ariane 5, and the World Meteorological Organization. AAD, which is a member of the United Nations Economic and Social Council (ECOSOC), presented the idea for the project to these bodies and the African Union last September in Abidjan, Ivory Coast.

The Ariane 5 launcher will be carrying a Eumetsat satellite into orbit that will observe the African continent and collect meteorological data about how Africa is being affected by global warming. The aim is to accompany this mission with a work by an African artist.

Gervanne and Matthias Leridon, founders of African Artists for Development, want to launch a work into space © Elodie Grégoire

“Africa is the continent that suffers the most from global warming but the one that produces the least CO2, so is the lowest contributor,” Matthias Leridon says. “In 2021, Eumetsat is going to launch a new generation satellite for meteorological observation [Meteosat Third Generation] whose mission will be to observe the African continent. We want to bring attention to the satellite's launch through the creation of a symbolic project—an artwork.” Data from the mission will be passed to African countries in a bid to help improve sustainable development and agricultural policy decision-making.

AAD appointed a selection committee to come up with a list of over 60 visual artists who have been invited to submit a proposal by mid-September. The committee comprises the South African curator Melissa Goba, the Nigerian singer/songwriter Keziah Jones, the French/Rwandan writer Gaël Faye and the French/Ivorian Jean Philippe Aka, publisher of the African Art Market Report.

The criteria stipulate that the artists must have been born in Africa, be under 40 and equally represent both genders. “They're artists that make photography or painting, not sculpture, because otherwise it would be difficult to transfer the piece onto the rocket,” Leridon says.

The artists have been asked to write a “note of intention” with graphics or drawings. The proposals will be whittled down to a shortlist of three in October, from which the winner will be selected in November by a jury including AAD, Eumetsat, Arianespace and the World Meteorological Organization.

The winner will spend a three-month residency to realise the piece next spring at Eumetsat in Darmstadt, near Frankfurt, where the satellite is being constructed and prepared for launch. The piece will then be transferred over several months onto the nose of the Ariane 5.

“The transfer period is a sensitive, technological stage because the film must not disturb the rocket's course in space,” Leridon says.

The work will be presented next year at the World Meteorological Organization's headquarters in Geneva and at Eumestat's annual African congress in Dar-es-Salaam, Tanzania.

This is not the first art project being fired into space. Last December, Trevor Paglen launched the Orbital Reflector, a lightweight, reflective sculpture housed in a box-like infrastructure known as a CubeSat, into space on a rocket. Once it was 350 miles from Earth, the CubeSat opened and released the sculpture that inflated like a balloon. It was intended to be visible from the Earth thanks to sunlight reflecting onto the sculpture. The American artist collaborated with the aerospace company Global Western and Nevada Museum of Art on the project.

However, the project failed to launch after the US government shutdown in January delayed the deployment of the work.