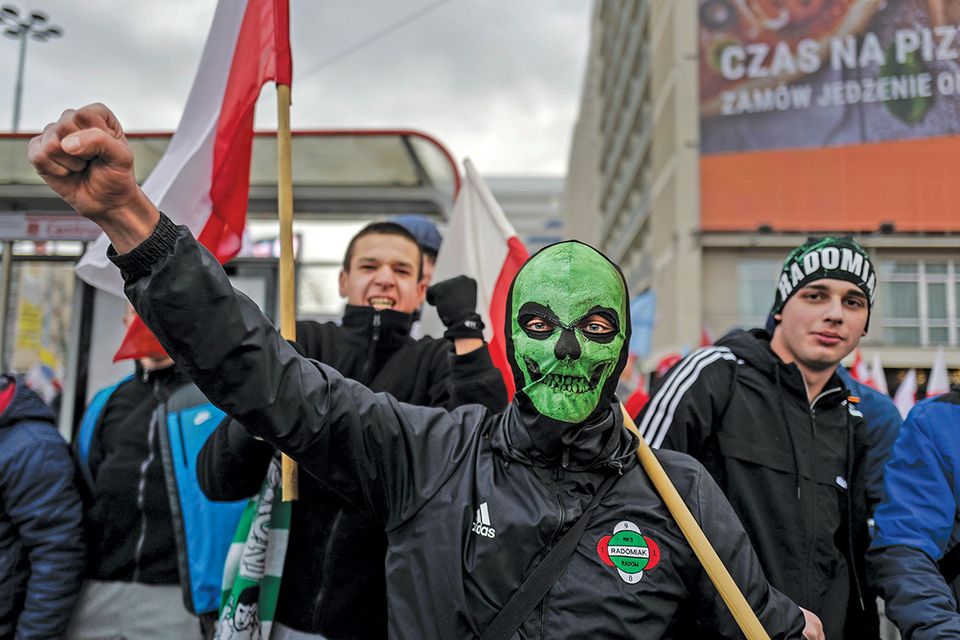 Growing xenophobia in Poland is typified by a 60,000-strong march by right-wing nationalists in Warsaw last November Chris Niedenthal/FORUM

A group of Polish art historians, curators and artists is calling on the directors of the National Museum in Krakow to take a stand against the rise of far-right nationalism in the country by staging a major international exhibition against fascism.

“In the face of increasingly frequent attacks on people with different colours of skin [and] in the context of the brutal contempt demonstrated towards minorities—the National Museum in Krakow has an important mission to fulfil,” the group wrote in an open letter to the director and vice director of the institution. “[You have] a chance to play an important role in educating Polish society,” they added.

The proposed show would examine how artists since the Enlightenment have opposed violence, acts of war and authoritarianism. “Goya, Delacroix, and later classical Modernists such as George Grosz, Pablo Picasso, and Andrzej Wróblewski, to name but a few—many of whom had first-hand experience of the horrors of war—addressed the issues of xenophobia and race-based violence,” the letter says. The art historian Pawel Brozynski, who helped write the letter, says that ideal partners for the show would be the Reina Sofía in Madrid, for its collection of works on the Spanish Civil War, and the Tate in London, for its pictures by John Heartfield, who chronicled the horrors of the Third Reich.

The increasing acceptance of far-right ideas in Poland was a major impetus for the initiative, Brozynski says. “It is happening in all possible fields, not only in politics but also in high culture and pop culture,” he says, citing the growing popularity of so-called “patriotic clothing” brands that have appropriated the symbols of Poland’s Home Army, the resistance movement against Nazi occupation during the Second World War. “It doesn’t have much to do with patriotism, but more with nationalism—in the worst sense of the word,” he says.

Poland has seen a steady rise in right-wing nationalism since the populist Law and Justice party (PiS) was elected in 2015. The party has been cementing its power in alarming ways, clamping down on the press, freedom of speech and the judiciary. Its emphasis on “Polish pride” has created a political climate dominated by xenophobia, which peaked last November when right-wing nationalists led a march of 60,000 people in Warsaw.

The government is also engaged in a battle over Poland’s past. Keen to refashion the nation anew, it is pushing to erase all remnants of Polish communist history as well as any suggestion that Poland was complicit in the Holocaust. In February, Poland’s president Andrzej Duda signed into law a bill that mandates a three-year prison sentence for anyone describing Nazi concentration camps in occupied Poland as “Polish death camps”. According to the government, the law, which has been criticised by the US and Israel, ensures that Poland is acknowledged as a victim, not an accomplice, of Nazi aggression in the Second World War.

The National Museum in Krakow, to which the open letter is addressed, recently staged an exhibition entitled #heritage that also seemed to have served this political project. Organised by the museum’s deputy director Andrzej Szczerski, one of the addressees of the open letter and the brother of Krzysztof Szczerski, the head of the Polish president’s cabinet, #heritage was a sweeping history of the country, told through objects in the museum’s collection. The hashtag in the title emphasises the need for “an open discussion about our heritage” and the “necessity to revise historical events”, according to the museum’s website. But the exhibition was roundly criticised precisely for its narrow representation of Polish history and deliberate omission of its darker chapters. “It exemplifies a traditional form of museological deceit, where profoundly political work is disguised as objectivity,” the art historian Erica Lehrer wrote in her review of the show.

Brozynski sees his anti-fascism exhibition as an opportunity for the museum to re-engage in legitimate political debate. “This appeal to the museum and its directors has to do with marking the line between conservative nationalism and far-right extremism,” he says. “If they are unable to make this distinction then this museum will just be a place for government propaganda.” As we went to press, the letter had been signed by around 500 art world figures, including the director of the Museum of Modern Art in Warsaw, Joanna Mytkowska. The National Museum in Krakow declined to comment for this article but has invited the initiators of the letter to submit an exhibition proposal.