The day after the US presidential election on 8 November, the Whitney Museum of American Art in New York received an unorthodox request from the artist Annette Lemieux. She asked if curators might be willing to turn her installation, Left Right Left Right (1995)—which had been on show there since April—upside down. Less than a week later, they did.

“It was an impulse,” Lemieux says. “I was looking at the image right side up and it felt somehow wrong, because I, like many people, felt defeated.” The work, included in the museum’s exhibition Human Interest: Portraits from the Whitney’s Collection (until 12 February), features 30 photographs of raised fists nailed to wooden poles like poster placards. Some of the fists belong to famous figures such as Martin Luther King, Jr, while others belong to anonymous people, including a sailor and a concert-goer at Woodstock. 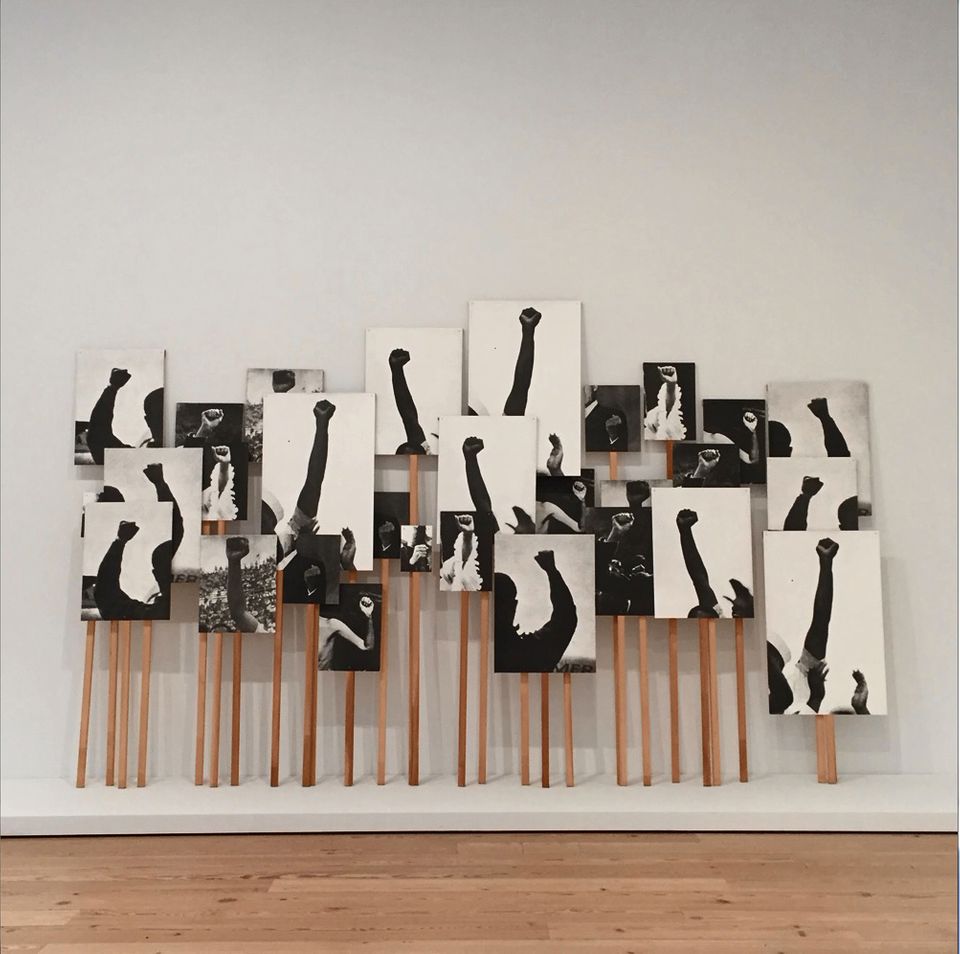 The inversion of the work coincides with a second phase of the Whitney’s portraiture show. Over the past two months, the museum has added 142 new works, including examples by Kerry James Marshall, Martha Rosler and Alison Saar.

Lemieux was originally inspired to create Left Right Left Right in the months leading up to another presidential election: the contest between Bill Clinton and Bob Dole in 1996. “The piece was responding to the bickering back and forth between the two parties,” she says. Although the campaign “seemed very nasty back then”, the work was intended as an expression of hope and a physical manifestation of the unity that can be felt in political demonstrations.

Before she contacted the Whitney, Lemieux toyed with inverting an image of the work, and liked the way it looked. “I never thought I’d want to put it upside down—but the election really did it to me,” she says. The museum’s chief curator Scott Rothkopf sent her inquiry up the chain to the director Adam Weinberg. On Tuesday, 15 November, while the Whitney was closed, the staff honoured her request.

Does Lemieux ever intend to turn work right side up again? “I would hope it would be righted someday, along with everything else in the world,” she says. “But right now is a really dark time.”

Meanwhile, Lemieux’s work is also on show in an exhibition at New York’s Elizabeth Dee Gallery. The show revisits Infotainment, an influential exhibition of 1980s artists inspired by the Pictures Generation (Every Future Has a Price: 30 Years After Infotainment, until 17 December). Lemieux’s work “hit a nerve as the political mood and legislation shifted right with Regan’s election in 1980”, Dee notes in a statement, and it continues to “confront inequalities of race, class and gender”.