Jeff Koons has donated more than $50,000 in cash and through his work to support the US presidential candidate

Jeff Koons’s donation of $50,000 to Correct the Record, a “Super Pac” (Public Action Committee) backing Hillary Clinton, is the biggest cash donation by an artist to this year’s US presidential campaign. According to reports from the Federal Election Committee, Koons made the donation on 17 June this year. But the artist has potentially donated significantly more in kind: he created a print in an edition of 40, Gazing Ball (da Vinci Mona Lisa), which was given to those who bought a $50,000 ticket to an auction hosted by Larry Gagosian in September. If all 40 of those prints sold, it would raise $2m for the Hillary Victory Fund, however a spokesman for the campaign said it could not release such donor information.

Two other artists also helped raised large sums through Correct the Record. Chuck Close has produced two prints featuring portraits of Hilary Clinton, one in an edition of 100 selling at $5,000 and another, much larger, in an edition of five, available for $50,000. Meanwhile, Deborah Kass’s edition, featuring a reinvention of Andy Warhol’s silkscreen made in support of George McGovern in the 1972 US election, with a snarling Donald Trump in place of Richard Nixon and “Vote Hillary” scrawled below, numbers 250, at $1,000 a print. If the editions sell out, Close would make an in-kind donation of $750,000 and Kass of $250,000. Close also produced a separate portrait print for the Hillary Victory Fund, in an edition of 50, at $10,000 each.

According the Washington Post, Clinton has raised more than a combined $1.3bn so far, versus Trump’s $795m. Federal law limits direct individual cash contributions to candidates’ campaigns to $2,700, and Koons donated that sum to the Hillary for America campaign in June 2015. But so-called “soft money” donations to Pacs—which according to the law can be used for “party building activities”, rather than for specific candidates—are unlimited and unregulated. Correct the Record gets around the rules that prohibit it advocating for a particular candidate because it is not “engaged in paid media and thus will be allowed to coordinate with campaigns and Party Committees”, according to a press release issued in May 2015. Hacked campaign documents published by Wikileaks this October appeared to show the extent of that co-ordination, involving senior Clinton aides including John Podesta, the campaign chairman.

“Correct the Record is an organisation that engages entirely in research and rapid response, so we don’t run ads of any kind,” the organisation’s president, Brad Woodhouse, tells The Art Newspaper. The staff follow “every single word that comes out of Donald Trump’s mouth every single day at every single rally and we compare that to what he said in the past, what the real facts are and then we push out press releases, digital products, videos, testimonial videos that we recorded with people that Trump has harmed.” The organisation also produces media “to respond to the negative online attacks from Republicans and Trump supporters and Hillary haters, so we have about a dozen people engaged in nothing but positive content on Hillary Clinton”. This includes a team dedicated to distributing “information that is particularly of interest to women and making sure that women have a voice in this election in ways that they haven’t in the past, especially if they are in households with husbands who might be supporting Trump”, he adds. 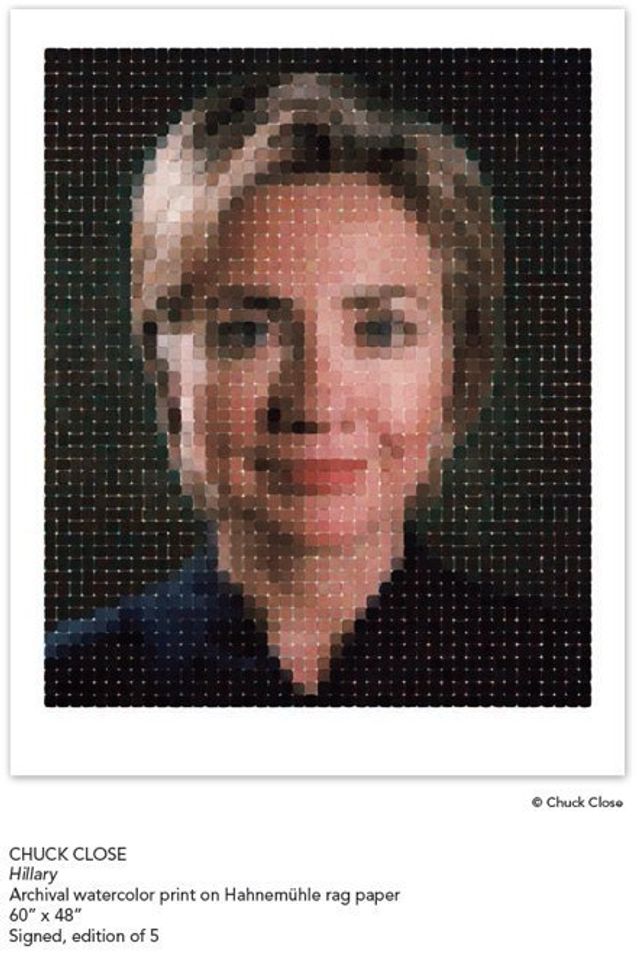 Koons was not available for comment, but recently told Monopol magazine that he had supported Clinton for 20 years. She awarded him with the Medal of Arts in 2013, when she was Secretary of State. Close, too, is a long-term supporter of the Democratic Party and the Clintons, in particular. “I have been involved in political campaigns starting with Bill Clinton and then Hillary for Senate, and I did a big thing for Barack Obama, and in between I raised a lot of money for Al Gore: every time there’s a Democratic presidential race, I’ve done art auctions or other things,” he says. In the case of Obama's re-election campaign in 2012, he produced ten tapestry portraits of the US president that were sold for $100,000 each, as well as an edition of related prints. “Artists are the last of the soft-touches; if you want contributions for a charity or anything like that, ask an artist.”

Meanwhile, in an illustration of the importance of art—and the art world—to the Democrat candidate, six artists were recently commissioned to create online works as part of the Artists for Hillary project. The works were “paid for by Hillary for America”, according to the website. Among the artists is Jenny Holzer, who created an animation of Clinton’s words as if they were beamed against the exterior of the White House. Holzer says she supports Clinton because “Trump has me quote Clinton: ‘I believe that the rights of women and girls is the unfinished business of the 21st century.’”

Woodhouse could not confirm the exact numbers of Close and Kass prints that have been sold, but anticipates that they will sell out, especially if Clinton is elected president on 8 November. The Art Newspaper could find no artists of renown who have donated to Trump’s campaign, either in kind or through cash donations.

• If you enjoyed this article, sign up to our newsletter to receive our top stories in your inbox.