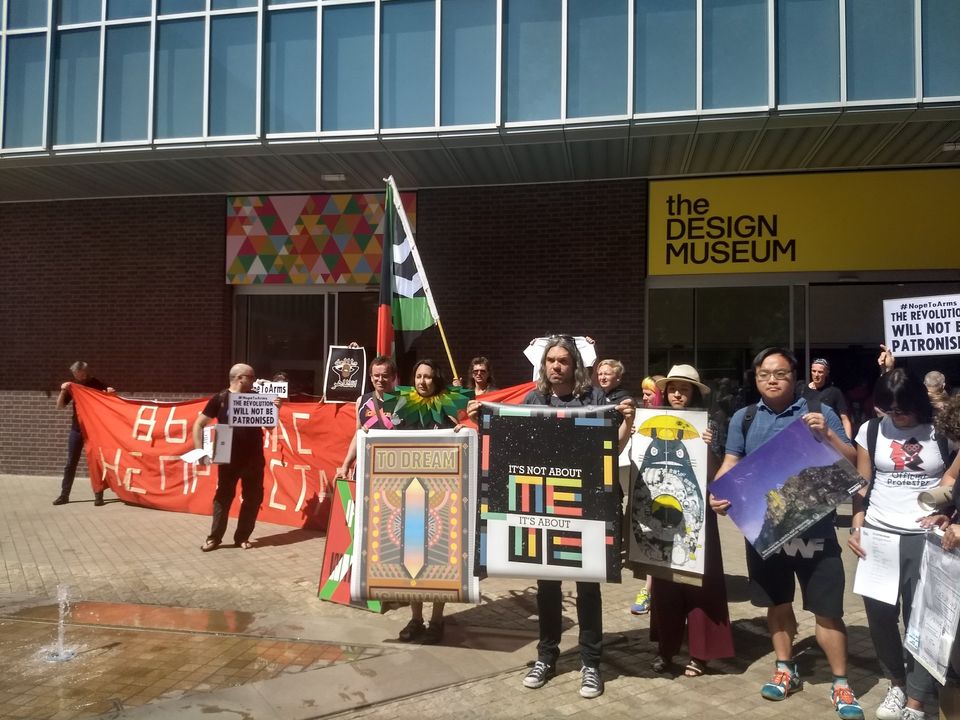 The British artist Peter Kennard was among a dozen artists who turned up to reclaim their work from the Design Museum this morning (2 August) after the London institution hosted a private arms trade event on 17 July.

They were part of a group of 40 artists and activists who had called for their work to be removed from the political exhibition, Hope to Nope: Graphics and Politics 2008-18 (until 12 August), or elsewhere from the museum. In a statement they said it was “deeply hypocritical for the museum to display and celebrate the work of radical anti-corporate artists and activists, while quietly supporting and profiting from one of the most destructive and deadly industries in the world.” More than 40 works, or one third of the the show, have now been removed.

Kennard, whose silkscreen print, Union Mask, was removed from the permanent collection display at his request, says he was “appalled” by the response to the protest from Deyan Sudjic and Alice Black, the directors of the museum.

The @DesignMuseum put on an exhibition of radical protest art. Then they hosted an event for an arms company.

That's why over forty artists in the show have demanded that their artwork is taken down.

In a letter published online, Sudjic and Black say “professional activists whose work didn’t feature in the exhibition took the view that the museum had acted wrongfully and were quick to exploit the situation”. They continue: “We do not want our programmes to be co-opted by the agenda of others and we stand by our curatorial independence.”

Describing their policies as in line with other museums around the world, Sudjic and Black add: “The outcome of these protests will be to censor the exhibition, curtail free speech and prevent the museum from showcasing a plurality of views.”

“All we want now is for the directors of the Design Museum to say they wont be holding any more events with the arms trade.” Peter Kennard

But Kennard says to attribute the protest to “outside agitators” is “demeaning” to the artists. “The directors are using a Daily Mail tactic to paint them as naive and influenced by these so-called professional activists,” he says. “These are artists and collectives with consciences, who are not only involved in making art, but how it goes out in the world.”

Campaigners say they were not aware the event, organised by the Italian aerospace company Leonardo to coincide with the Farnborough International airshow, was taking place. Kennard says the museum’s double standards were laid bare when it was revealed that another politically engaged panel, Corbynmania: Social Media and Jeremy Corbyn, was happening next door the same evening.

The panel's chair and activist Ash Sarkar wrote on Twitter: “This is Britain’s arts establishment in a nutshell: co-opting radical image makers to stay relevant, and facilitating the social calendar of slaughterers to stay wealthy.”

I was told there was a “private event” and was told to use separate entrances and exits.

This is Britain’s arts establishment in a nutshell: co-opting radical image makers to stay relevant, and facilitating the social calendar of slaughterers to stay wealthy.

Kennard, who protested in 2012 against Finmeccanica—as the company Leonardo was then known—and its sponsorship of London’s National Gallery, says he removed his work “in solidarity” with the artists in the Hope to Nope exhibition. “They gave all their work for free for a paying exhibition,” he says.

The political artist originally made Union Mask in response to the Cold War, updating the image for the Iraq War. “It’s an anti war work,” he says. “All we want now is for the directors of the Design Museum to say they wont be holding any more events with the arms trade.” In their statement, Sudjic and Black say: “We have committed to not having such private hires while we take time to discuss the issues with our peers in the sector and review if any of our policies need to be updated.”

Other artists who removed their work from the museum today include This Ain’t Rock’n’Roll, the Space Hijackers, Occupy Design Collective, Bristol Streetwear and BP or not BP. They were accompanied by activists from Syria, Hong Kong and Bahrain who they say “have been repressed using UK-manufactured weapons”.

“Until the exhibition ends on 12 August, it will now be free to visit." The Design Museum

Although not present, the Los Angeles street artist Shepard Fairey was among 40 artists to have signed a letter calling for their work to be removed from the exhibition, which explores how graphic design has shaped politics, starting with Fairey’s famous 2008 “Hope” poster of Barack Obama.

In a statement released today, the museum says: “Until the exhibition ends on 12 August, it will now be free to visit. We are sorry for any disappointment caused for visitors. We believe that it is important to give political graphics a platform at the museum and it is a shame that the exhibition could not continue as it was curated until its original closing date.”