The Louise Michel, a rescue vessel funded and painted by the British street artist Banksy to aid migrants stranded in the Mediterranean Sea, issued distress calls from Maltese waters over the weekend, pleading for European authorities to allow its passengers to come to port.

Sailing under a German flag, the Louise Michel had set out Thursday to assist more than 80 people marooned on a rubber dinghy. It then encountered a ship traveling from North Africa to Europe with 130 people aboard and some bodies of people who had died during the journey, according to the ship's Twitter account. With ten crew members in tow, the 101-foot-long Louise Michel quickly became overcrowded and could not properly steer, they reported.

On Saturday, an Italian coast guard vessel intervened on the behalf of Malta to take in 49 of the most vulnerable passengers, in addition to the body of a deceased man, according to Deutsche Presse-Agentur. Another German boat, the Sea Watch 4, later responded to the Mayday call and took on the remaining passengers.

The obligation to rescue at sea is an obligation under international maritime law. This obligation applies to every person in danger at sea- regardless of nationality, reason for flight or legal status. Every seafarer knows that by heart. #EU, you don't respect your own laws

Amid condemnations of European authorities' unresponsiveness issued on Twitter by the Louise Michel crew, Banksy weighed in on the situation with a video shared on his own Instagram saying: “Like most people who make it in the art world, I bought a yacht to cruise the Med. It’s a French navy vessel we converted into a lifeboat because European authorities deliberately ignore distress calls from non-Europeans. All Black Lives Matter."

The anonymous Bristol-born artist has long made works referencing the ongoing migrant issue in Europe and financed the Louise Michel after reportedly reaching out to Pia Klemp, the former captain of several other rescue boats, last September to ask how he might be able to help her cause. The vessel, which set sail in secret to avoid the attention of authorities from the Spanish port of Burriana on 18 August, features on its side a Banksy artwork depicting a girl in a life vest, riffing on his iconic Balloon Girl work. 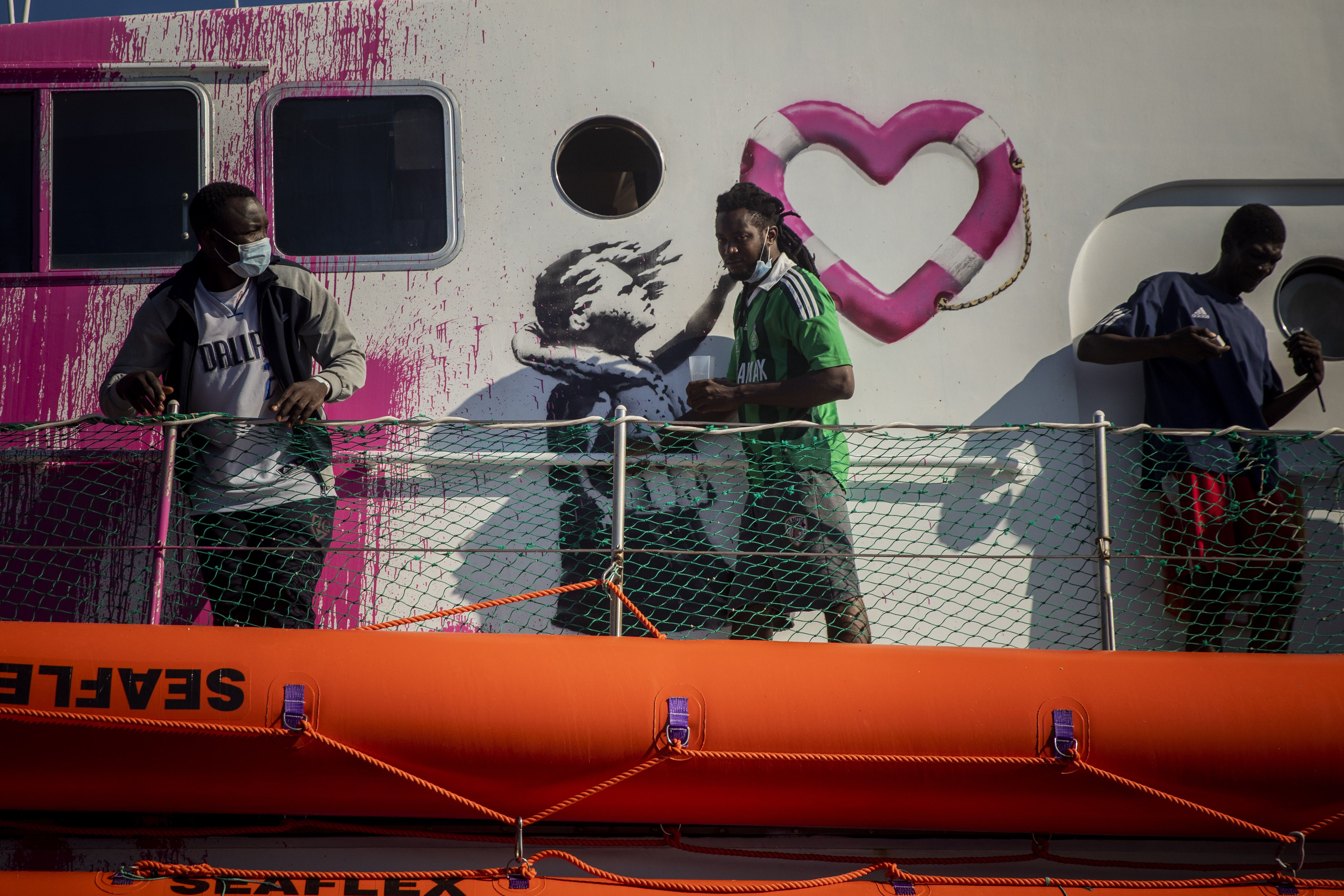 Man walks past a painting by Banksy on the deck of the Louise Michele rescue vessel, after performing two rescue operations on the high seas in the past days, 70 miles south west Malta. Santi Palacios/AP/Shutterstock

Last year, more than 100,000 people tried to cross the Mediterranean Sea from Africa and the Middle East and at least 1,283 people died, according to the International Organization for Migration (IOM). In 2020 alone, at least 500 people have died, although the number is probably higher, United Nations (UN) relief groups say. Last week, 45 people including five children died off the coast of Libya when a boat engine exploded.

Since March, European and nongovernmental rescue operations have been largely suspended or curtailed because of the coronavirus pandemic. Over the weekend the UN and IOM issued a statement saying that a lack of agreement among regional governments “is not an excuse to deny vulnerable people a port of safety and the assistance they need, as required under international law”.