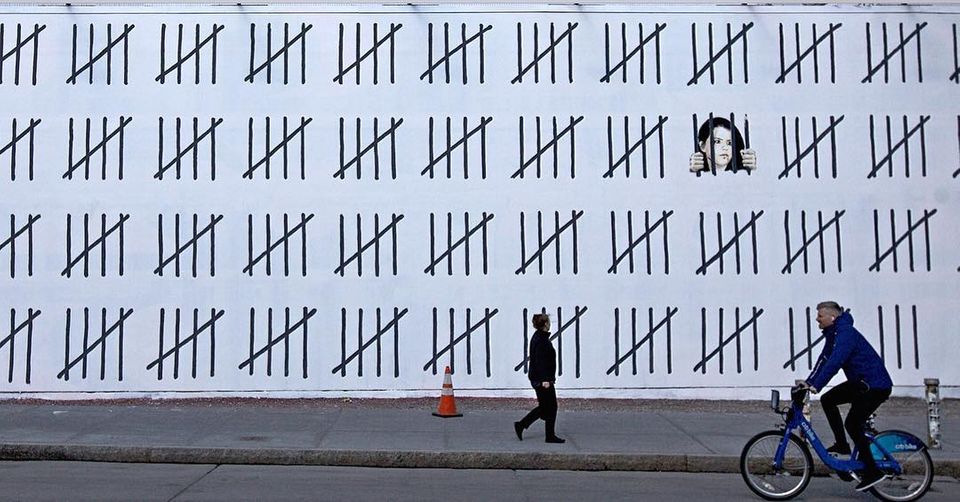 The first Banksy mural to be noticed, and certainly the largest thus far, is a 70-foot mural at the corner of Houston Street and Bowery that protests the imprisonment of the ethnic Kurdish artist and journalist, Zehra Dogan

Banksy is back in New York. The UK street artist has peppered the US city with several politically outspoken works since last Thursday (15 March) and keen-eyed New Yorkers have been tracking his work through social media.

The first to be noticed, and certainly the largest thus far, is a 70-foot mural at the corner of Houston Street and the Bowery that protests the imprisonment of the ethnic Kurdish artist and journalist, Zehra Dogan. In March of last year, Turkish authorities sentenced Dogan to two years and ten months in prison for posting a painting on social media that depicts the utterly destroyed Kurdish town of Nusaybin, with Turkish flags draped over the smoldering ruins in victory. (Her work is based on a photograph.)

Supposedly made in collaboration with the local graffiti artist Borf, Banksy’s stark mural features cages of black lines that tally the number of days Dogan has spent behind bars, and includes a portrait of her, looking out from behind a cell of slashes, and gripping a pencil. “I really feel for her,” Banksy told The New York Times. “I’ve painted things much more worthy of a custodial sentence.”

Elsewhere, at the corner of Fifth Avenue and 14th Street, Banksy stenciled one of his typical rats upon the face of a clock that crowned a soon-to-be demolished building. Hyerallergic reported that the property owner, Gemini Rosemont Realty, had removed the work to send it to auction. New York State Senator Brad Hoylman wrote a letter to the CEO, subsequently posted to Instagram, that urged it be kept on public view. “You might consider incorporating it into the façade of the new building or lending it to a local gallery or institution,” Hoylman offered.

Banksy’s tracks eventually led to Brooklyn. On a building beside a vacant lot at the corner of Coney Island Ave and Ave I, the artist produced a mural that remarks on gentrification and urban displacement, with an ensemble of dark silhouettes that are chased away by a real estate developer who wields a profit-pointing arrow. Close by was a seemingly less polemical work: a seal balancing a large ball on its nose, installed in an abandoned Mobile gas station.

Although both the mural dedicated to Dogan and the one in Brooklyn were defaced, the overall reaction to Banksy’s surprise New York residency has been mostly favourable, with his Instagram followers calling for the artist to extend his stay in the US and stop by other cities.