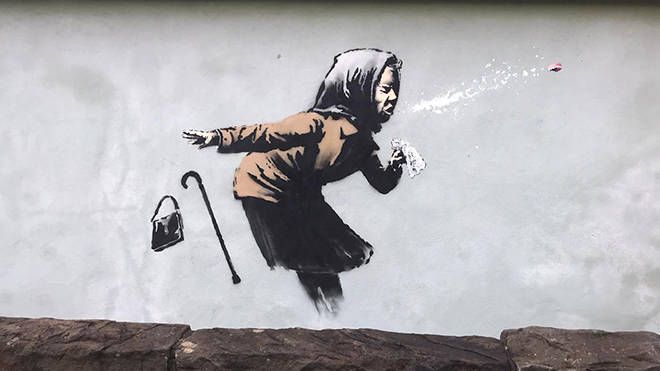 Banksy's Aachoo!! (2020) appeared on a house in Bristol earlier this week © Sam Cook

A new work by the street artist Banksy has appeared on the side of a house in his hometown of Bristol.

The work, titled Aachoo!!, depicts a woman sneezing with such force that her dentures are seen flying into the air. It was installed on the exterior of a semi-detached house in the neighbourhood of Totterdown yesterday morning, but only claimed by Banksy today on his Instagram page.

Since the confirmation, crowds have gathered outside the house, which is located on one of Britain's steepest streets and is known locally for hosting an annual egg rolling competition on Easter Sunday.

The work has now been covered in a sheet of transparent acrylic by the Makin family, who own the house, to prevent vandalism. Presumably a commentary on Covid-19, it is thematically linked to a previous work of Banksy's depicting a sneezing rat, which the anonymous street artist graffitied onto a London Underground train. The work was later mistakenly removed by unsuspecting cleaners.