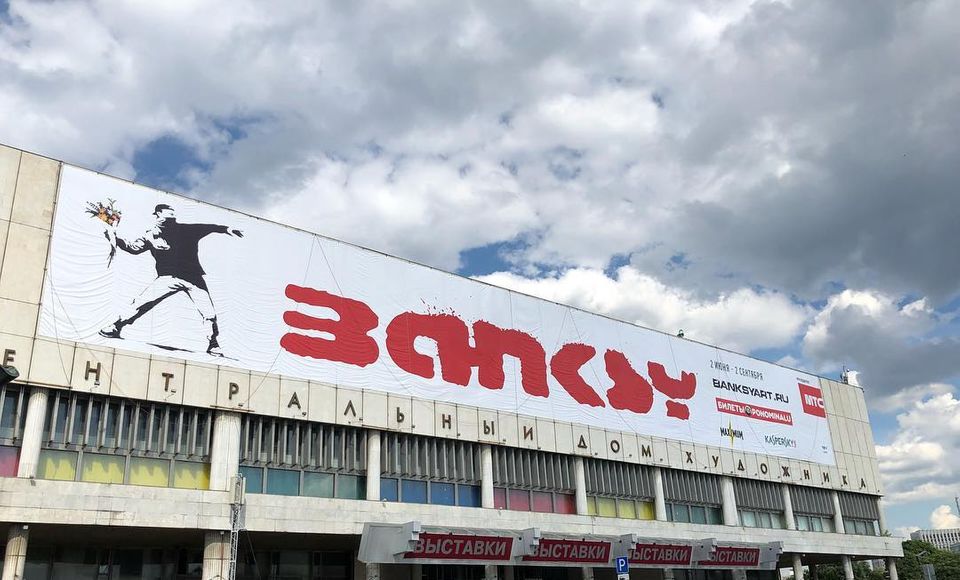 Genius or Vandal? It’s Up to You, an exhibition of Banksy's work, is on view in Moscow until 2 September and then travels to St Petersburg Courtesy of IQ Art Management Corporation

The organiser of Russia’s first Banksy exhibition responded on Thursday to the British street artist’s viral Instagram post about the show, in which he said: “It’s got nothing to do with me”. Writing to The Art Newspaper, IQ Art Management’s Alexander Nachkebia described Banksy’s comments as “rather restrained and ironic”, a sign of the show’s success and “an indirect acknowledgement of our exhibition”. As of Wednesday, 252,000 people had visited Genius or Vandal? It’s Up to You at Moscow’s Central House of Artists (until 2 September), and Nachkebia said it will travel to St Petersburg’s Main Imperial Stables exhibition hall (14 September-5 November).

Banksy’s screenshot on Wednesday of his correspondence with an unidentified commentator who informed him about the show set off a debate about artists’ rights that was tinged with irony, since Banksy’s identity has never officially been revealed. “Hmm—I’m not sure I’m the best person to complain about people putting up pictures without getting permission,” the street artist wrote, ending with, “LOL.”

Nachkebia said he did not know who wrote to Banksy, but suggested that the enigmatic artist did know about the show. “I think that more than 150,000 ecstatic reviews about the exhibition on social media, including around 5,000 from English people who came for the World Cup, concerts by the groups Massive Attack and Gorillas at the ParkLive festival right opposite the Central House of Artists—all of this caught Banksy’s attention,” Nachkebia said.

Reponses on Banksy’s Instagram page, both in Russian and English, ranged from expressions of shame that the artist’s rights had been violated, to thanks to the organisers, to suggestions on where in Moscow Banksy could create new works. “I already bought building materials and am ready to cut off the wall! I advise you to draw something in the metro area Kitay-Gorod. There is a very cool location,” one commentator wrote, adding: “Or opposite the Kremlin. Peace.”

Moscow’s art establishment has reacted with a mix of derision at the commercial exhibition and relief that someone was bold enough to shake things up. Kirill Svetlyakov, the curator of contemporary art at the New Tretyakov, which shares a space with the Central House of Artists, has been conducting tours of the exhibition. The exhibition, sponsored by the country’s largest mobile operator MTS, also has a large multimedia component.

Others said it was not really a Banksy street art show but a display of his prints. In a Facebook comment responding to this criticism on Thursday, Nachkebia wrote that the show includes “30 original works” that “Banksy signed personally”, including Rude Copper, which “is a print, but Banksy personally added a flourish of his to it, which makes it an original work.”

Nachkebia said that he worked with Andrew Lilley of Lilley Fine Art/Contemporary Art Trader, which advertises selling “Banksy prints that you just can’t get anywhere else”, to put together the show, which was in the works for eight months as tensions between Russia and the West escalated over sanctions and the poisoning of the former KGB spy Sergei Skripal in London. Nachkebia said that he can’t reveal the names of the private collectors whose works are on display, and noted that “everyone was very frightened by the situation in Russia” and he was repeatedly asked: “‘How can I be certain that my works will come back from Russia?”

Some, he said, “made impossible demands”, such as “unconditional return of the collection in case of any political or economic complications”. The insurance value of the exhibition came to £12m. “The insurance premium is less, of course,” Nachkebia said. “But it is still much higher for Russia than for any European market.”