Behind the scenes of Poland’s €100m art deal

Not everyone is happy that the country has bought the prized Czartoryski Collection, which includes Leonardo da Vinci’s Lady with an Ermine

The Polish government clinched one of the biggest art deals of the year in a great rush at the end of December. For the bargain price of €100m, it bought the Czartoryski Collection, a prized group of 86,000 objects and a library of 250,000 books and manuscripts, along with several buildings in Krakow, including the historic buildings that house the Czartoryski Museum. The undisputed star of the collection is Leonardo da Vinci’s Lady with an Ermine (around 1489-90), one of only 15 oil paintings attributed to the artist. Poland’s culture minister, Piotr Glinski, described the purchase as a “great day for Poland”.

The acquisition has been criticised, however. The board of trustees of the Princes Czartoryski Foundation, which owns the collection, resigned in protest at having been kept in the dark about the negotiations between its head, Prince Adam Karol Czartoryski, and the government. The board also questioned the legality of the move, saying it went against the foundation’s statute, which prevents the collection from being sold.

Shortly after the board’s resignation the statute was altered in an accelerated legal procedure in December, according to the Polish newspaper Gazeta Wyborcza. The foundation’s new trustees are Maciej Radziwill and Jan Lubomirski-Lanckoronski, both descendants of aristocratic families. When asked how the foundation intends to spend the €100m from the sale, Lubomirski-Lanckoronski told Polish media it would go towards scholarships and research.

The collection is widely believed to have been sold at a fraction of its value—for example, Leonardo’s Salvator Mundi (around 1490-1519), reportedly went for $127.5m (around €120m) in a recent private sale. Critics also questioned the merit of spending €100m on items that are already on public show in the Czartoryski Museum, which is co-administered with the National Museum in Krakow.

The museum has been partly closed since 2011, due to a costly and long-running refurbishment. In the meantime, many of the works are housed at the National Museum in Krakow; Lady with an Ermine is currently on display in Krakow’s Wawel Royal Castle.

The refurbishment is now likely to pick up pace. “We lacked the funds to renovate the Czartoryski Palace. So I think this is the best solution for Poland, the Polish people and international tourists,” said Adam Karol Czartoryski when the agreement was signed on 29 December.

The sale not only transferred ownership of the collection, but handed over all current and future restitution claims to the state, including the recovery of wartime losses, such as the Portrait of a Young Man by Raphael, which is still missing. Consequently, the foundation can no longer pursue or initiate the recovery of works from its collection.

The government also quietly announced another agreement with the Czartoryski family and its relations the Zamoyskis: the acquisition of the early Renaissance castle of Goluchow and its park (an important arboretum) in west-central Poland for 20PLN (around $5m). Since 1951, the castle has been used as an outlying branch of the National Museum in Poznan, while some of its art collection was dispersed across national museums in Krakow, Warsaw and Poznan and a number of pieces ended up abroad. In recent years, the collection has been at the centre of complex restitution claims. But unlike the terms of the deal with the Czartoryskis, claims for looted objects in the Goluchow collection remain firmly in the hands of the heirs.

The history of Leonardo’s Lady 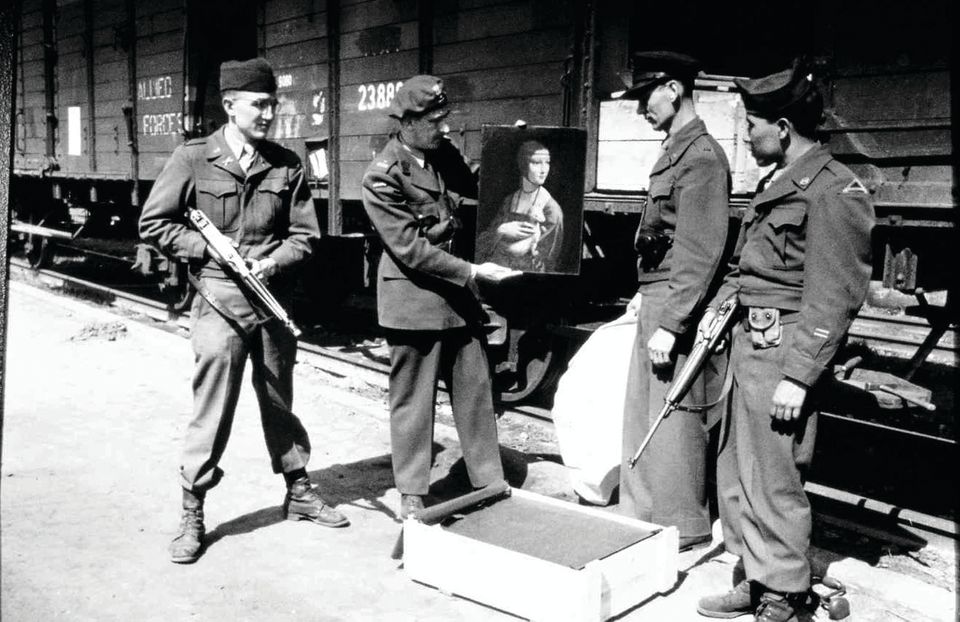 Soldiers pose with Leonard da Vinci's Lady with an Ermine upon its return to Poland in April 1946. © 2017 Monuments Men Foundation

The Lady with an Ermine (around 1489-90) by Leonardo da Vinci has a chequered history. The work depicts Cecilia Gallerani, the young mistress of Duke Ludovico Sforza of Milan, one of Leonardo’s greatest patrons. Little is known about the painting’s whereabouts until it appeared on the market in Rome in 1798 where it was bought by Prince Adam Jerzy, the son of Izabela Czartoryska, the Czartoryski Museum’s founder.

Following the November Uprising of 1830-31 when Russian troops attacked Warsaw, Princess Izabela sent the painting to Paris, where it was displayed in the family’s Hotel Lambert. It was shipped back to Poland in 1876 where it hung in the new Czartoryski Museum in Krakow. With the Nazis approaching Poland in 1939, much of the Czartoryski Collection, including the Leonardo and the Raphael, was sent to the family’s country estates across Poland. They were discovered by the Gestapo who earmarked 85 works (including the Leonardo) for Hitler’s museum in Linz. Hans Frank, the Nazi governor-general of Krakow, took a particular shine to The Lady with the Ermine, ordering it to hang in his office at the Wawel Royal Castle.

When Soviet troops entered the city, Frank took the work to his villa in Silesia. After Frank’s arrest, the allies returned it to Krakow, which was by then under Communist control. In the hands first of the Nazis and then of the Communists, the painting had been out of the family’s possession for more than 50 years. It was returned to the family in 1991.