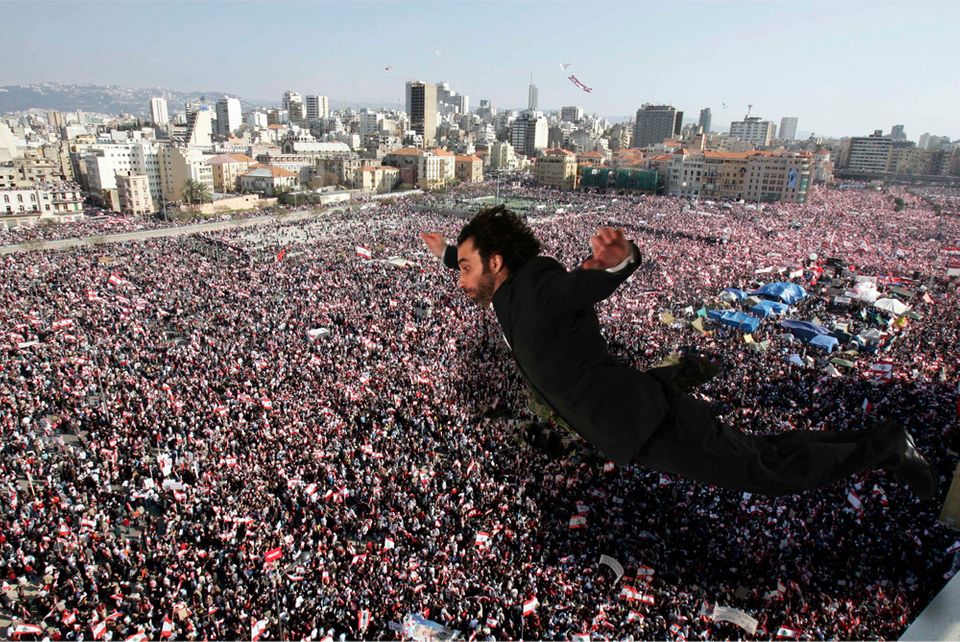 Rabih Mroué, Leap into the Void (2011) is part of Art Beirut's central show, Ourouba, The Eye of Lebanon Courtesy of a private collection

More than 20 early works on paper by Sarkis, Turkey’s preeminent artist, were among highlights offered to collectors at the Beirut Art Fair this week (until 24 September). Abstracts in earthy colours, they were made in Istanbul between 1963 and 1964, before he moved to Paris and won the 1967 Biennale de Paris painting prize. 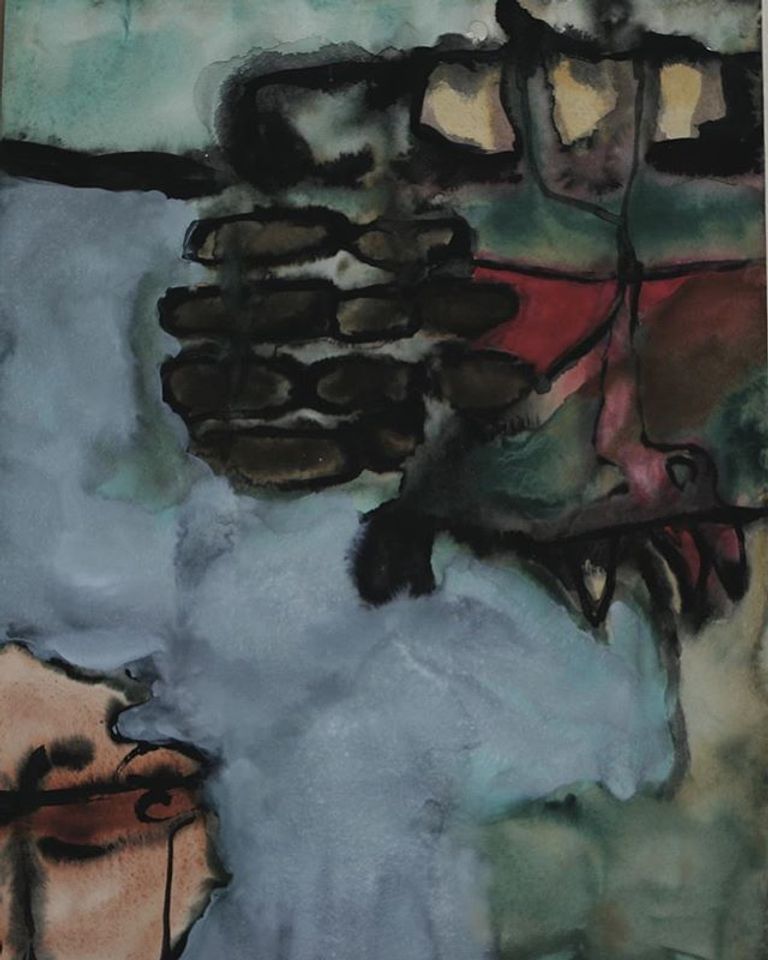 In a significant coup for the fair, the works in mixed media on paper are shown  by Paris’s Galerie Nathalie Obadia, a new participant this year. They are priced at $17,000-$33,000 and aimed at collectors in Lebanon’s significant Armenian community. The 78-year-old artist is of Armenian descent, and the works hint at similar themes in the stained glass work in his 2015 exhibition in the Turkish pavilion at the Venice Biennale.

The fair at the Beirut International Exhibition and Visitor Centre boasts 51 galleries in its eighth outing, up from 45 last year, hoping to build on $6m sales in 2016. Another overseas newcomer is Tunisia’s La Maison de la Place, a flagship of the burgeoning Tunisian scene in its first art fair.  Drawings by Othmane Taleb, with evocative figures in shadowy graphite, of Syrian refugees on the move  accompanied by angels, were a stand-out.

The fair is a strong regional showcase, with galleries from Greece, Jordan, the Gulf, and Algeria, and a strong Lebanese line-up. It is dominated by painting, and to a lesser extent drawing and photography, with little sculpture and almost no installation. Mark Hachem’s stand included  Chaouki Chamoun’s Flocking in Love (2017), at $130,000, among top-priced works.

At the heart of the art fair is the fascinating Ourouba, The Eye of Lebanon exhibition, with works loaned from more than 20 private collections in Lebanon, a large proportion from the leading Dalloul family collection.  With works from the last decade, it packed a powerful response from Arab artists to dictatorship, surveillance, civil war, and religion, and would be worthy of an international showing.

With artists from the late Marwan Kassab Bachi to Lebanon’s Baalbaki family, works included Wave, a Hokusai-style wall of surf in barbed wire, by the artist Abdul Rahman Katanani, who still lives in a Palestinian refugee camp. Mona Hatoum’s Doormat (Welcome), a welcome mat of stainless steel pins, was a sardonic comment on a refugee’s mixed welcome. 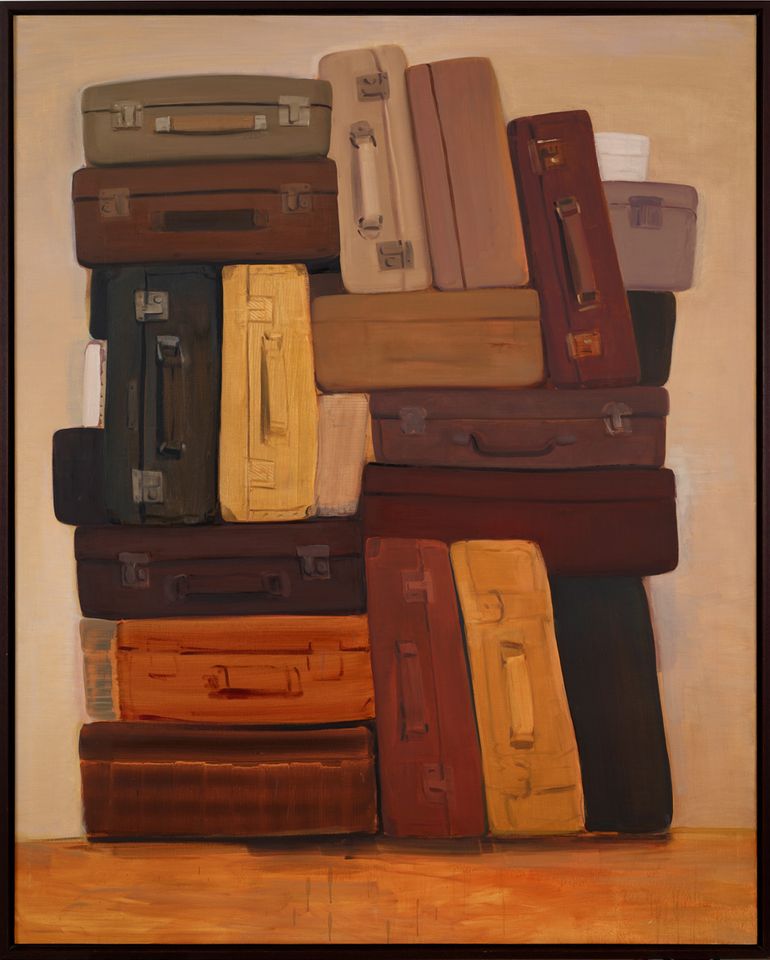 Mohamad Said Baalbaki are included in Ourouba, The Eye of Lebanon exhibition at Beirut Art Fair Courtesy of a private collection

Lebanese galleries included Artlab, a rising newcomer committed to younger artists, including six from Iran. They included Farshid Davoodi, who works in images on slices of stacked newspaper.   The painter Alireza Shojaian’s beautifully executed piece Perfect Moment of two dancers embracing is inspired by a Robert Mapplethorpe photograph, an unusual and striking exploration of male sexuality. 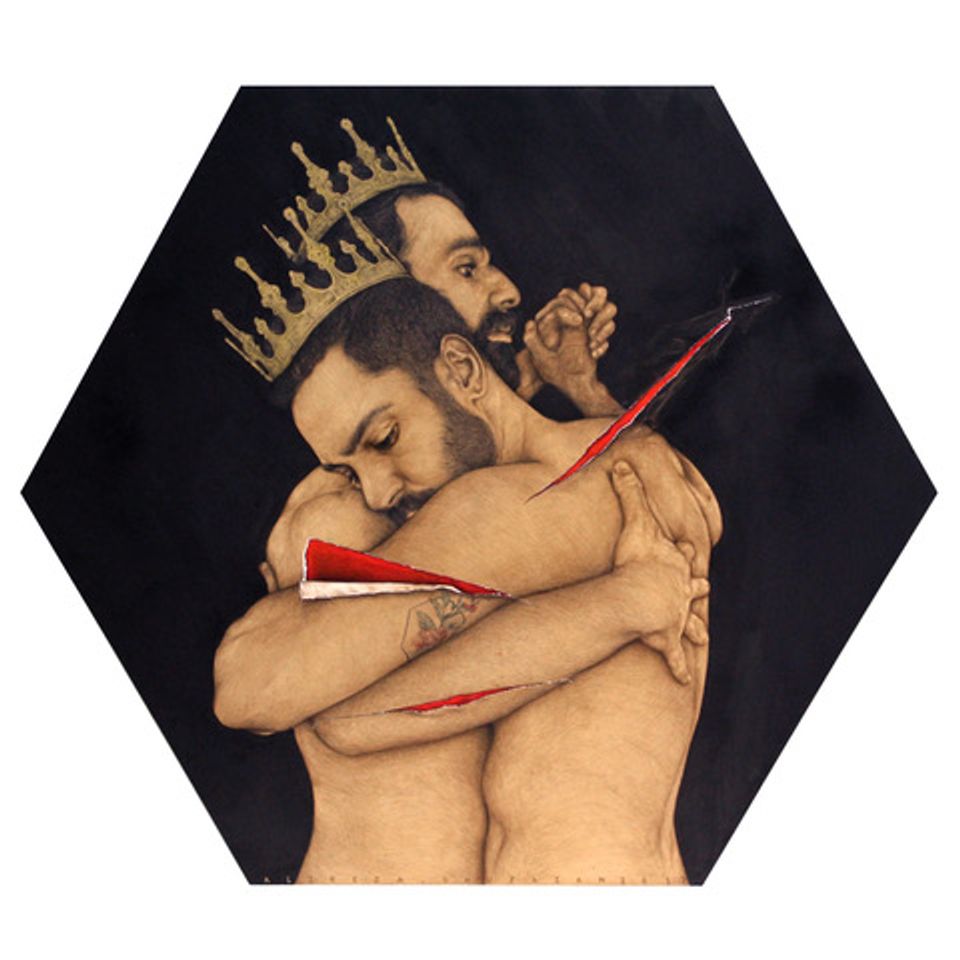 There is a strong showing of Syrian art across the fair, and one Syrian gallery, the Damascus-based Kozah Art Gallery.  Saad Yagan, whose Aleppo studio was destroyed in 2012, featured with Motherhood, depicting the body of a young man draped in his mother’s arms in the midst of mourning women. While several of the gallery’s artists are based outside of Syria one,  Fouad Dahdouh, remains a professor at Damascus University, and was recently received by President Assad, the gallery said. The young Syrian artist Maysan Salman showed a sculpture, The Sea Is Mine, of a figure seemingly prepared to pitch himself into the sea, standing on a trunk.  The 2015 work was priced at $7,500.