'We want to be part of the solution': UK museum says it is open to discussing fate of Benin bronze after prince demands its return

Bristol Museum & Art Gallery wants to work in tandem with the Benin Dialogue Group, which is made up of institutions that hold the majority of the pieces 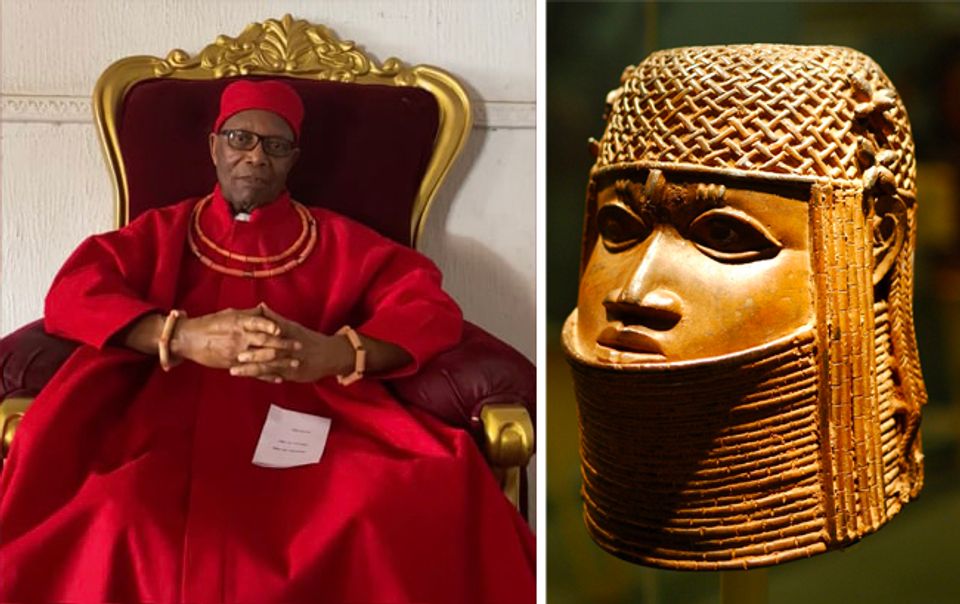 Left: Prince Edun Akenzua in an interview for the BBC; right: the Benin bronze in the Bristol museum's collection Akenzua: BBC Inside Out West; bronze: Matt Neale

Curators at Bristol Museum & Art Gallery in the UK say they will work with other museums in the so-called Benin Dialogue Group to try and resolve ongoing restitution issues linked to bronze artefacts looted by the British army in the late-19th century.

The move comes after Prince Edun Akenzua of the Royal Court of Benin called on the museum in Bristol to return a late 19th-century Benin bronze sculpture in an interview for the BBC TV show Inside Out West. "We are aware of the Benin Bronze at Bristol Museum," he says. "We are appealing to Bristol Museum to blaze the trail for the international community or private holders of the Benin cultural property to get them returned."

The museum consortium, known as the Benin Dialogue Group, is attempting to end decades of wrangling over the estimated 4,000 bronze and ivory artefacts looted by the British army from what is now southern Nigeria as part of a punitive expedition in 1897. Since the 1960s, Nigeria has repeatedly called for their return. Consortium members include the British Museum in London and the Humboldt Forum in Berlin.

A Bristol city council spokesman says it will work with the Royal Court in Benin regarding the request: “The issue over the Benin Bronzes is well recognised by the museum community across the country and the museums which hold the majority are working together, as the Benin Dialogue Group, to agree the best resolution with Benin authorities. Bristol Museum & Art Gallery, with just one bronze, is not part of that group but we welcome these initiatives and wish to work alongside them to be part of this solution.”

The bronze piece came to Bristol in 1935 from Cranmore Ethnological Museum with little supporting information, the spokesman adds. The museum, based in Chislehurst in Kent, was founded in 1928 by Harry Beasley and his wife Irene; after it was bombed during World War II, objects from the collection were given to other institutions such as the Pitt Rivers Museum at the University of Oxford, which belongs to the Benin Dialogue Group.

“For many years we have had our bronze on display, acknowledging its uncomfortable history and inviting visitors to consider what is the best course of action. As such it has contributed to the education of thousands of children about other cultures and about the negative aspects of empire and colonisation,” says the council spokesman.