The US artist dominated the top prices during New York sales series, where the commercial appeal of attractive subjects showed through in prices

Norman Rockwell, Blacksmith’s Boy – Heel And Toe (Shaftsbury Blacksmith Shop; “I’ll Never Forget That Last Hour. and never, i imagine, will any of those who watched. Both Men Were Lost To Everything Now But The Swing From The Forge To The Anvil, The Heels To Be Turned And The Toes To Be Welded.”), 1940 sold for $8.1m (est $7m-$10m) SEPS licensed by Curtis Licensing Indianapolis, IN. All rights reserved and courtesy of Sotheby's

The American paintings auctions on 22 May at Christie's and the following day at Sotheby's brought to the marketplace plenty of rarely seen work from private collections, but most notable was that being controversially deaccessioned from the Berkshire Museum. The romance between serious buyers and last century's best narrative and illustration art is warm but qualified.

Sotheby's 23 May sale, which totalled $43.3m, marked the dénouement of the Berkshire Museum's trustee-led raid on its collection to finance a contentious transition to a science and children's museum. The Massachusetts courts finally acquiesced to a supervised sale after a big fight. In the event, the best of the museum's whimsical collection sold— albeit with one big exception, the grand Valley of Santa Isabel, New Granada by Frederic Church. This was one of Church’s last sweeping South American landscapes, but it failed to sell with a $5m-$7m estimate.  However, after the auction The Pennsylvania Academy of the Fine Arts (PAFA) bought the work privately, for an undisclosed sum.

Sotheby's star was the Berkshire Museum's Shaftsbury Blacksmith Shop, painted by Norman Rockwell in 1940 and his homage to Velazquez's Vulcan's Forge. It went for $8.1m (all sold price include fees), just over the low estimate of $7m-$10m. Rockwell's Boy Playing Flute (1927) did well at Sotheby's at $4m on an estimate of $1.5m-$2m. This charming, clever work depicts a Huck Finn lookalike surrounded by dancing reptiles.

Most of the other Rockwell paintings sold near the low estimate—unless they depicted cute children. At Christie's, his Piano Tuner (1947) sold for $2.7m, scraped away despite being under the $3m-$5m estimate—the old piano tuner’s capacious derrière was perhaps a downer. Buyers looking for Rockwell saved their pennies for the Sotheby's auction the next day. 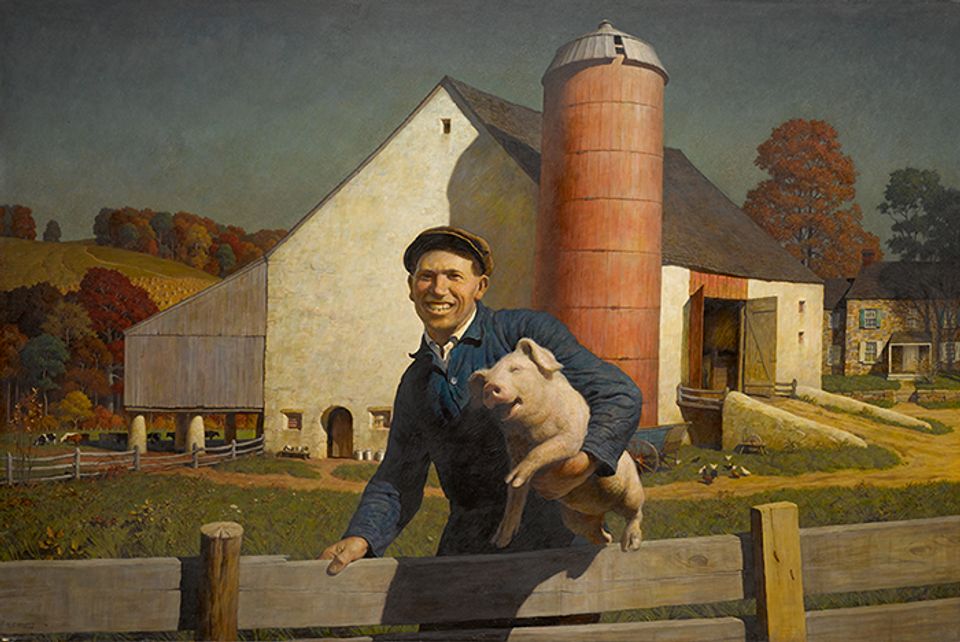 It was a good day for N.C. Wyeth. His Pennsylvania Farmer (1943)—depicting a winsome but decidedly homely farmer holding a smiling pig—sold at Sotheby's for $5.9m, above a $2.5m-$3.5m estimate and a new auction record for the artist. 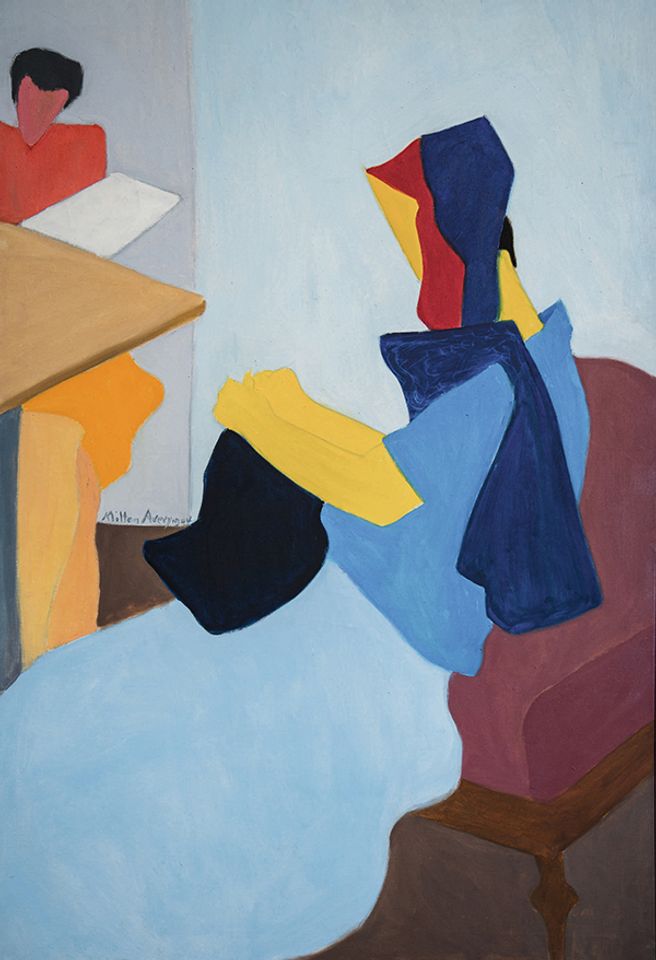 In a tale of two Averys, Milton Avery's strong The Seamstress—painted in 1944, the year he became famous—sold at Sotheby's for $2.1m, below the $2m-$3m estimate if we consider the premium. No proletariat chic this season. Meanwhile Avery's androgynous Red Nude (1954) fetched $3m at Christie's on a $1m-$1.5m estimate—that the playwright Edward Albee was a previous owner added to its cachet. Too bad, as The Seamstress is the better Avery.

American Impressionism did well at Christie’s, whose $32.8m sale, without the Berkshire consignment, came in behind Sotheby’s.  A splashy, glittering Childe Hassam from 1892, Conversation on the Avenue, estimated at $1.5m-$2.5m at Christie's, made $2.4m. Also at Christie’s, a sparkling painting by Louis Ritman, Woman With Watering Can, which had been in private hands since the 1920s, sold for $360,000, more than double the top end of its $100,000-$150,000 estimate. 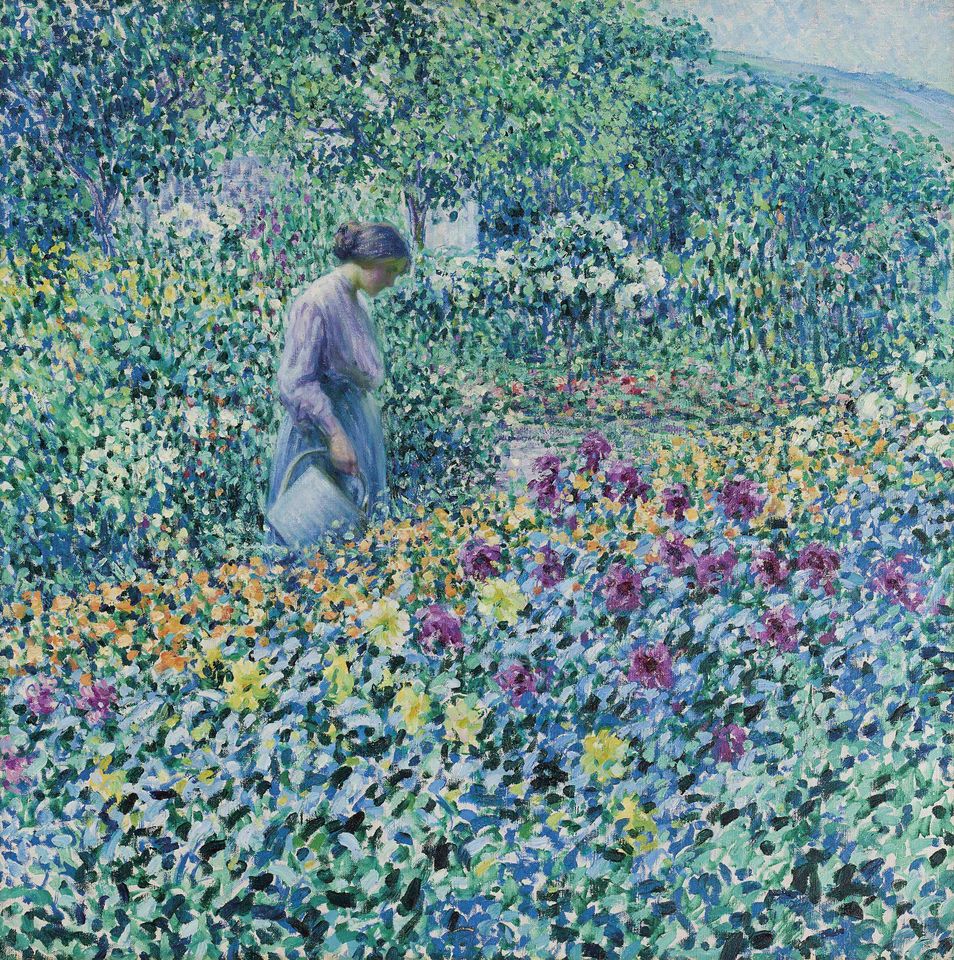 Louis Ritman's Woman With Watering Can

The market was less kind to a fine, late John Marin, Lead Mountain, Version II (1949), unsold at Christie's with a $500,000-$700,000 estimate, despite being privately owned since the Downtown Gallery sold it in 1951. A few things counted against the painting—it is thinly painted and uncharacteristic of Marin's dense, rich surfaces, and it is a Maine mountain scene rather than a seascape. The title, too, might be off putting—no one spending half a million dollars especially wants a version of something else.

At Christie’s, there was a tale of two John Singer Sargents, too, whose mixed fortunes illustrated the superficial commercial appeal of an attractive sitter. Mrs Archibald Williamson (1906) is a three-quarter length portrait of the wife of a prominent British politician at the time. Perhaps due to the fact the subject is not of the glamorous, sylphlike variety so prized in Sargent’s work, it failed to sell on an estimate of $200,000-$300,000.

However, also at Christie's a bit earlier in the sale, Sargent's striking Madame Helleu from 1889 was still a good deal at $828,000, though it topped the $300,000-$500,000 estimate. In the late 1880s, Sargent came his closest to Impressionist style. The subject is the wife of the artist Paul Helleu, Sargent's close friend, and she is as haughty and bohemian as Mrs. Williamson is staid. 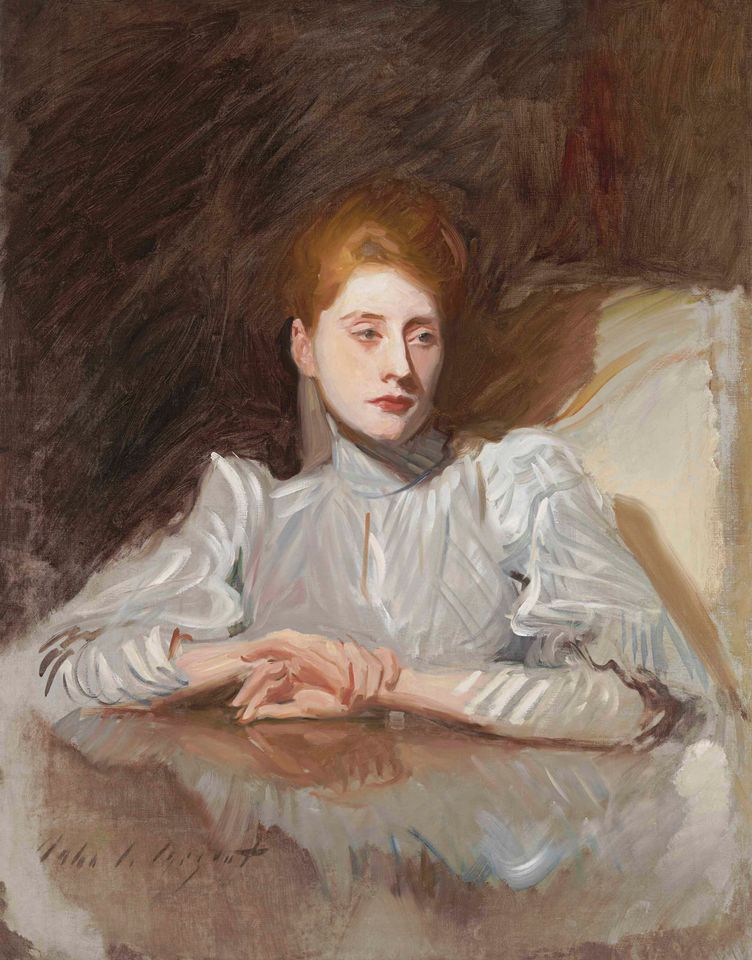