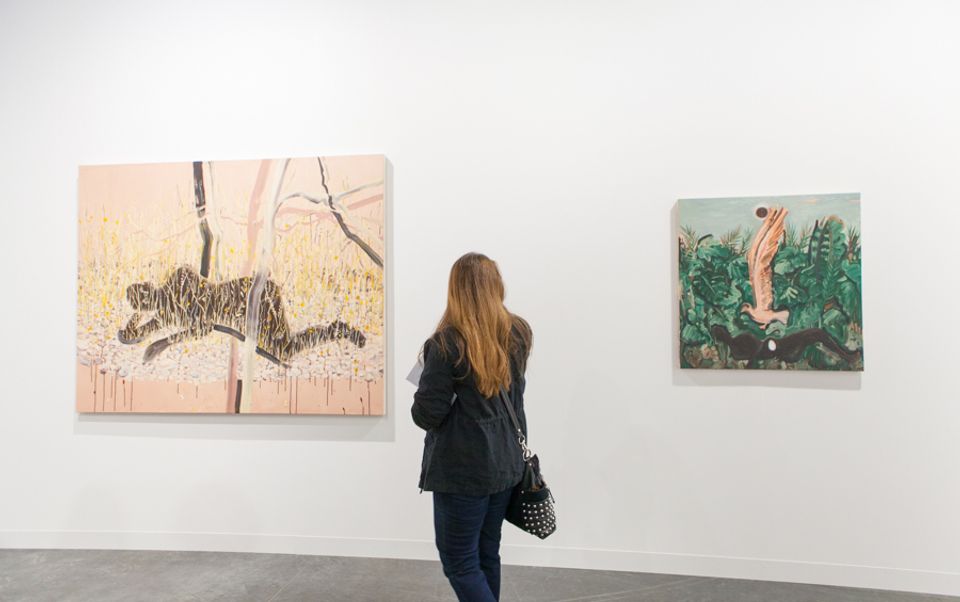 Mendes Wood, based in São Paulo, Brussels and New York, is showing recent paintings by Antonio Obá that respond to the Afro-Brazilian artist’s recent self-imposed exile in Europe and the US Photo: Vanessa Ruiz

Brazilian galleries are the largest delegation of Latin American exhibitors at Art Basel in Miami Beach, accounting for 14 stands—and responses to the country’s recent contentious election of the far-right president Jair Bolsonaro can be felt around the city this week. The former army captain, who takes up office in January, has been dubbed “the Trump of the tropics”, and his controversial views and apparent lack of a cultural policy have caused alarm in Brazil’s art sector.

Mendes Wood, based in São Paulo, Brussels and New York, is showing recent paintings by Antonio Obá that respond to the Afro-Brazilian artist’s recent self-imposed exile in Europe and the US. Obá received hundreds of threatening messages after his 2015 performance Acts of Transfiguration: Disappearance of a Recipe for a Saint, in which he grinds up a statuette of the Virgin Mary and pours it over his naked body, was shared by far-right groups on social media last year. The gallery’s director Renato Silva says that Obá, in the paintings, is “trying to bring back to life the body and the mind that [the far right] stole from him”.

A lot of leftist intellectuals are using their agency in art to express their opposition to the political situation. But who knows for how much longer we’re going to be able to do that? Matthew Wood of Mendes Wood gallery

The artist is now “being sued by the state for public moral indecency and damaging a religious object. Given Bolsonaro’s appointment, we are probably going to have to get him out of the country,” says the gallery’s co-founder Matthew Wood. Mendes Wood is also exhibiting works by Sonia Gomes, the first living Afro-Brazilian woman to have a solo show at a major Brazilian museum (Still I Rise, São Paulo Museum of Art, until 10 March). Wood says: “A lot of leftist intellectuals are using their agency in art to express their opposition to the political situation. But who knows for how much longer we’re going to be able to do that?”

A lot of leftist intellectuals are using their agency in art to express their opposition to the political situation. But who knows for how much longer we’re going to be able to do that?The Brazilian artist Marcius Galan, whose work is on show with Galeria Luisa Strina at the fair, says that although it is too early to know Bolsonaro’s policies, some plans, such as the “end of the ministry of culture” and “the criminalisation of activism”, are worrying. Pointing to the closure of an exhibition dedicated to queer art at the Santander Cultural Center in Porto Alegre in 2017 following protests, Galan says: “I think artists are the biggest risk to an authoritarian system of government, so today, a cruel narrative is being constructed to demoralise artists.”

Bolsonaro’s divisive ascent echoes increasingly polarised politics worldwide, from the election of President Donald Trump in the US to Brexit, the UK’s vote to leave the European Union. “The population was so divided—families were fighting, friendships were being shattered,” says Thiago Gomide, the co-director of Bergamin & Gomide, another São Paulo-based gallery showing at the fair.

Slightly fewer Brazilian galleries are exhibiting in Miami this year, says Ariela Grubert, the production manager at Latitude—Platform for Brazilian Art Galleries Abroad. “In 2017, we supported 16 Brazilian galleries at Art Basel in Miami Beach, but this year we are supporting 11. I think it is because it is election year, there is so much uncertainty,” Grubert says. “Some artists might leave Brazil because of Bolsonaro, but others are thinking ‘this is my country, and I will stay’—there is a sense of resistance.”

Some are taking matters into their own hands; for example, the “collective action” known as Colera Alegria encourages people to share posters and banners on social media to reappropriate “symbols, colours, forms and words misrepresented by right-wing discourses”, using the hashtag #coleraalegria.

Another one of those resisting is the curator Andrea Giunta, recently appointed the chief curator of the Mercosur Biennial in Porto Alegre in 2020, who says she was shocked that a regime “that is igniting and liberating discourses of hate” has been voted in. She is planning a challenging, feminist programme: “In a society in which the social fabric is so wounded and fragmented, it is important for me that the biennial acts as a forum and as a chorus in which different voices can communicate.”

Miami’s institutions are also providing a platform. This week, the Portuguese artist Pedro Neves Marques unveils a new audio-visual work called A Mordida (the bite) at Miami’s Pérez Art Museum Miami. The film, he says, “fictionalises the Zika epidemic through genetically modified mosquitos, creating an eerie mood reflective of the current increase of intolerant conservatism in politics in Brazil, especially with the presidential election of the fascist Jair Bolsonaro”. Although the work is abstract, the artist hopes that it is “very clear about the current militarisation of society”.