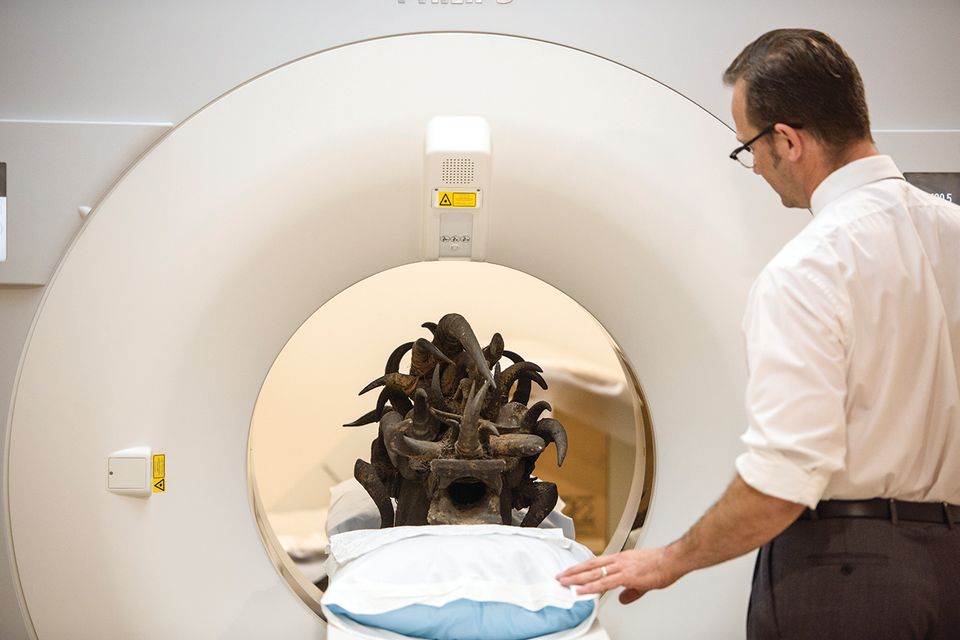 A Senufo helmet mask acquired by the Dallas Museum of Art in 1997 has always had a fearsome quality. Crafted by its West African creator with fierce horns to project power and status, it was no doubt intended to intimidate, according to Roslyn Walker, the museum’s senior curator of the arts of Africa, the Americas and the Pacific.

Yet in the Senufo belief system, it is also what you do not see—the sacrificial objects hidden beneath the surface—that lend the mask its power. For years, those inner ingredients were largely a mystery to Walker and her colleagues.

Now, with the aid of medical imaging and other technologies, those objects have been revealed, and the results have gone on view at the museum in the free exhibition Not Visible to the Naked Eye: Inside a Senufo Helmet Mask.

At the centre of the show is the mask itself, which dates from the mid-20th century and was fabricated and worn by a member of the Senufo people’s male-only Komo association at special ceremonies and secret events. “This is his self-expression, his aesthetics projected for all to see,” Walker says. 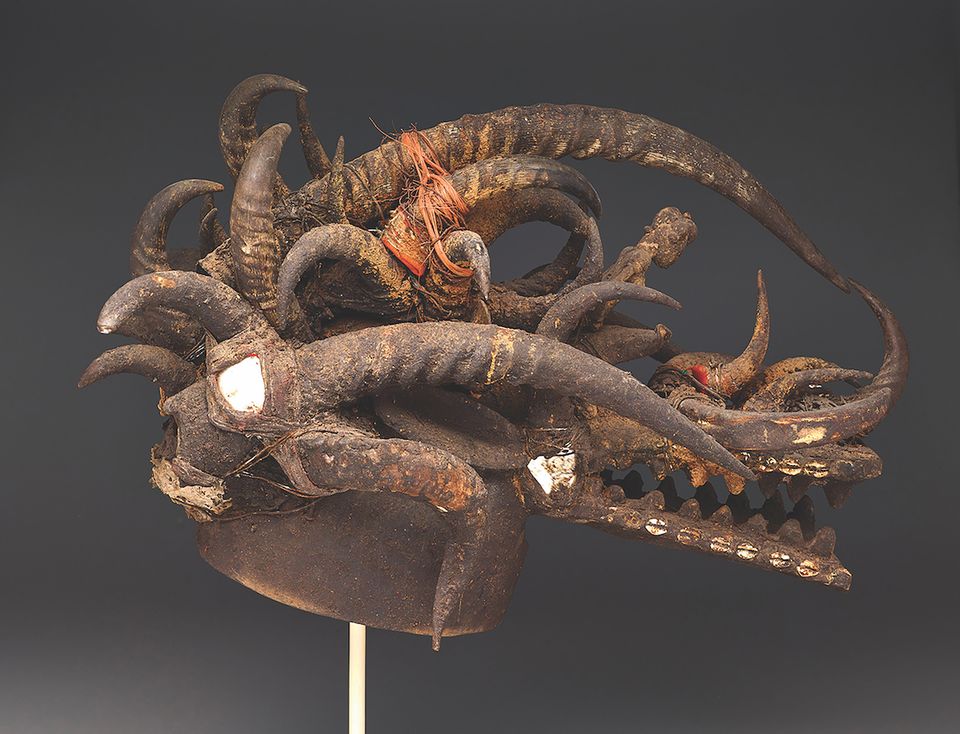 “It’s also about religion and being in contact with the spirit world,” she adds. “It’s a way of communicating with those who have already gone into the beyond—a way of divining, helping people to solve problems in life. So it has an educational function, for the society and for the person who’s wearing it. It’s a symbol of authority.”

The mask was acquired by the museum as a gift and Walker is unsure of the country of origin, although she suspects it to be the Ivory Coast: the Senufo people live in parts of the Ivory Coast, Mali and Burkina Faso. Visible elements on the mask’s surface include reedbuck antelope horns, glass, wood, cowrie shells, metal wire, glass and mirrors. The entire mask is also coated with a darkened liquid that Walker surmises is at least partly millet beer.

The ends of some of the horns were capped by pieces of fabric. “But part of our mantra is to be as non-invasive as possible, so we couldn’t look inside them,” says Fran Baas, the museum’s interim chief conservator. “We do no harm—minimal intervention.”

However, a small loss in the fragile encrusted coating on the mask allowed a glimpse at a folded-up Arabic-language pamphlet in the back of its base. Peering at it, Walker and Baas made out the Arabic word for charity. A Fourier-transform infrared spectroscopy test carried out by a collaborating museum confirmed that the pamphlet was enclosed in a polyethylene plastic wrap. And X-ray fluorescence tests allowed Walker and Baas to identify the composition of the iron-alloy wires that were used to attach the horns. Still, much of the mask’s inner contents remained a mystery.

Serendipity then presented itself during a visit to the museum by medical students from the University of Texas Southwestern Medical Center in Dallas. Intrigued by the mask, the students suggested that Walker and Baas contact the hospital’s radiology department to arrange a spectral imaging CT scan of its layers. 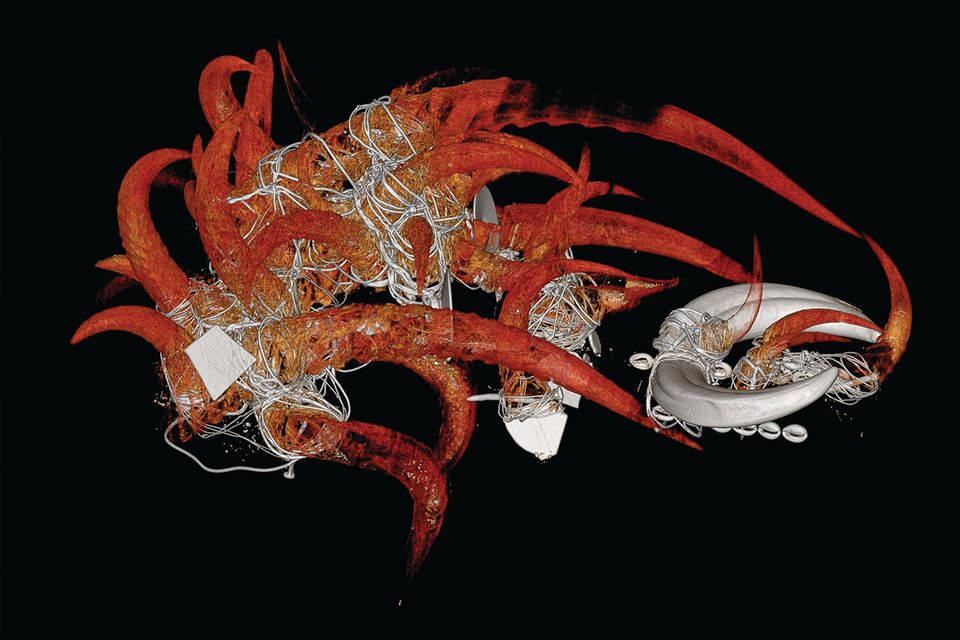 The resulting images revealed that the horns contain seed pods, fabric, gravel and the skeletal remains of what Walker believes is a small Nile monitor lizard. They uncovered tree rings on wood and a wooden female figure with a so-far-unidentified metallic alloy base. They exposed the wires used to attach and support horns and tusks. And they yielded insights into how the mask’s Senufo creator carved and assembled the pieces.

“What’s really wonderful about a spectral CT versus an X-ray or a regular CAT scan is that it’s a very visual form,” Baas says. “You get an image that you can rotate 360 degrees, and the colours change based on the density of the material. It’s turned into a fascinating ride.”

The imaging scans are displayed on touchscreen monitors at the exhibition so that visitors can explore the mask’s components, which include 34 animal horns of different types. (Walker and Baas are consulting with the Dallas Zoo on some horns that they have been unable to identify.)

Now that the museum has identified many of the materials in the mask, the challenge is to understand their significance, Walker says.

“Why this type of antelope? Why the warthog?” she says, referring to the horns on the mask. “There’s still a lot to understand. Animals can be metaphors for something, and that’s what we have to sort out.” Walker and Baas also want to figure out the significance of the seed pods inside the horns.

The Komo association’s all-male identity would make it difficult for a female field researcher to find the answers, they wryly note.

• Not Visible to the Naked Eye: Inside a Senufo Helmet Mask, Dallas Museum of Art, Dallas, until 21 March 2021

about 14 hours ago
Must-see institutional shows during Art Basel

about 15 hours ago
‘We have no doubt NFTs are art’: after selling tokenised Leonardo, Hermitage plans exhibition of born-digital works