Made by the Luritja artist Harold Thomas in 1971, the rights to the flag design are currently held by Ben Wooster, a former art dealer previously fined $2.3m for selling fake Aboriginal works of art 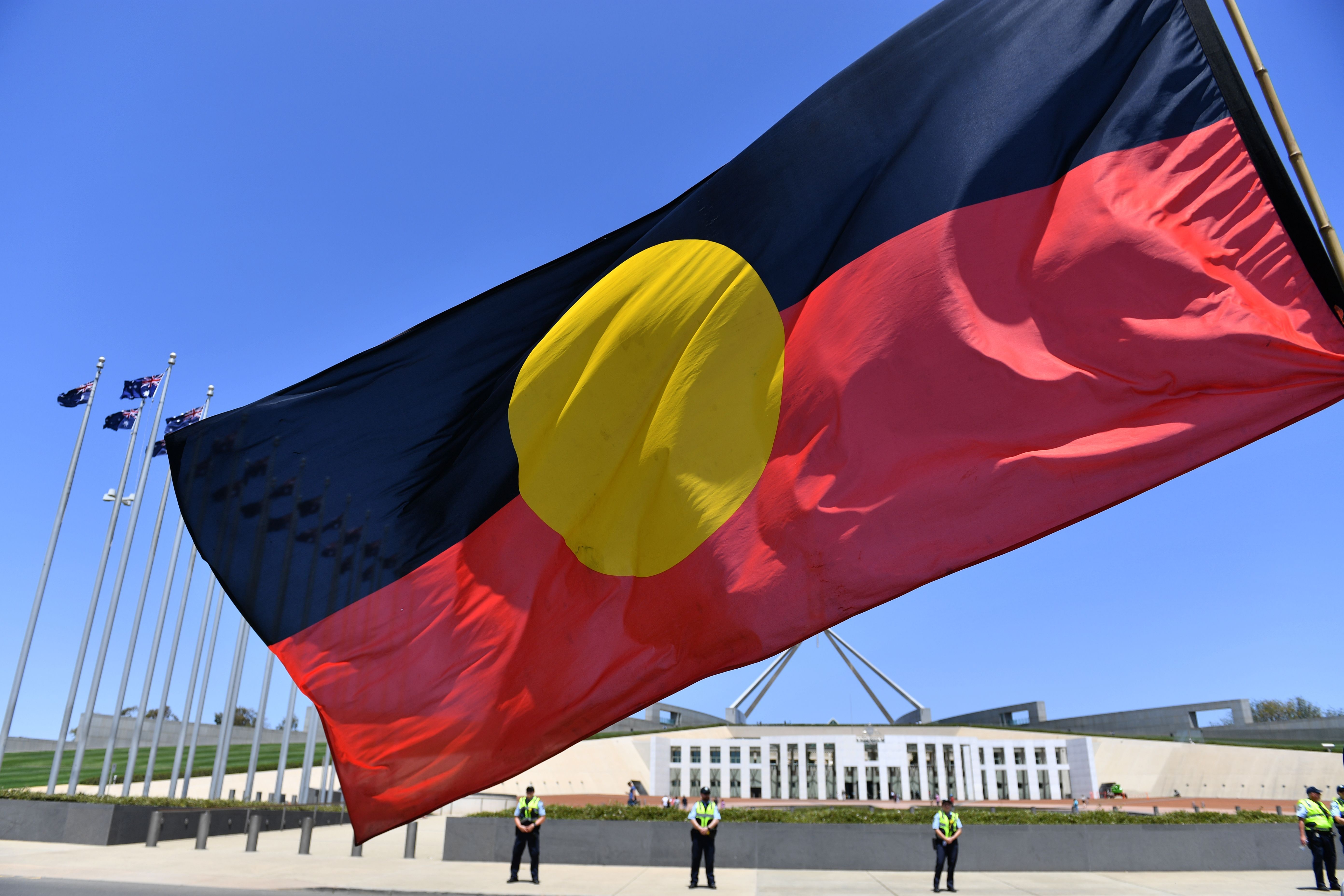 A years-long campaign to “free” the design of the Aboriginal flag has gained federal backing this week as the Australian government begins negotiations with a non-Indigenous clothing company that owns the licensing rights to its design.

The exclusive rights to the reproduction of the Aboriginal flag design have been held by WAM Clothing since 2018, when the Luritja artist Harold Thomas—who produced the design in 1971—granted them to the company. WAM is owned by the former art dealer Ben Wooster, of the dissolved gallery Birubi Art, who was separately fined $2.3m in 2018 by a federal court for selling fake Aboriginal artworks made in Indonesia.

In his first acknowledgement of the case, Wooster confirmed to The Guardian today that WAM’s products bearing the Aboriginal flag were also produced in Indonesia, like the forged Aboriginal objects he was previously convicted of selling. Wooster was summoned to a public federal hearing on Monday in Canberra and negotiations are ongoing.

The federal National Indigenous Australians Agency (NIAA) has also confirmed that talks about acquiring the copyright and licences were ongoing. A spokesman for the organisation tells The Art Newspaper that the “Australian Government, through the NIAA, is seeking to resolve the issues around the Aboriginal flag that will enable the flag to be used more freely and in a way that respects the artist of the flag, respects the legitimate commercial interests and takes into account the broader public interest.”

The #FreeTheFlag movement gained momentum last month after the Australian Football League (AFL) was fined for its use of the Aboriginal flag on uniforms and merchandise sold during this year’s “Indigenous Rounds”, an annual match honouring the late athlete Sir Doug Nicholls, the first Aboriginal person to be knighted.

All 18 football clubs in the AFL have banded together to launch a petition currently signed by nearly 150,000 people in an effort to stand in solidarity with the #FreeTheFlag movement and ensure that the flag should be in the public domain

Additionally, the #FreeTheFlag movement has been widely supported on social media, with many individuals and organisations arguing that a non-Indigenous company—especially one led by someone previously found guilty of producing and selling fake Aboriginal art—should not profit from an Aboriginal symbol.

However, some believe that the movement is a “major misunderstanding” in misstep with authentic Aboriginal culture, and that Thomas is partly to blame for licensing the design. “There’s such a thing as Australian Aboriginal culture and a flag made in 1971 is not our culture,” one Twitter user noted. “The flag is a modern piece of artwork designed by Uncle Harold. It’s not authentic traditional culture, it’s contemporary art.”

The #FreeTheFlag movement is a major misunderstanding. Theres such a thing as Australian Aboriginal Culture & a flag made in 1971 is not our culture. The flag is a modern piece of artwork designed by Uncle Harold. Its not authentic traditional culture its contemporary art #auspol

Thomas has not spoken publicly about his decision to sell the licensing rights to the flag since the #FreeTheFlag movement took hold in recent weeks, but the artist originally licensed the design to Birubi Art in 2015, an agreement that was then transferred to WAM Clothing after the gallery was liquidated and found to have sold more than 18,000 fake Aboriginal paintings, boomerangs, didgeridoos and other objects.

Since 2018, WAM Clothing has issued several cease-and-desist and infringement notices to non-profit Aboriginal organisations and charities, including Spark Health Australia, an Aboriginal health promotion organisation that has launched a petition to lobby government bodies to free the flag for free commercial and non-commercial use. Thomas receives royalties from the licensing agreement.

The black, red and yellow flag was first used in 1971 at a National Aborigines Day march in Adelaide, and was subsequently used in rallies, posters, clothing and in the logos of Aboriginal organisations. It became an official Australian flag in 1995, and in 1997 Thomas was legally recognised as the artist behind its design. Thomas is the sole copyright holder, and the copyright will last for seven decades after his death, according to Australian law.