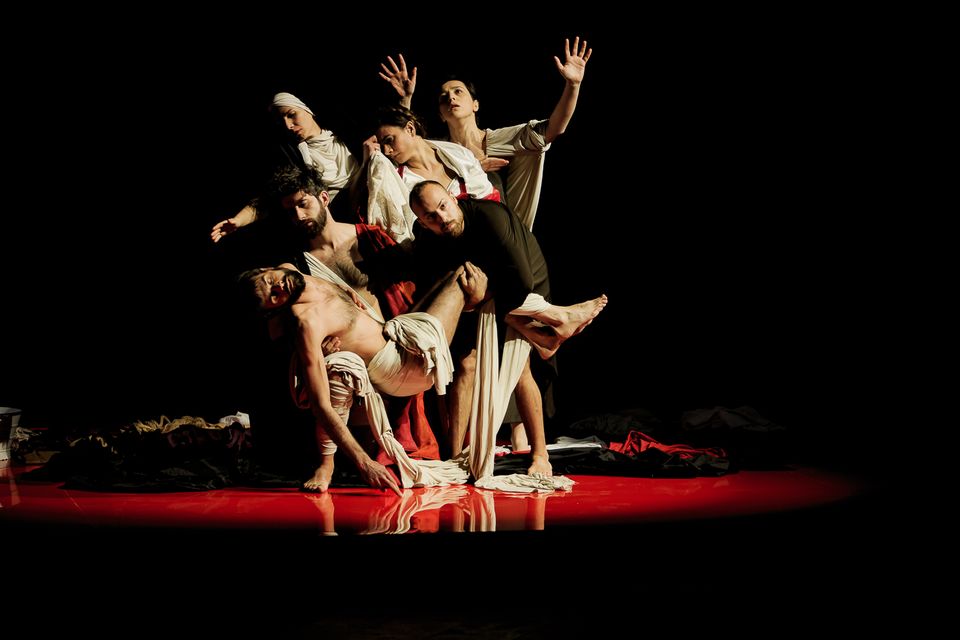 The actors of the Malatheatre performing Caravaggio’s Deposition from the Cross Photo: Dmitry Chuntul

Some young men and women walk unobtrusively onto the stage. They begin to take off clothing, vaguely arrange some drapery, and suddenly, like magic, you are looking at Caravaggio’s Deposition from the Cross, with all its gestural drama and pathos. They hold the tableau-vivant for no more than a minute, and then it dissolves and they recompose themselves as another of the Italian genius’s masterpieces—and another, and another. They are actors of the Malatheatre founded by Ludovica Rambelli, brought all the way from Naples to Moscow for the evening.

For me, this was the high point of the extravagant performance that is the annual The Art Newspaper Russia prizes ceremony, whose seventh edition took place on 1 March in the vast space of Moscow’s 18th-century market, the Gostiny Dvor.

When Inna Bazhenova bought The Art Newspaper and its network of papers in 2013, she decided that artistic effort in Russia, or about Russian art, needed to have a spotlight shone on it, and that the way to do it was to hold a one-night performance—a kind of work of art in its own right—with short, dramatic and musical episodes about each prize. Their creator is Aleksey Agranovich, the actor and director known for movies that include The Humorist and Russkiy Bes.

The linking theme this year was an imaginary journey by a mother, father and daughter, whose living room on stage was created almost entirely by digital wizardry. The tableaux-vivants, for example, took them to Rome because the Book of the Year was Simply Rome: Italian Images XXI by Arkady Ippolitov.

The Museum of the Year was won by the Costakis Collection in the State Museum of Contemporary Art as a part of MOMus in Thessaloniki. George Costakis was a Greek who worked in the Soviet diplomatic world of Moscow from the 1930s onwards, when the Russian Avant-Garde was seriously frowned upon, so he was able to buy from the artists themselves or their families and thus put together the canonical collection for this field, part of which is now in Thessaloniki. Here the skit re-enacted Zorba’s dance from Zorba the Greek.

The prize for Personality of the Year went to Natalia Opaleva, the founder of Moscow's AZ Museum, which holds the work of the Expressionist Anatoly Zverev, a latter-day Holy Fool in the way he lived a sacrificial rebellion against Soviet artistic orthodoxy. This was represented by the encounter between a woman and a mentally ill artist whose works change her life forever.

The Restoration of the Year was for the latest conservation at the palace of Oranienbaum and its park outside St Petersburg, so the little family was transported to the Chinese Palace there and they danced to choreography by Anna Abalikhina—who specialises in dancing to digital settings—with baroque music played by the Soloists of Catherine the Great ensemble.

The final performance was for the Exhibition of the Year. By now the little family is planning to move out and the mother recites a monologue down the telephone: “Not everyone will be taken into the future”, which is the title of the winner, a show by Ilya and Emilya Kabakov, a co-production between Tate Modern, the State Hermitage Museum and the State Tretyakov Gallery. Music for this performance was found by the director accidentally when he typed “Kabakov music” into the search engine. Meanwhile, the house manager in the performance installs a ladder and climbs up it to turn off the speaker; the end—until another year.

The prize winners are chosen by the staff of The Art Newspaper Russia and honorands receive a white table sculpture by the artist Sergey Shekhovtsov, made up of the towers of Big Ben and the Kremlin, set at a ten-to-two o’clock angle.

The main sponsor of the prize-giving, which included a slap-up party, was the jewellery company Mercury.