Case against Filipino artist who protested in support of reproductive rights in Manila Cathedral, continues as solicitor general asks court to reconsider 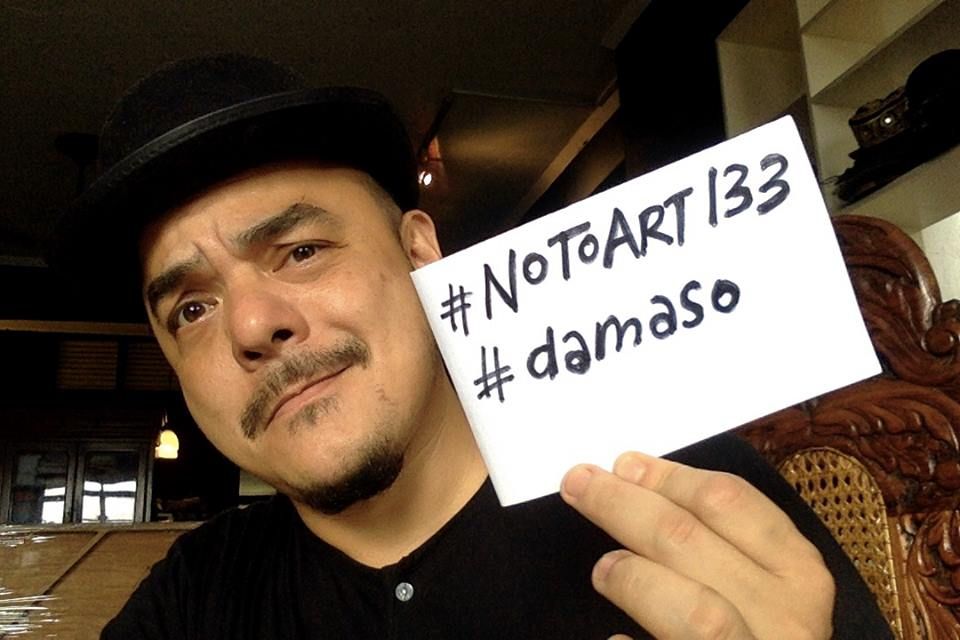 The pendulum keeps swinging for the case of the Filipino activist artist and organiser Carlos Celdran, who was convicted for “offending religious feelings” for a 2010 protest in support of reproductive rights. A ruling on 1 August by the Philippines Supreme Court upheld a 2013 conviction by the Metropolitan Trial Court of Manila for violating Article 133 of the Revised Penal Code, which entails a sentence of up to 13 months. But on 15 August Celdran received the backing of the Solicitor General Jose Calida, whose office petitioned the Supreme Court to reverse the conviction as lacking “enough factual basis” and to declare Article 133 unconstitutional, reports ABS-CBN News.

"A petition has been filed hoping for an en banc" – in which "all Supreme Court justices meet in a forum to discuss merits and constitutionality of the law," Celdran tells The Art Newspaper. "But judging that the last verdict was only four pages long, they seem set in upholding the sentence." He describes the country's top court as "in shambles -- our president is doing a smashing job in destabilising the Supreme Court. He kicked out the last Supreme Court justice [Maria Lordes] Sereno and has placed his own lackey [Teresita] De Castro in her place."

General pressure upon the arts has purportedly increased since the 2016 election of strongman president Rodrigo Duterte, but differently from the country's longstanding religious taboos. "Actually, Duterte cursed the Church and called God, 'stupid', so the Church is actually under attack. Duterte is very much against the Catholic Church of the Philippines," says Celdran. " His opposition to the Church may seem like a hopeful move but it doesn’t change the fact that 20,000 people have been killed in the current drug war. It's become such that its only okay to talk badly about Duterte’s opposition and his critics." However, Celdran says, "the art world is still below the radar for this president now. For now."

Celdran, a political cartoonist turned performance artist and cultural organiser, staged the protest on 30 September 2010 during a ecumenical meeting in the Manila Cathedral, a landmark of Manila’s historic downtown Intramuros. Celdran dressed as Filipino national father José Rizal and held a sign saying “Demaso”, the name of a corrupt friar in Rizal’s 1887 novel Noli Me Tángere. The protest targeted church opposition to a controversial reproductive health bill, the Responsible Parenthood and Reproductive Health Act, which passed in 2012 and guaranteed a universal right to contraception, fertility treatment, sexual education and maternal care.

Celdran leads tours of and advocates for the preservation of the Intramuros area, built in Spanish style and heavily damaged in the 1945 Battle of Manila. Earlier this year Celdran was a driving force behind and the performance art programming director of the inaugural Manila Biennale (3 February to 5 March), which was organised by Alice Sarmiento, Ringo Bunoan, Cocoy Lumbao and Con Cabrera and held in sites around Intramuros. He says the biennale will "definitely" continue, regardless of his own situation: "[We] don't what the shape or form it’s going to take. It may be simpler. It may be grander depending on how the wind blows."

A Change.org petition to the Philippines legislature to repeal Article 133 has been started by Ryan “Red” Tani, the founder of the secularism and free speech advocacy group Filipino Freethinkers. The organisation, which has a history of protesting religion-based censorship of the arts, also staged a rally outside of the Supreme Court.

Celdren says that no legislative efforts have been taken so far to remove Article 133 from the penal code, and he remains pessimistic about his appeal's prospects. "Yes. I’m confident that the Supreme Court will uphold my sentence until the end. The SC ignored the last Solicitor General’s recommendation during the last administration, nothing assures me that they will listen to same advice from the current one. My sentence was upheld 99% of the journey, I’d be foolish to think the last 1% would change course."

"Slippery slopes are closer than you think," he continues. "What is under attack here is freedom of expression, the very foundation of all art. Censorship should never become the norm and we should never desensitise ourselves from these violations of our rights no matter how distant it may seem. The world has become a small place. Now more than ever before. Today, you read about it in Southeast Asia. Tomorrow, it could be next door to you in Europe."

UPDATE: This article was updated on 3 September to include new comments from Carlos Celdran