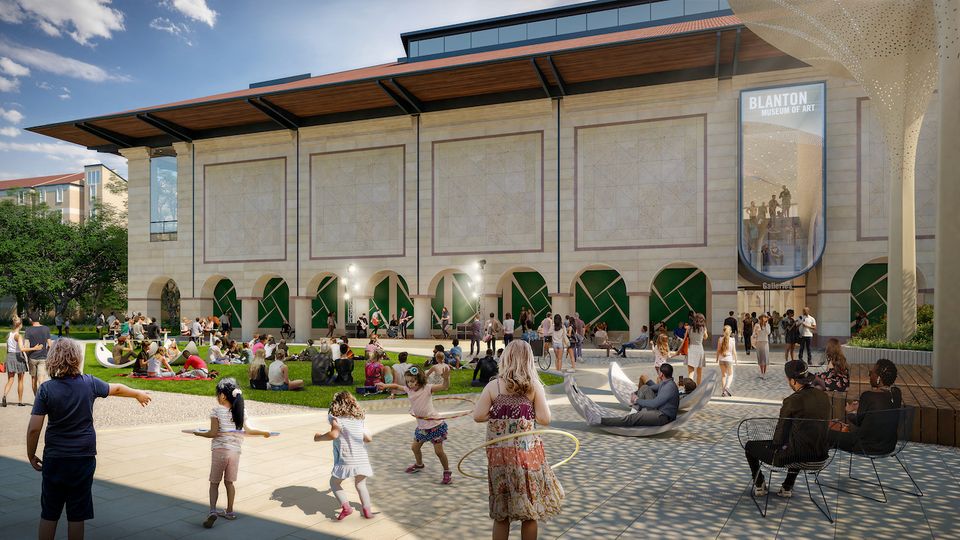 Rendering of the view from Martin Luther King, Jr. Boulevard looking northeast toward the Faulkner Gateway, showing the museum café outdoor seating at left and Carmen Herrera's mural on the right Courtesy Blanton Museum of Art, the University of Texas at Austin

The Blanton Museum of Art in Austin, Texas, will unveil a monumental mural by the 105-year-old Cuban-American artist Carmen Herrera as part of a $35m redesign of its campus at the University of Texas.

The mural is inspired by the hard-edge painter’s 1956 painting Green and White, which featured in Herrera’s long-overdue retrospective Lines of Sight at the Whitney Museum of American Art in 2016. The painting marked a “period of intense experimentation as Herrera developed her signature style”, says the museum’s director, Simone Wicha.

The New York-based painter, whose career has been revalued in recent years as the art world increasingly seeks to champion the work of overlooked women and BIPOC artists, says she has long “admired and respected” the Blanton for their efforts in supporting Latin American art and their holdings of more 2,000 Latin American artworks.

The museum is the “perfect place” to celebrate the legacy of the artist, and will “forever commemorate a painter who revolutionised the practice of Geometric Abstraction in Havana, New York, and beyond—albeit quietly—for decades”, Wicha says. “Her bold geometries will [also] add dynamism to the space, enlivening it with bright colour and rhythmic forms.”

The commission follows the debut of Herrera’s first public artworks last year in New York’s City Hall Park, which were shown in an exhibition commissioned by the Public Art Fund that also aimed to illuminate the artist’s little-known background in architecture, consisting of several monochromatic aluminum sculptures called Estructuras Monumentales.

The renovation, which is being spearheaded by the international design firm Snøhetta, will also include an expansive outdoor gathering space between the two main buildings featuring petal-shaped structures that will aim to emphasise views of both Austin and the nearby Texas State Capitol.

The museum plans to remain open throughout construction, which is slated to start early this year and conclude by late 2022 if there are no disruptions due to the coronavirus pandemic. Organisers have raised $33.1m of the $35m goal with significant donations from the Moody Foundation, the Still Water Foundation and other donors.