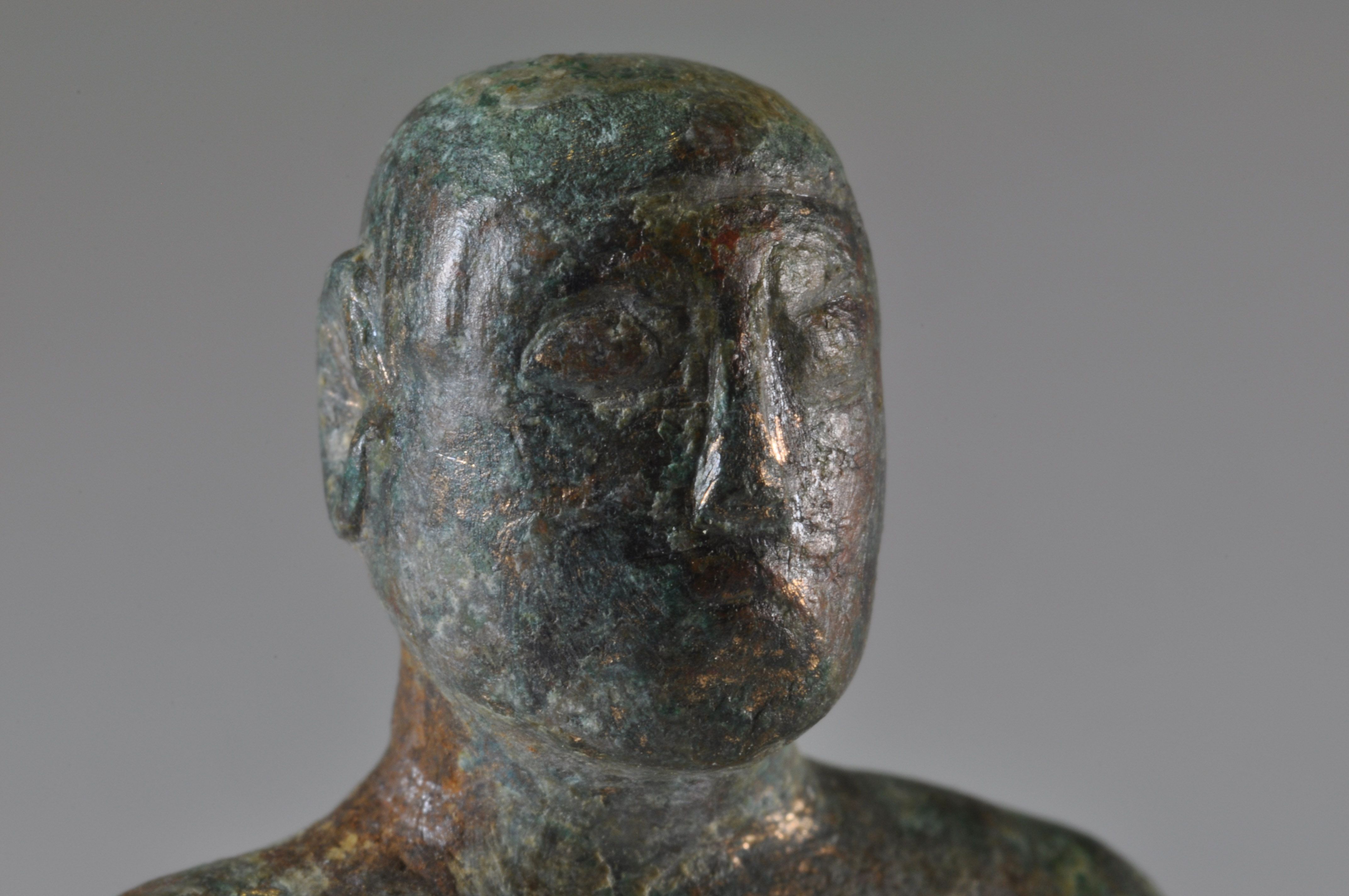 A tiny figure excavated in Cambridgeshire is believed to be a Celtic deity sporting a very rare depiction of smart hair for an Iron Age British chap—admirably neatly clipped moustache and fringe, slightly longer but still immaculately combed at the back.

The little copper alloy figure, barely two inches tall, was found with a wealth of other domestic material at the National Trust’s Wimpole Estate in Cambridgeshire, a site which has been continuously occupied and farmed for more than 2,000 years. When excavated in 2018 he was just a featureless lump of clay and corrosion, but careful cleaning has revealed remarkable detail, including the torc neck collar he holds, and his impeccable hair.

Julius Caesar described the appearance of the male Britons—adding that they were "frightful" in battle when painted with blue woad: “they permit their hair to grow long, shaving all parts of the body except the head and the upper lip”. Business in the front, party in the back © National Trust, Oxford Archaeology East, James Fairbairn

While archaeologists believe the Cambridgeshire figure’s hair could just be a convention for portraying the deity—possibly the fertility god Cernunos, appropriate for an agricultural site—it may be a rare representation of everyday fashions of his time, around the first century AD.

Shannon Hogan, National Trust Archaeologist for the East of England, described the figure as an exceptional find. “We have extremely limited knowledge of what ordinary people of England at that time looked like, so this beautifully detailed figure might just be giving us a tantalising glimpse into their appearance, or how they imagined their gods.”

Hogan said he could even be of Roman manufacture but had very Celtic features including the oval eyes, and the torc which may originally have had a decorative inlay in the central recess. The Romans typically adopted and Romanised local deities wherever they settled. Wimpole, which as well as a country mansion still has a working farm including some buildings designed by the renowned architect John Soane, has been continuously inhabited and farmed for millennia. The excavation by National Trust archaeologists and a team from Oxford Archaeology East, in advance of building a new visitor centre, uncovered an extensive settlement with changing land use over a few centuries from livestock to ditched enclosure to Roman arable fields. It revealed extensive trading links, with imported pottery and hundreds of metal objects including brooches, horse harness, coins, Roman military fittings, an axe head, and iron nails.

The little figurine has scars at the back showing where it broke off some implement, probably the handle of a spatula, which Chris Thatcher of Oxford Archaeology East also thought significant. 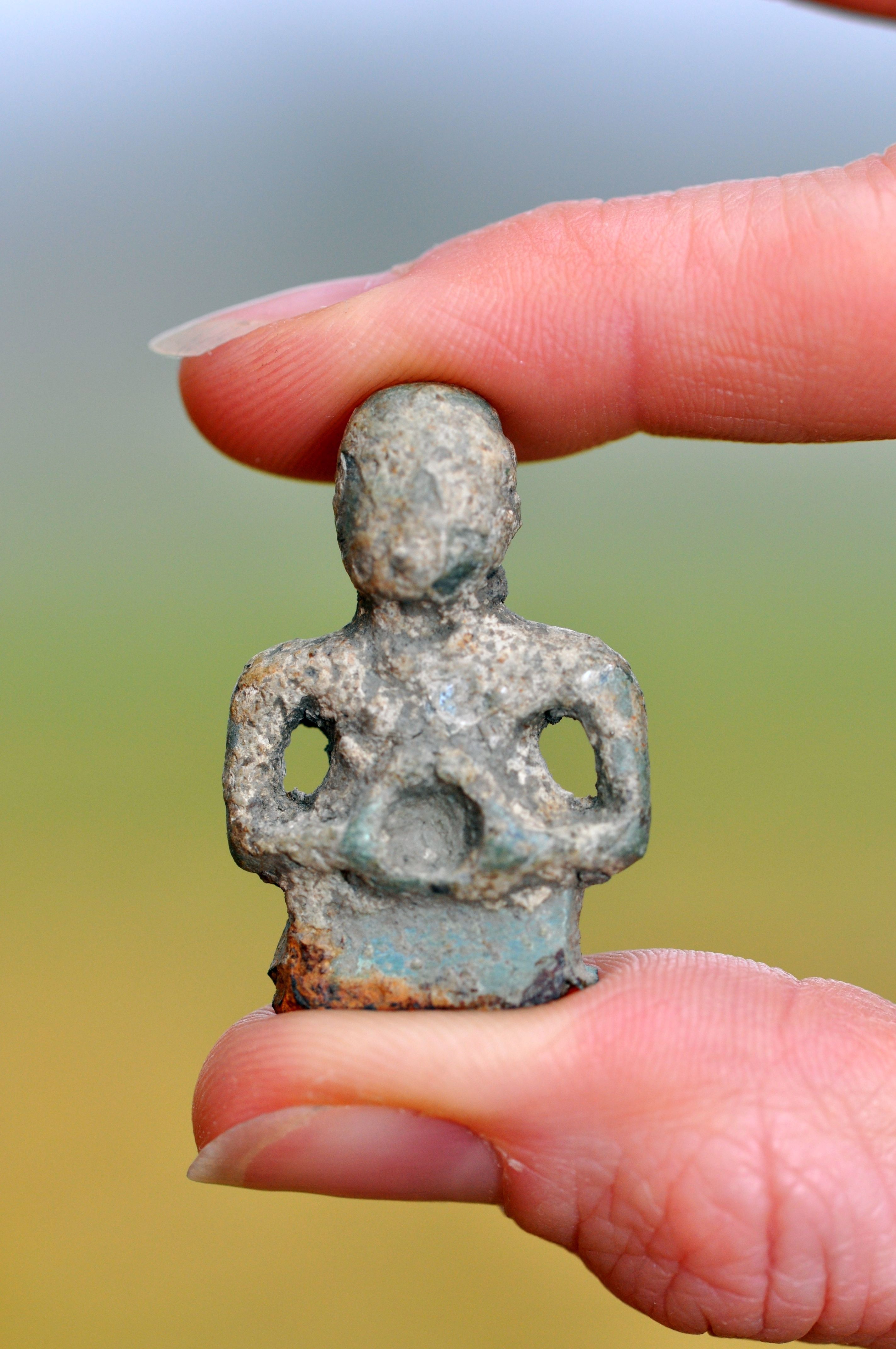 “Finds such as this give a rare and fascinating insight into aesthetics and symbolism in the latest Iron Age. The extent to which his hairstyle is typical of contemporary styles will never be known for certain. However, we think the combination of him holding a torc—associated with status—and forming the handle of a spatula—either used to mix medicines, or wax for writing tablets—speak of influence and power. The fact that he was found on a site with so much other evidence for it being a local hub is wonderful and appropriate.”

There are no immediate plans to place the figure on public display.