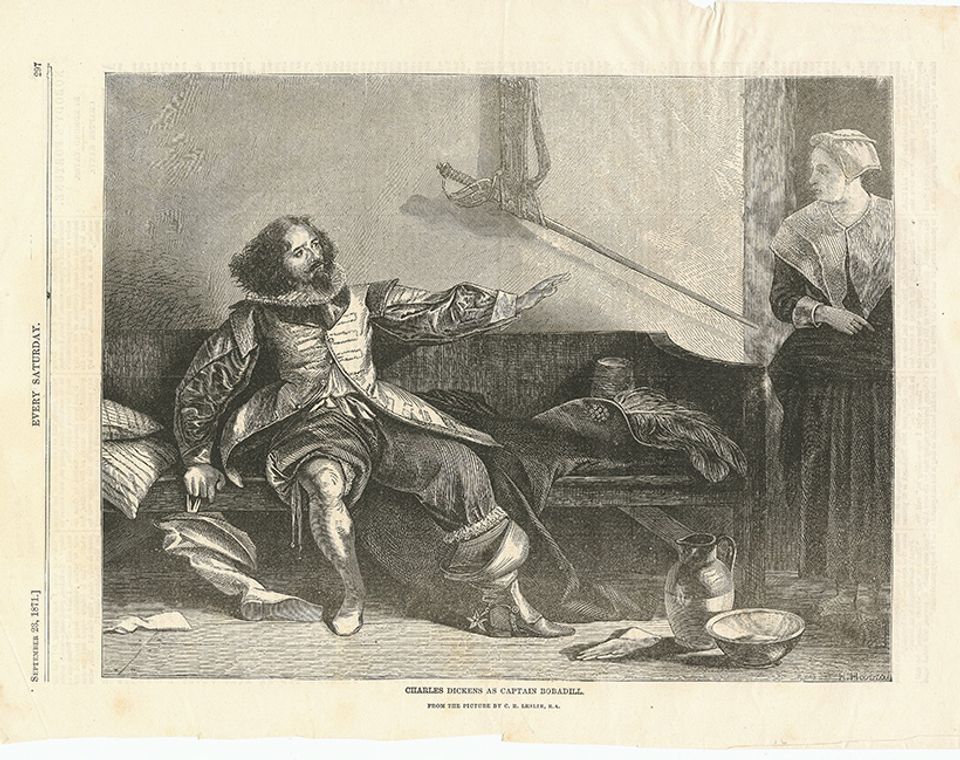 Charles Dickens had a neat ankle, a well-turned calf and deplorably flashy clothes that were the despair of his friends. His style, and his stockings, are being explored in a research project at the Charles Dickens Museum in his old home in Doughty Street, London.

Caroline Fox, the sister of the Whig politician Lord Holland, met the 27-year-old author in 1839 and wrote that she liked everything about him “but the intolerable dandyism of his dress... it will probably wear away with his youth”.

It never did. Years later he was writing to his friend the actor William Charles Macready, begging to borrow a particularly fancy waistcoat so his tailor could copy the “remarkable and precious Waistcoat wherein certain broad stripes of blue or purple disported themselves as by a combination of extraordinary circumstances”. Dickens wanted the new garment to wear to a wedding “as an example of my tastes and wishes” and to “ha ha ha ha!—eclipse the Bridegroom”.

Frankie Kubicki, the curator of special projects at the Charles Dickens Museum, is working with the costume historian Miriam Phelan on conserving the only surviving pairs of the writer’s stockings, which will go on display for the first time next month, cleaned very carefully to preserve the sweat stains and presumably his DNA.

They are also trawling the archives for evidence of his singular taste, and working on other textiles, including the fabulously expensive silk programmes he had printed for the private theatrical performances into which he conscripted his entire family and many friends.

“It was obviously an important aspect of his character, which many people commented on in his lifetime, but which has been curiously little studied,” Kubicki said. She believes Dickens was influenced by his father, perpetually debt-ridden but a noted stylish dresser. The project has won an archive and conservation grant from the Textile Society.

Dickens’s appearance became gaudier as he started to earn serious money on his way to becoming a bestselling author, and he clearly struck many as painfully nouveau riche. He wrote of the children at a charity school laughing at his “white trousers and very bright boots”, and a fellow journalist, Charles Mackay, recalled “a profusion of brown hair, a bright eye, and a hearty manner—rather inclined to what was once called ‘dandyism’ in his attire, and to a rather exuberant display of jewellery on his vest and on his fingers”.

Disappointingly, his only surviving suit is sober in the extreme, a dark navy court suit made only a few months before his death in 1870, for his presentation to the Prince of Wales. Kubicki thinks it survived because it was never worn again. It was passed down through his family and donated to the museum in 2013.

Two pairs of silk stockings, one black and one white, came with the suit, but only the black had been worn. Kubicki was struck, given that the stockings were presumably put on only once like the suit, by how heavily worn they are. She notes that when Dickens was giving the famous public readings of his works that left him so exhausted he was warned they could kill him; his shirts became so soaked in sweat that he had to order more to be made.

“He was a restless soul, full of nervous energy which all his friends remarked on,” she says. “I think we see this in these stockings; he was probably pacing about and sweating with anxiety. There is something rather touching about them.”

The stockings will go on display with other newly conserved textiles previously judged too fragile to display.