At the beginning of Christie's livestreamed 20th-century global relay sale yesterday, a slick introductory video drew similarities between its two host cities: Hong Kong and New York. Yet by the auction's end, it was their differences that were most evident—this was, to use the football cliche, a game of two halves.

Concluding a drawn out 20th-century autumn auction season, the sale consisted of 49 lots, featuring very few blockbusters but plenty of reliable names. Thankfully for viewers, it was pared down from Christie's first foray into "bricks-and-clicks" this July that sold 80 works across four cities.

Overall, 90% of the lots were sold and the sale achieved a decent $119.2m (with fees) against a low estimate of $94.9m (calculated without fees). As with other recent hybrid sales, a sizeable number of guarantees sured up today's offerings—42% (38% in Hong Kong, and 45% in New York) of all lots were effectively pre-sold, over 75% of which were to third parties. Notably, however, there were no withdrawals. 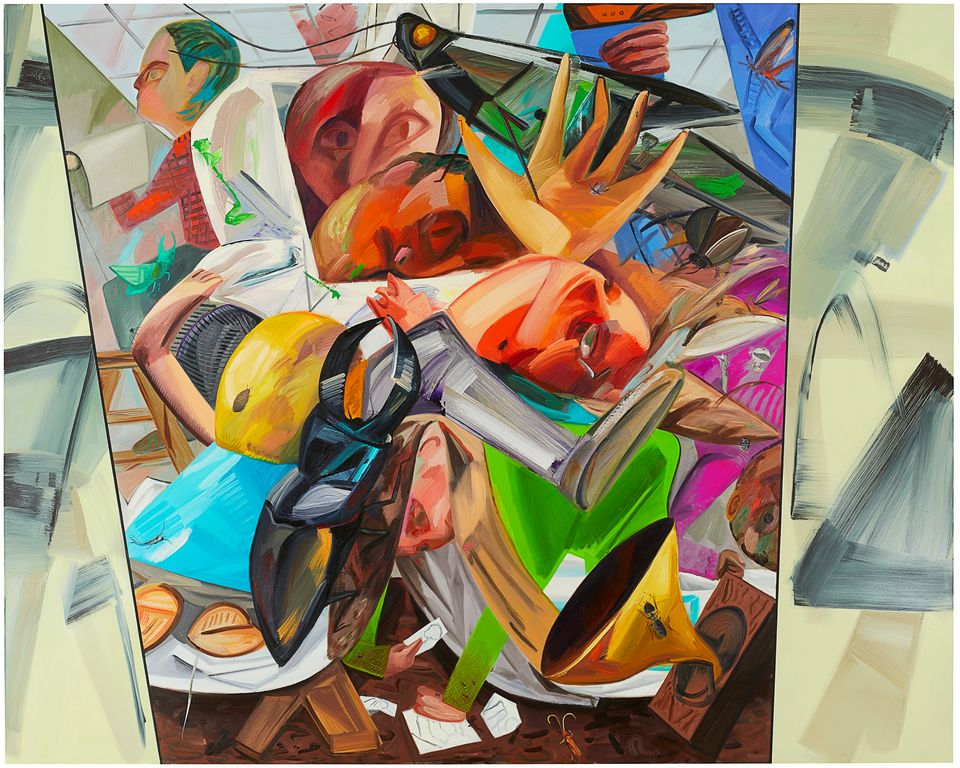 The strategy of packing the opening Hong Kong section with fresh works by younger, currently sought after Western artists in Asia paid off—100% sold, accounting for 44% of the whole sale total. A whopping six out of 18 in Hong Kong lots made records for their artists—the majority of whom were born after 1970. Four of these were achieved within the first seven lots, setting up an energy that might be described as palpable save for the screens and the occasional lost-in-digital-translation moment between Elaine Kwok and the team of masked specialists in New York.

First out the gate, the 39-year-old US painter Shara Hughes secured her highest auction price for High Waters (2016) that sold for HK$4.1m ($532,000) via telephone with Jacky Ho, a vice president at Christie’s Hong Kong. Straight after, Amafao Boako's perilously hot market got even hotter as his 2019 finger-painted portrait Baba Diop hammered for $HK7.2m ($929,000) following nearly five minutes of sustained bidding, eventually going to the same buyer as the Hughes. Boako's previous record auction record of £675,000 ($880,971) was made just earlier this year at Phillips in London.

Fellow auction flipper favourite Nicolas Party also made his best price following a battle between an online bidder from Texas and a Hong Kong specialist, who secured the work for US$1.35m (with fees). And proving that being cancelled is not just a temporary title, but a potentially lucrative one too, Dana Schutz's painting Elevator (2016), which was featured in the 2017 Whitney Biennial alongside her now infamous work Open Casket, captured the attention of at least four bidders. Over five minutes, offers from New York and Hong Kong drove the work past its high estimate of US$2.6m until it was claimed by a Hong Kong collector at US$6.4m (with fees), nearly triple Schutz's previous record made at Sotheby's in New York last year. 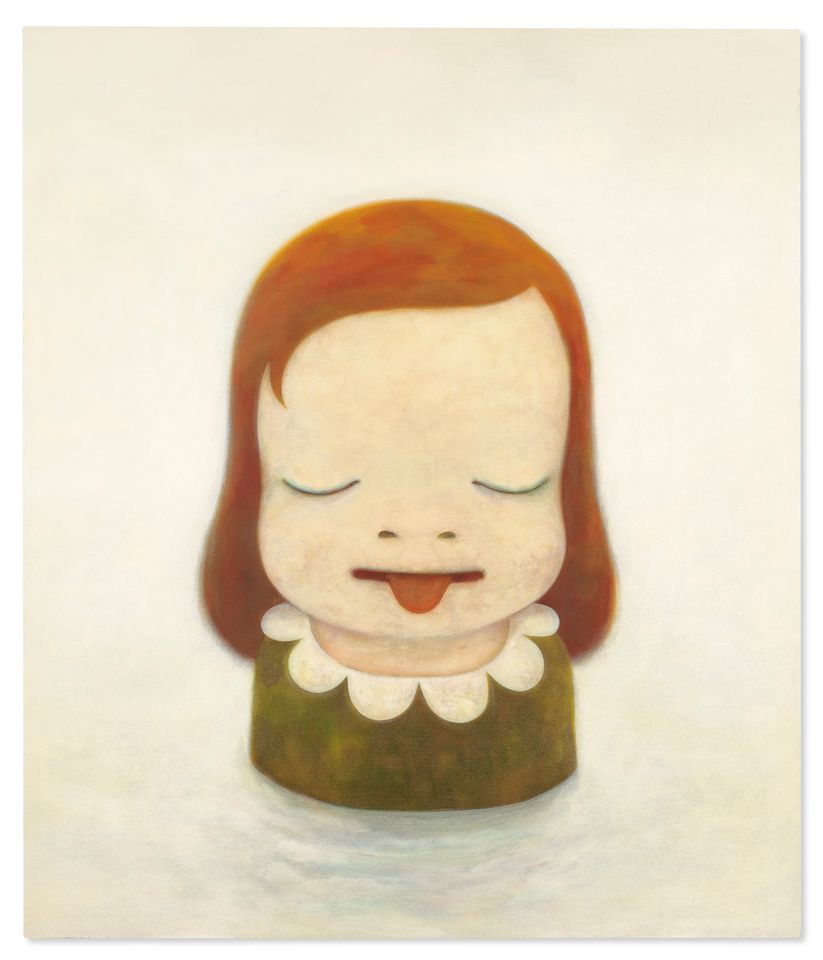 Paintings by Joyce Pensato and Georges Mathieu also made auction records for their artists at US$291,590 and US$2.2m respectively, although the Mathieu barely scraped past its low estimate, securing the artist's new record with just a single bid from the work's third-party guarantor. Notably, several winning bids in Hong Kong were made in person, a stark difference to the scene in New York. Indeed, over half of tonight's buyers came from the Asia Pacific region, with a third from the Americas.

Claiming the top prize from the Hong Kong leg was Japanese auction favourite Yoshitomo Nara, whose 2009 painting Agent Orange (In the Milky Lake) sold for US$8.55m (with fees), at the upper end of its $6.5m-$9m estimate. These strong Asian sales come just hours after a Hong Kong contemporary and Modern sale that amassed US$132m, including US$21.9m for a single lot sale of the 20th-century Chinese-French painter Sanyu's Goldfish (around 1940). 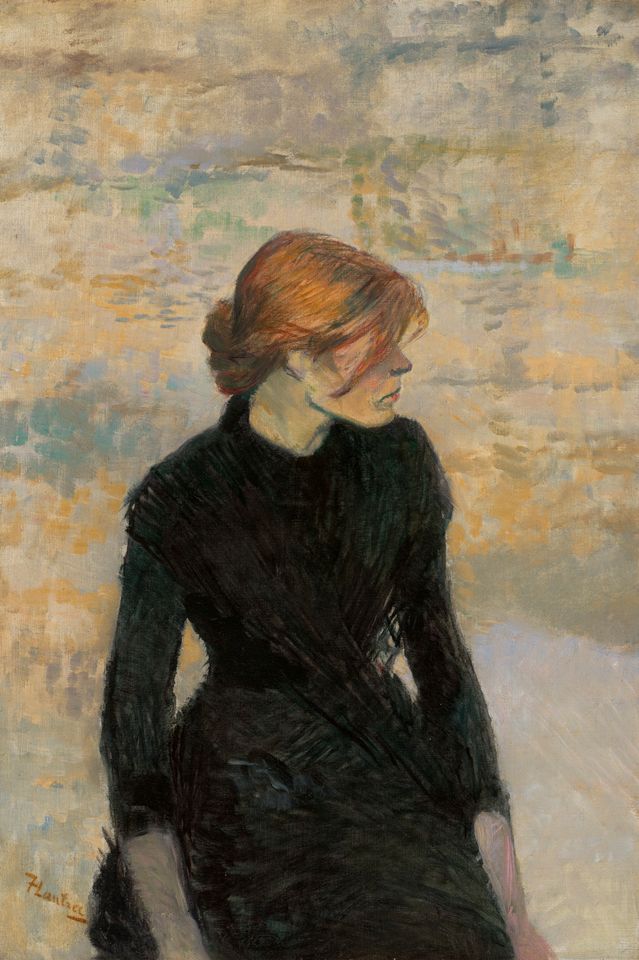 However, when the gavel was handed over to Adrien Meyer in New York, energy flagged for the remaining 31 lots. These works, mainly from the Impressionist and Modern periods, were "exceptionally palatable, within a certain price point, and represented well on screen for those who couldn’t come in to the exhibitions," Johanna Flaum, Christie's head of post-war and contemporary art, told The Art Newspaper.

Several dependable mid-century stalwarts attracted little attention—with works such as Jean Dubuffet's Le Président (1945) and a Campbell soup can painting by Warhol going for well under their low estimates.

Most of the action within the New York leg was concentrated around the sale's top lot—a fresh to auction Henri de Toulouse-Lautrec painting from the collection of Mrs Henry Ford II, which zoomed past its $3m-$5m estimate to hammer for $7.6m ($9.1m with fees), the result of an eight minute bidding war between at least seven parties.

Five lots failed to sell, including a 1972 Calder mobile, a Liechtenstein lamp and a 1946-7 Jackson Pollock painting with a low estimate of $2.5m that was guaranteed in-house.

"Psychologically the market is still a bit more cautious than it was before Covid-19. We designed this sale with this understanding firmly in place," Flaum says. With cautious bidding punctuating much of its second half, the sale attests to both an uneven global economic recovery and a softening of the market for accepted Impressionist and Modern names as speculation on a new line-up of auction favourites gets ever hotter.