‘Commerce is in. If real estate is booming, art is booming’

Property tycoon Aby Rosen, promoting his new Manhattan skyscraper, talks about art-world fatigue and giving something back to society

The real estate mogul Aby Rosen resembles a Germanic, art-collecting putti with obscenely blue eyes and the kind of outspoken confidence that comes from a lifetime spent hustling to accumulate wealth.

Rosen is promoting 94 luxury apartments in a new building, 100 East 53rd, that his company, RFR Holding, plans to sell for more than $4,000 per sq. ft, according to property blog The Real Deal. (Rosen’s press spokeswoman says pricing has not yet been set.)

Norman Foster has designed the 63-storey tower. “When I took Norman to the site in 2006, he took out a sketchbook and within ten minutes knew exactly what he wanted to do,” Rosen says, repeating a sound bite familiar from other interviews he has given. Foster has conceived of an undulating white foil to the neighbouring Seagram Building, the dark bronze skyscraper designed by the architect Mies van der Rohe in the 1950s. (RFR also owns the Seagram, and was recently denied permission to revamp the landmarked Four Seasons restaurant within it.)

The son of Holocaust survivors, Rosen moved to the US in 1987, apprenticing with a brokerage firm before setting up RFR in 1991 with childhood friend Michael Fuchs. Together, the two men have built an enviable property portfolio and Rosen, who has amassed a vast art collection, says he now wants to give a little time and money back.

The brash capitalism of the US suits Rosen. “Commerce is in,” he says. “If real estate is booming, art is booming. If you have a great apartment, you need great art.” The worlds of architecture, art and fashion are “all melting together into one happy family. There’s so much money out there and people want to have a good time. What else are they going to do with their cash?”

Although Rosen and Fuchs found initial success by seeking investment and collateral in their native Germany, they are now looking East. One of China’s largest real estate companies, Vanke, is a co-owner of 100 East 53rd. This is a larger trend: more than $5bn was spent by rich Chinese investors on New York property between early 2013 and December 2014—up from less than $300m in 2012—according to the Wall Street Journal. “There are so many billionaires created there on a monthly basis who are smart enough to know that taking money out of China is already profit in itself,” Rosen says.

There are “hundreds and hundreds, thousands and thousands” of foreign investors wanting to spend their money in the US, he says. “There’s been a flight from South America, from Russians who want to take their money out of the country—the rouble’s collapse didn’t help lately but there is still enough money. There are Indians, Malaysians and Old Europeans, including Jews leaving France. Qatar is coming, Abu Dhabi is coming, Egyptians, people who made money in Africa. Lots of wealthy independent people are looking at America for second or third homes—and the US is far more welcoming now to foreigners than it ever has been.”

Rosen himself keeps 70% of his assets “in real estate, probably 20% in liquid conservative stuff and 10% in art”, he says. “In the real-estate business, what I do takes three, maybe ten or more years to get somewh ere. I have the stamina and patience for that.” In contrast, “with art, it’s easy. You buy something on Monday, hang it on Tuesday and can sell it on Wednesday—the quick fix is always there. I can love something, fall out of love three months later, and it’s out the door. I don’t have this need to own everything.”

The art world has changed, says Rosen, whose posture is true alpha male. Throughout our interview, he pushes a lever on his chair to alternate between leaning forwards or reclining, arms stretched behind his head, one leg crossed over the opposite knee.

“The art world’s become so crowded and repetitive. There’s a bit of fatigue to all the activity. If I see one more VIP pass, I’m going to toss it in the garbage,” he says. “It’s the same with birthdays. If you had seven birthdays a year, you’d wonder what the point in having another birthday would be. You need the wow factor.”

Together with the private dealer and collector Alberto Mugrabi, Rosen formed the Lever House Art Collection in 2003. They have been staging regular shows in the lobby of the Lever House, the Gordon Bunshaft building which was completed in 1952 and refurbished by RFR in 1998. The programme is on hold following the death of the curator Richard Marshall in 2014. “We might change our focus a little bit,” Rosen says. “We’re thinking about interesting commissions we could give out, and it might be architecture. Maybe we start with something small and let it grow organically.”

Mugrabi and Rosen met at a dinner hosted by the media mogul and art collector Peter Brant more than a decade ago. “We got talking and realised we didn’t care about any of the other people there, so we went downtown and had a good time,” Rosen says.

Mugrabi, Rosen and Brant are known for taking positions in artists’ markets. “I buy ten, maybe 20 [works] of some artists,” says Rosen, who is looking at both young and established names. “If there’s a good Warhol, I’ll buy it. But there’s only so much money you can put into art, no matter how rich you are. Some stuff is prohibitively expensive.”

He has a personal art collection of around 800 works. “I put it in all my buildings, I put it in hotels. It’s everywhere. We use it to showcase our properties. Tenants buy some of the art that is in the lobbies.” Art is an essential marketing tool for Rosen. “We can change the theme of an apartment in 24 hours. We like to create real-life environments. One unit had a cat living there.” A well-outfitted apartment makes buyers think ‘I can see myself living here’, he says. “At some point they forget where the hell they are, and they’re looking at a lamp rather than the square footage—you’ve got to play it up.” 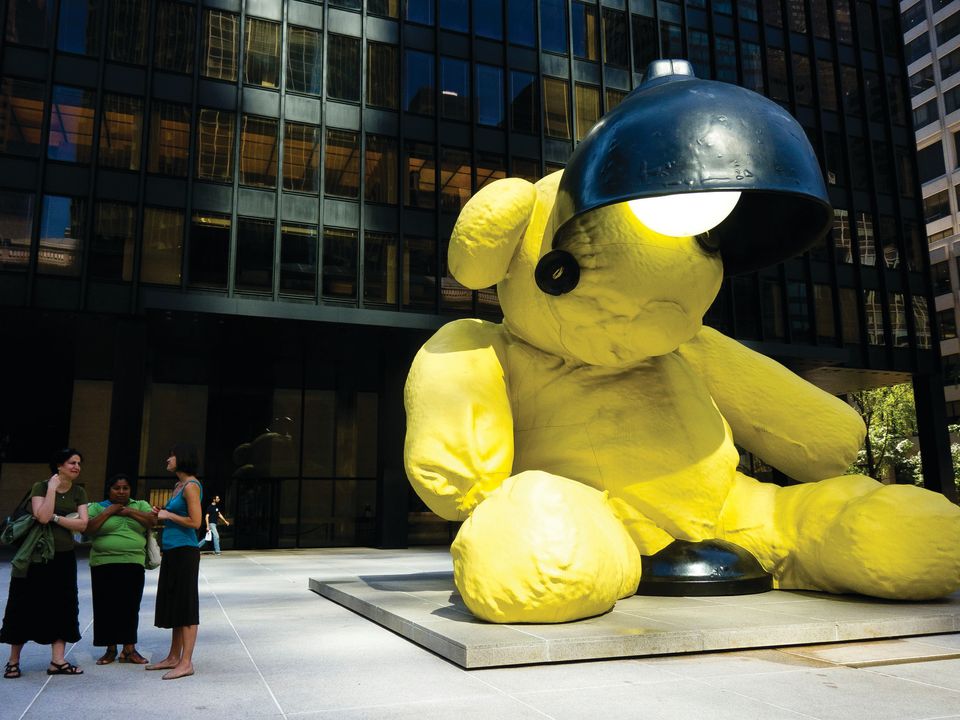 His priority now is to give a little back, he says. “Once you’ve made money and established yourself, that’s what you need to do. Where can you make a difference?”. Since 2011, he has served as the chairman of the New York Council for the Arts, a state body that was conceived by Governor Nelson Rockefeller in 1960 with the intention of preserving and expanding cultural activity through grants, and which has recently been in the doldrums.

Rosen was appointed on a five-year term by the New York Governor Andrew Cuomo, an “old friend”, to try and revive the agency, which suffered budget cuts after the recession, and came under fire last year after millions of dollars in grants were delayed because the organisation struggled to adapt to new statewide accounting systems.

He has changed the way grants are decided, brought new staff on board and lowered the average amount given.  “Originally the maximum amount for a project or operating grant was $250,000 but I brought it down to $150,000. We’re giving out around 1,850 grants a year to more than 1,200 organisations; I want to spread the money wider, let it simmer and mature,” Rosen says. “It’s a very hands-on job. We’re turning the agency around—it was tired and had fallen off everyone’s radar. There’s a lot of money in the system but the government sector just fell asleep and it wasn’t being innovative.” Rosen sees the agency as “a venture capitalist—bring capital to the arts, to the writers, to the puppeteers, the small venues. Let them elevate themselves.”

“I’m doing this for the state. I love New York City. If I can make a little dent, I’ll feel good about myself. One day, people will say ‘he did a good job’, and that will make me happy,” he says. “This is a long dance.”