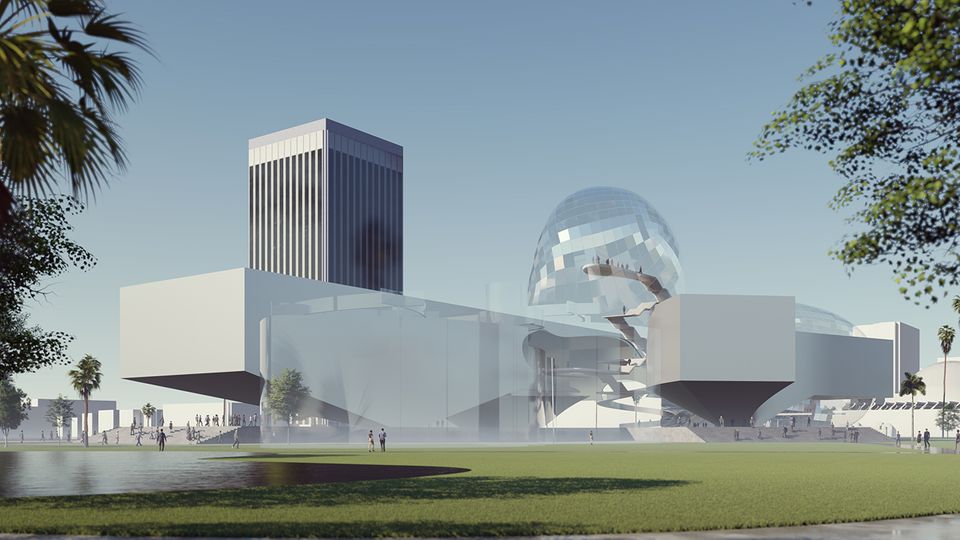 Coop Himmelb(l)au's alternative design for a building project at the Los Angeles County Museum of Art Coop Himmelb(l)au, Vienna, courtesy of the Citizens' Brigade to Save Lacma

A group protesting the design for a $750m building project for the Los Angeles County Museum of Art (Lacma) has staged a competition for rival architectural proposals, and today it unveiled six leading concepts that it hopes will generate debate.

A seven-member jury organised by the protest group, the Citizens’ Brigade to Save Lacma, will award $1,500 to each of the architecture firms that came up with the six leading proposals.

“We are not proposing any one of them be built as is, but that the public, the museum board and the County Board of Supervisors view them as inspirations to consider alternatives that truly  capture people’s eyes, hearts, and minds, and showcase the collections in a  practical and architecturally stimulating environment that embodies—rather than usurps—Lacma’s purpose and spirit,” says the writer and curator Greg Goldin, co-chairman of the Citizens’ Brigade to Save Lacma. 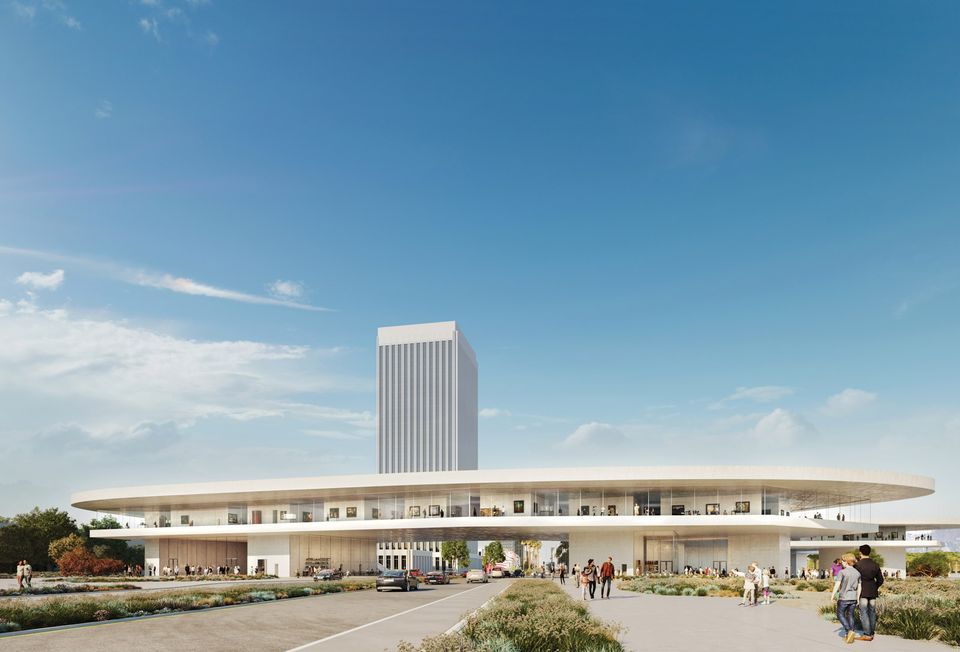 Critics like Citizens’ Brigade have argued that the current single-storey design, by the Swiss architect Peter Zumthor, will reduce square footage for gallery space, limiting the display of the museum’s permanent collection. Demolition of four existing buildings began this month to make way for the new building, which is due to be completed by 2024.

The group, which dubbed its competition “LACMA not LackMA,” said that three of the six leading proposals envision building from the ground up and three worked from architectural fabric of the museum’s campus as it existed before the demolition began. All of them enlarge gallery space rather than reducing it while providing flexible interiors rather than concrete gallery walls, it adds. None of them proposes a building straddling Wilshire Boulevard, as the current Zumthor design does, and all preserve curatorial offices and a library.

Citizens’ Brigade also contends that each of the six designs would save money per square foot, “thereby allowing county funds to be used to better serve its citizens (especially during the Covid-19c crisis”. The Los Angeles County Board of Supervisors has authorized $125 million in taxpayer funds for construction of the new building.

Lacma did not immediately respond to a request for comment on the competition. Previously the museum has denied that space devoted to the permanent collection will shrink.

Citizens’ Brigade contends that the six designs chosen by its jury “place curatorial concerns ahead of making a dictatorial architectural statement”.

The Vienna firm Coop Himmelb(l)au proposed a landscape plinth and two three-level gallery wings. Circulation on ramps connecting these components would be encased by amorphous forms whose “openness to the outside refreshes the museum visiting experience”, Citizens’ Brigade says. 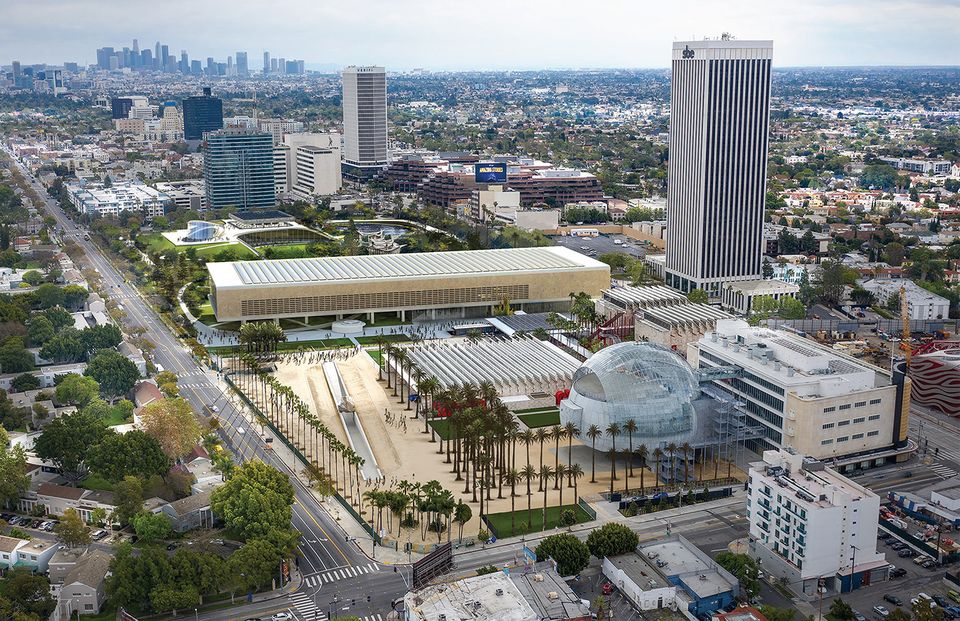 Paul Murdoch Architects of Los Angeles designed a horizontal skyscraper that “restores the continuity of the Wilshire Boulevard streetfront with a respectful attitude by placing the narrow part of the building facing the street and the broad side framing the park”, the group says. It says that the east glass façade forms a strong visual connection to nearby Hancock Park and the La Brea Tar Pits.

The Hong Kong firm TheeAe (The Evolved Architectural Eclectic) proposed a five-storey building with a garden roof with an undulating façade along Wilshire Boulevard to the south and a “hill” component sloping into the park on the site’s north side. Citizens’ Brigade praised the design for offering both enclosed cultural spaces and a sculpted outdoor landscape.

Reiser + Umemoto's alternative design for the Los Angeles County Museum of Art's campus Reiser + Umemoto, courtesy of the Citizens' Brigade to Save Lacma

Reiser + Unemoto of New York adds new elements in and among Lacma’s original 1965 buildings and blends them into a unified whole. Its proposed Cone sits within and on top of the Ahmanson Building; an elevated gallery building called the Bar crosses the campus from north to south; and a series of pod-shaped galleries and an exterior exhibition space on a plaza replaces a 1986 building.

The Berlin firm Barkow Leibinger’s proposal reconstructs the original Lacma buildings with sustainable materials and connects them with a new plinth form punctuated by courtyards. The jury cited its generous allotment of shopping, cafés and event venues that “urbanise the spaces and engender a lively environment”. 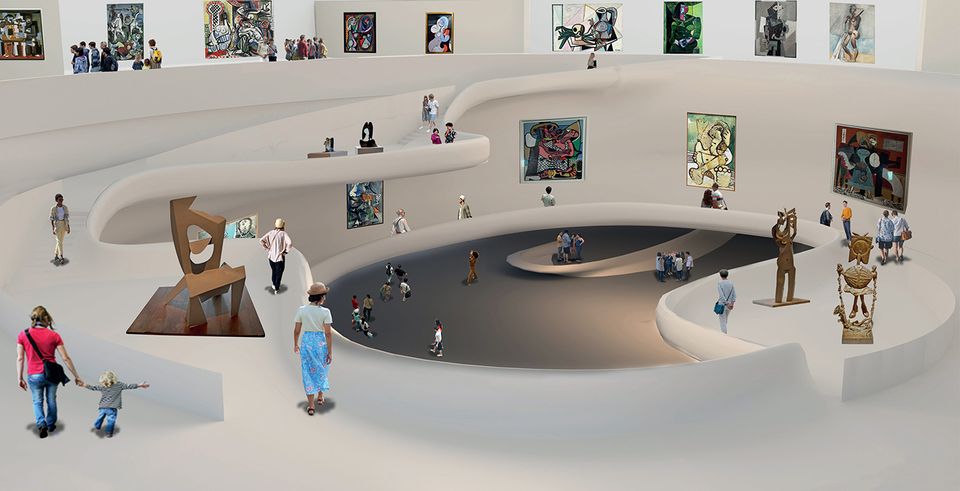 The interior of Kaya Design's alternative building design for the Los Angeles County Museum of Art Kaya Design, courtesy of the Citizens' Brigade to Save Lacma

Kaya Design of London designed a six-storey structure with spiraling ramps that would replace the museum’s 1986 building. “The biological form of the spiral–as ancient as seashells and hurricanes–gives value to the floors it connects,” Citizens’ Brigade says.

Apart from those six firms, nine submitted “ideas of merit” and will each receive $500, the group says. All 15 projects are to be featured at www.saveLACMA.org. The public is invited to vote online, and “people’s choice” selections will receive an extra $500.