The anti-racist group White Lies Matter had threatened to use the monument to Jefferson Davis as a toilet, but turned over the work unharmed 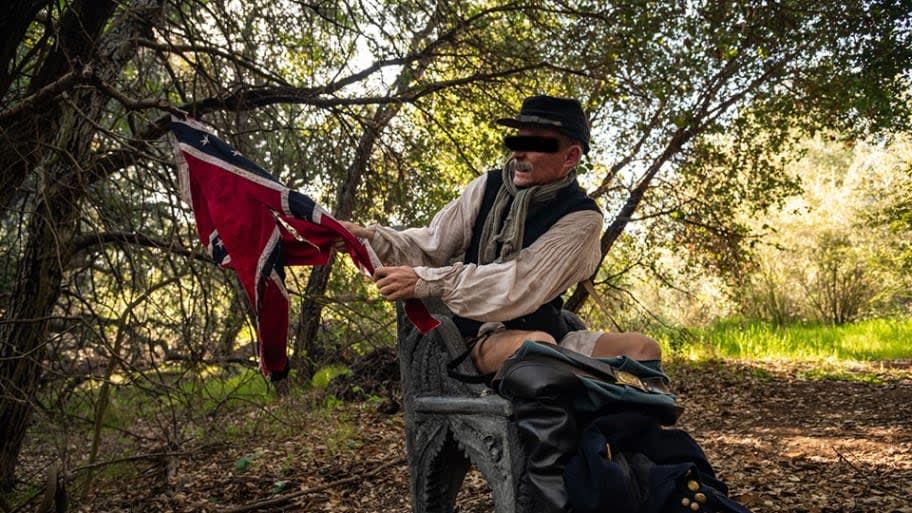 White Lies Matter had disseminated images showing what the memorial would look like converted into a toilet, with a man dressed as a Confederate soldier sitting on it Photo: White Lies Matter

Arrests have been made in connection to the Jefferson Davis monument that was taken last week from an Alabama cemetery, and held under threat of being turned into a toilet. Two people, Stanley Warnick, 32, and Kathryn Diionno, 24, have been charged with possession of stolen property by police in New Orleans, where the monument was recovered, and authorities are currently looking for a third, Stanley Pate, 34, who they believe was also involved.

The memorial, a stone chair which weighs several hundred pounds, was presented in memory of Confederate President Jefferson Davis in 1893, and is owned by the United Daughters of the Confederacy (UDC), who valued it at $500,000. UDC have confirmed that they are once again in possession of the chair.

An anti-racism group White Lies Matter claimed responsibility for the theft, and had threatened to turn the chair into a toilet unless the UDC agreed to hang a banner outside of their Virginia headquarters with a quote from Black Liberation Army activist Assata Shakur.

On top of the charges in New Orleans, the three also face felony charges of extortion and theft in Alabama, according to the local district attorney. Both Warnick and Diionno denied any involvement with White Lies Matter “or any other political activism group”, according a lawyer representing Warnick. “It comes down to just a mistake,” Michael Kennedy told the New York Times. “Clearly, an unfortunate one, but a mistake.”

White Lies Matter had disseminated images showing what the memorial would look like converted into a toilet, with a man dressed as a Confederate soldier sitting on it, but in a statement released to the media on Thursday, they said that the chair in those photos was a replica. “Obviously, we had always intended to return the chair,” the group said, adding that the entire prank was conceived to highlight a history of American racism. “Why did we steal a chair? To make a point. To redirect the conversation back to what matters, people, not property.”

“We did our part—and do not mistake it, it was not the part for heroes, but the part for idiots,” the statement reads. “The real heroes are in jail cells, in graves, in history books where they continue to fight for how honest we are willing to be about the narrative behind the flag.”