Culture on the frontline: Penn Museum shows artefacts curators are fighting to save in Syria and Iraq

Exhibition features ancient objects and Medieval manuscripts, along with contemporary commissions by a Syrian-born artist

Many US museums have been closely monitoring the on-going destruction of heritage sites in Syria and Iraq. But few have had boots on the ground like the Penn Museum. The Philadelphia institution’s curators and researchers have been on the frontlines of the battle to safeguard cultural heritage in conflict zones. Now, they have organised an exhibition that seeks to illustrate just how high the stakes are.

Cultures in the Crossfire: Stories From Syria and Iraq (8 April-26 November) presents more than 50 artefacts from the museum’s collection, including a funerary relief from Palmyra (1st-2nd century CE), a 16th-century glazed terracotta tile from Damascus and Arabic illustrated manuscripts on complex mathematics, music theory and astronomy. Many of the objects were originally excavated from areas that have been torn apart by the Syrian civil war.

“This is where writing was invented—and in medieval times, it is home to the first education centres,” says the Syrian archaeologist Salam Al Kuntar, who co-organised the show. “We want to give a brighter image of these places and remind people that this episode of destruction is brief in the course of history.” 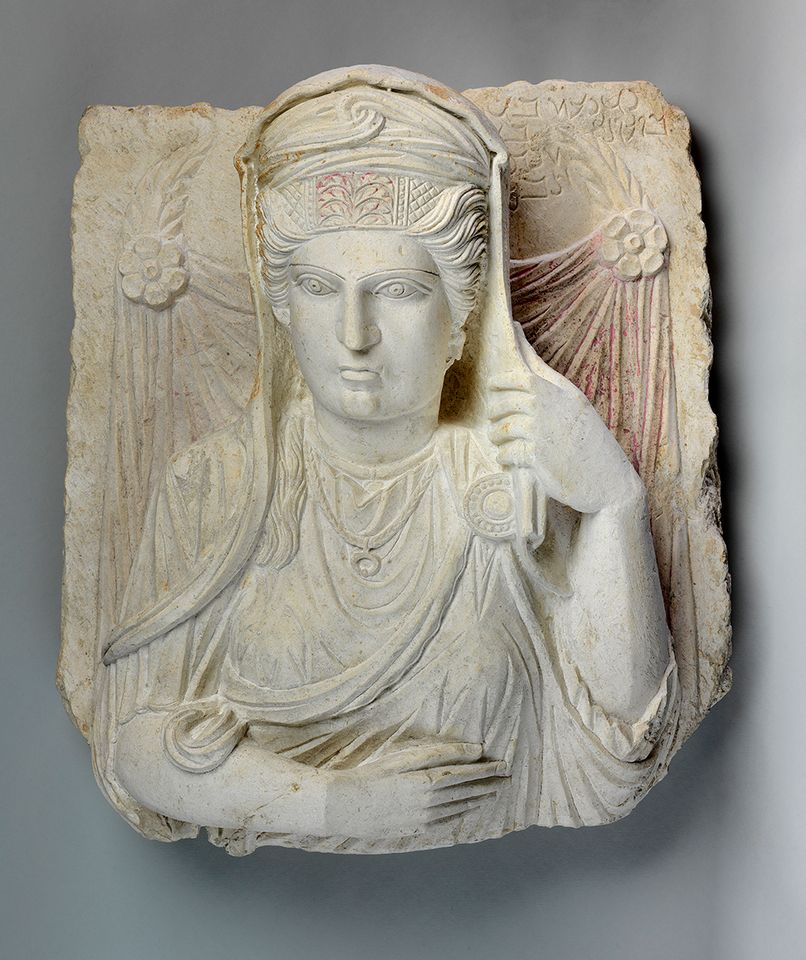 Palmyrene Relief.jpeg Palmyrene Relief Mortuary Portrait of Yedi’at Limestone 1st-2nd centuries CE (Roman) Palmyra, Syria Lavishly dressed and heavily draped, woman lifts the edge of her veil as a gesture of piety. A Palmyrene inscription identifies her: “Yedi ‘at, daughter of Si’ona, son of Taime, Alas!” Dating to the 1st and 2nd centuries CE, funerary portraits like this one of wealthy patrons demonstrate the complexity and richness of Palmyrene identity. These busts combine Roman sculptural elements and local stylistic elements. Some of these portraits were accompanied by inscriptions in the Palmyrene dialect of Aramaic. (Object B8905)

The Penn Museum is home to on of the largest collections of artefacts from Iraq and Syria in the US. The show includes a Hebrew tombstone, an eye idol, and pages from the Qur’an to illustrate the religious diversity of the region, while glass pitchers, gold ornaments and ivories highlight its history as a trade hub.

In an effort to connect the past to the present, curators have installed newly commissioned works by the Syrian-born artist Issam Kourbaj throughout the show, including an installation inspired by 5th-century Syrian boats. Documentation of the Penn Cultural Heritage Center’s recent preservation efforts is also on view. The centre has proactively documented collections in northern Iraq and helped fortify 1,600 sq. ft of Roman and Byzantine mosaics at a museum south of Aleppo.

Al Kuntar, who is originally from Syria, notes that US museums do not always effectively communicate the complex histories of ancient objects in their collections. She hopes that the more that visitors learn about where these objects came from—and how they ended up in the US—the more invested they will feel in the fight for preservation.

“I don’t feel that Western museums can continue to exhibit artefacts that were taken in some kind of unethical way and to continue showing these objects with no connection to their place of origin,” Al Kuntar says. “The Penn Museum is lucky in a way because a lot of our collections come from proper excavations. But it’s important [to acknowledge the context from which these objects came]. What can an ancient artefact tell you if it doesn’t tell you  who made it, where it was made, and what it was made for?”