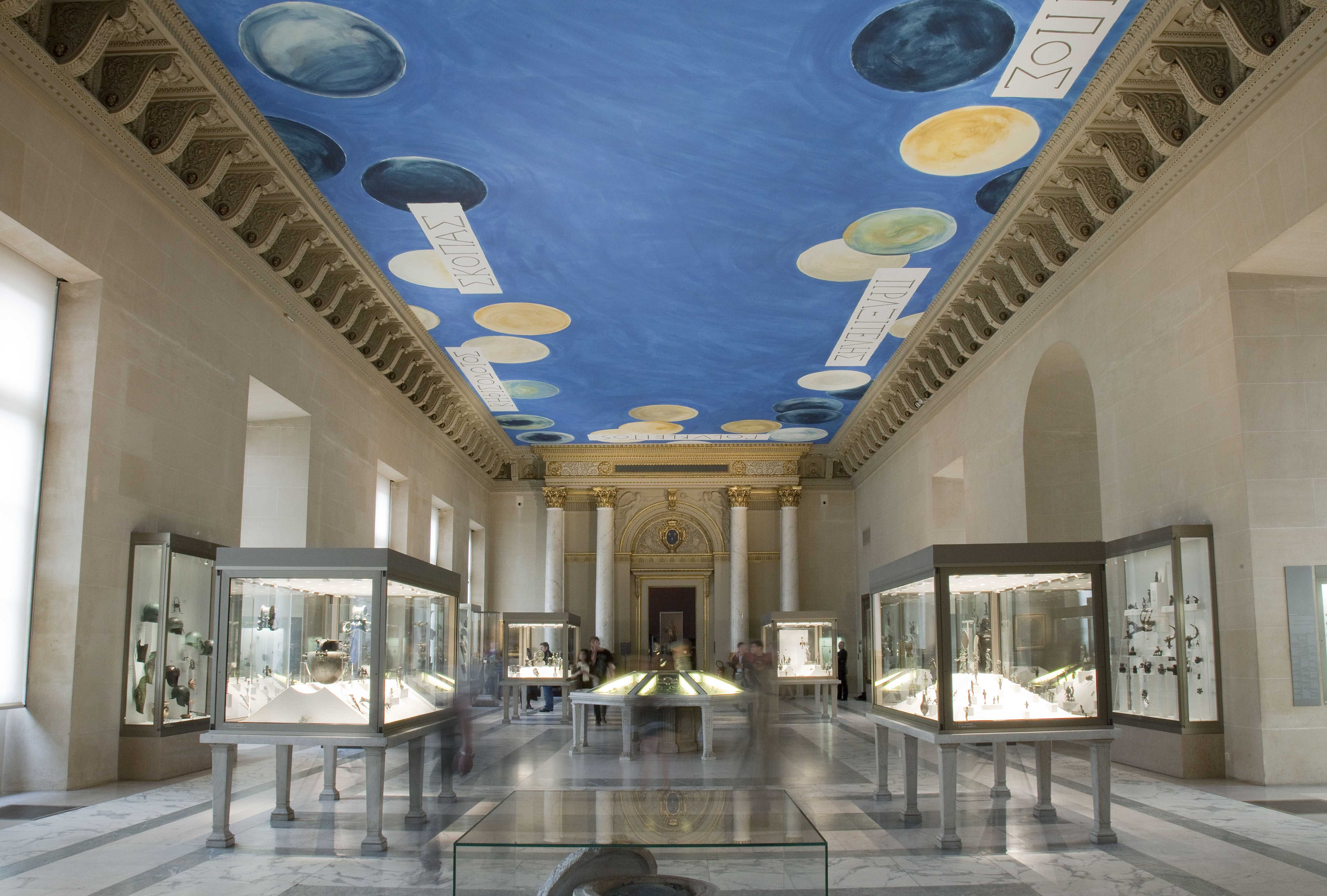 The Cy Twombly Foundation has threatened the Musée du Louvre with legal action after the museum renovated a gallery that bears a ceiling painted by the US artist, according to the French newspaper Le Monde. While the ceiling remains undamaged, the surrounding changes to the walls and objects on display have altered Cy Twombly's painting, the foundation says.

In 2010, just one year before his death, the artist was invited to add a monumental 350 sq. m installation to the Salle des Bronzes, which, at the time, displayed Roman and Greek bronze sculptures. Twombly’s ceiling painting features spheres floating on a blue background with inscriptions paying homage to Hellenistic sculptors. “The foundation was shocked to learn about [the gallery's] recent redecoration,” says Nicola del Roscio, the chairman of the Cy Twombly Foundation, a private organisation that aims to study and preserve the work and legacy of the artist. “Taking as his starting point the white stone walls that reflect natural light, [Cy Twombly] conceived a ceiling that is a light floating canopy in subtle colours,” he adds. “The deep red that has been introduced [to the walls] violates these harmonies and entirely destroys the balance of his sensitive and memorable installation.”

The foundation’s legal counsel, David R. Baum, who is also acting on behalf of the artist’s son Alessandro, wrote to the Louvre's director, Jean-Luc Martinez, on 1 February to challenge an “alteration that was made without any consultation with, much less permission from, the foundation.” He requested the “urgent intervention” of the French culture minister Roselyne Bachelot, demanding an “immediate correction” by the museum. The foundation is “absolutely prepared to file a lawsuit in court,” Baum tells The Art Newspaper, adding that it was also surprised to learn that the gallery will no longer house antique bronzes but rather a new display of the Etruscan collection.

The Louvre has no intention of reversing the works that are already well advanced, says Vincent Pomarède, the deputy managing director at the Louvre. Hoping to “calm things down”, the museum wishes to “talk to the foundation”, he adds, insisting that the ceiling has not been touched. “The museum is a living body,” Pomarède says. “[The Louvre] made this explicit to Cy Twombly, as we do with every artist working with us. In the preamble of the contract [with Cy Twombly] it was made clear that the museography could change. How could it be otherwise?”

The Salle des Bronzes is one of the very few galleries that has not seen any change since the 1930s, other than Twombly’s intervention. “Each room of the museum is repainted two or three times a century,” explains Pomarède, who stresses that other galleries with ceilings painted by artists as Delacroix or Braque have also undergone changes. “We need to change the display cases, review the spaces, update the safety standards, revise the display of the collections. There was a time when museums preferred these white or light grey colours, now they're all coming back to deeper colours," he says. "Personally, I find Twombly’s ceiling is even better showcased now," he concludes. "The [Cy Twombly] Foundation has not seen the gallery yet, so they are welcome to come and judge for themselves.”