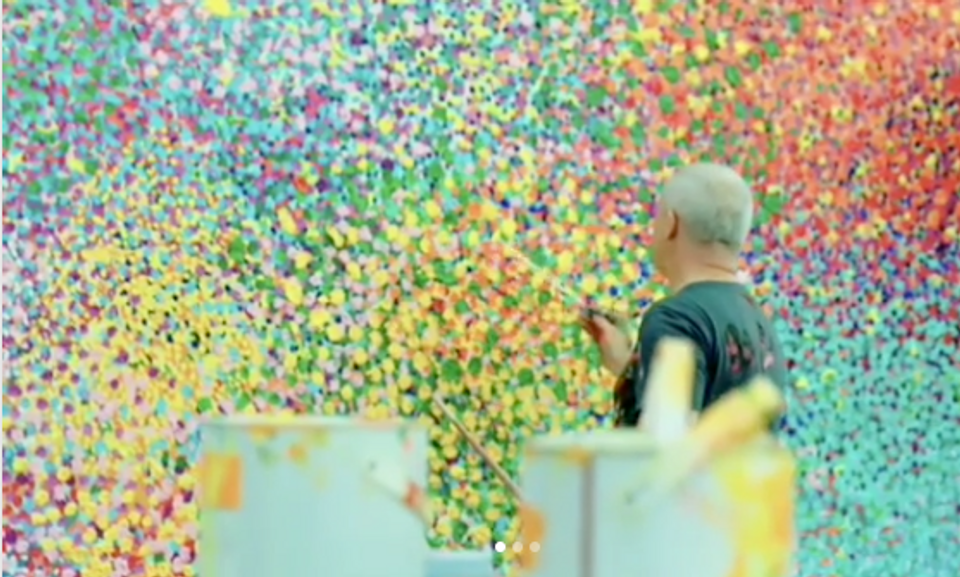 Damien Hirst has taken spot painting to the next level in a new series of works created in pointillist style blobs of vividly coloured paint that he describes as “big abstract Bonnard paintings”.

The “veil paintings” are due to go on show at Larry Gagosian’s Los Angeles space on 1 March (until 14 April), in what will be Hirst’s first exhibition in the US since returning to the gallery in 2016. His last show there was The Complete Spot Paintings in 2012.

But the former YBA has already given onlookers a private view of his latest vibrant canvases on Instagram. Hirst describes how he was inspired as a student by a show of works by Willem de Kooning and Pierre Bonnard at the Centre Pompidou in Paris. “Both artists blew me away,” he says. “I’ve always loved Bonnard and his colour. How can you not love colour? Sunlight on flowers, fuck everything else.”

Not one to eschew an egalitarian approach to art, Hirst likens the surface of the works to Iced Gems biscuits, a childhood favourite for British children growing up in the 1970s and 1980s. “The texture of these paintings reminds me of some sweets I used to get from my gran as a kid,” he says. “They were in a bag like crisps and were a dollop of brightly coloured icing sugar squeezed from an icing bag on a small round tasteless biscuit base.”

I’ve always loved Bonnard and his colour, i went to see a show at the Pompidou in Paris of de Kooning and Bonnard when I was a student and both artists blew me away. These paintings I’ve made, which i’m calling the Veil paintings, will be shown at Gagosian LA in March. . . They’re like big abstract Bonnard paintings, I’ve been playing with the scale and the big ones feel perfect. how can you not love colour? Sunlight on flowers, fuck everything else . . #veilpaintings #colour @gagosiangallery

Hirst also draws parallels with the album cover the British art director and graphic designer Peter Saville created for Joy Division’s Unknown Pleasures. “If you look closely the paint is like mountains and valleys on an insane coloured planet,” he says.

The new works recall Hirst’s Visual Candy paintings from the 1990s, daubed paintings that reference both Impressionism and Abstract Expressionism. Hirst has also been working on a new series of “colour space” canvases, inspired by his early spot paintings, which go on show next month at Houghton Hall in Norfolk. His first spot painting, created in 1986, two years before he conceived and curated the trailblazing Freeze exhibition, was loosely painted with dripping pigment, “not minimal at all”, Hirst says.

“In that first [spot] painting, I was wrestling with what I originally thought of as the coldness of Minimalism and the more emotional, abstract expressionist painting style I’d grown up with. At the time I painted it, it felt uncool and I abandoned it immediately for the rigidity of the grid, removing the mess,” Hirst says. “But after doing the spot catalogue raisonné I’ve felt really drawn to that first painting and knew I’d revisit it eventually–maybe it’s because I’m getting older. I realised I was wrong about Minimalism–the simplest, cleanest thing can provoke an emotional response.”