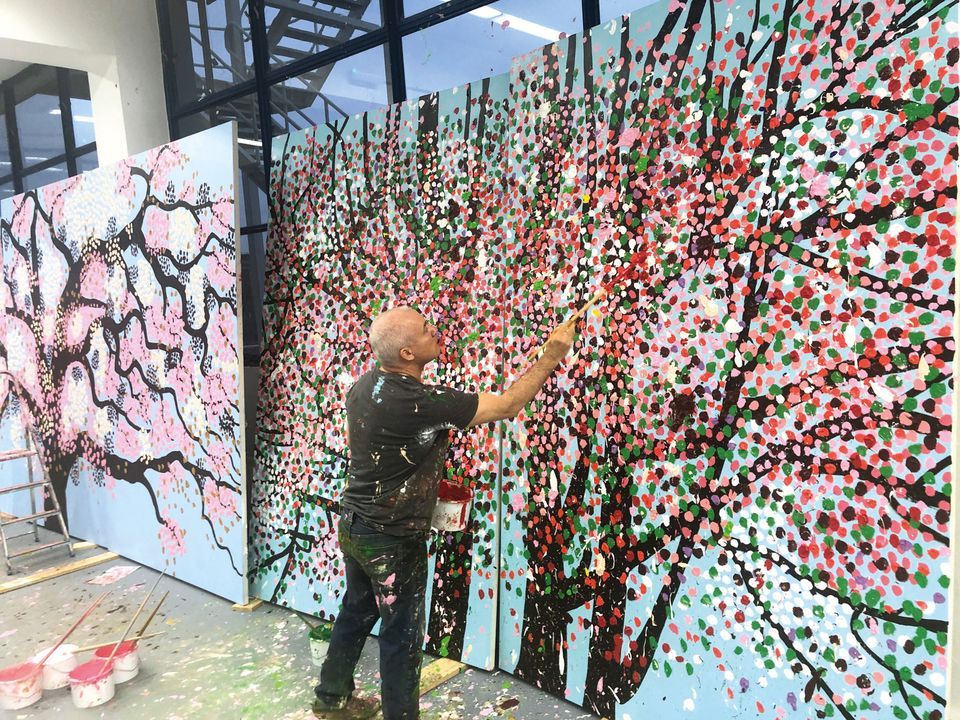 After nearly two years in the studio, Damien Hirst has announced he is due to exhibit his Cherry Blossom oil paintings at the Fondation Cartier in Paris next June.

Hirst revealed his plans for the show on Instagram on Monday, posting videos of him in his Hammersmith studio daubing candy pink blotches on chocolate boughs against powder blue backgrounds. There are 90 works in the series, although it is not clear whether all will be shown in France. Full details are due to be announced in mid-November.

The former YBA, who spent almost ten years working on his 2017 Venice show, Treasures from the Wreck of the Unbelievable, before returning to painting says he is “working like mad” to complete the cycle, which includes diptychs and triptychs. Meanwhile, Hirst will continue to post videos “to show you how much fun I’m having in the studio”. He says he feels “like a kid in a sweet shop, can’t stop painting!”, adding: “Who said cherry blossoms are dark?”

Back in May, Hirst told The Art Newspaper that he “hopes you can see the irony [in the paintings] as well, because they feel like they’re celebrations of avoiding something”. With this in mind, perhaps, in another Instagram post he says: “There’s something dumb about the beauty of cherry blossom.” The socialite Paris Hilton, who appears to be a fan, simply replies: “Beautiful”.

Hirst, who decided to create the whole Cherry Blossom series before unleashing them on the art world, say he was last painting in around 2008 when his friend Angus Fairhurst killed himself. “I was painting those really dark blue paintings—they’re very derivative, like Bacon’s—and I was feeling like I was in 1953 and wondering what the hell I was doing. It got worse after my friend committed suicide,” he says. For almost ten years after that, Hirst threw himself into the production of Treasures, which cost a reported $65m.

Just before that show opened, Hirst rented his London studio “and then it just exploded”. Even then, however, the idea to paint cherry blossoms “seemed really tacky”, he says, “like a massive celebration, and also the negative, the death side of things”.

To begin with, the paintings “looked like bad versions of Hockneys”, Hirst told us. “So, I was thinking: ‘Shit, maybe this is a disaster’.” But, as he worked on them, getting rid of some branches and adding others, “they started to have that feel”, he says. “They seemed between something representational and something abstract, which is what I like.”

Hirst hinted in May that the paintings might be shown in Paris or Rome. “That’s the joy, really, of finishing them before you do anything, because you can look at different places. Or not show them; you can just wait," he says. It would appear Hirst no longer has that luxury, but is relishing the challenge of finishing in time.